The I Hate to Cook Book: 50th Anniversary Edition 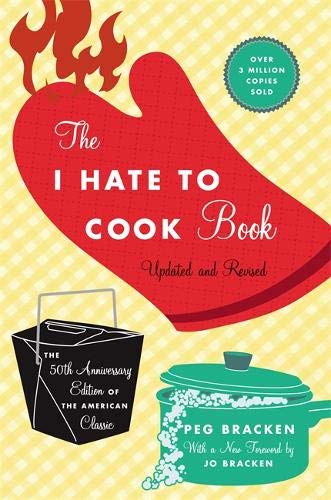 Long Before Food Network personalities Rachael Ray and Sandra Lee showed us how to turn out worthy meals in record time, there was Peg Bracken, an over-stressed working mother who unapologetically wrote The I Hate to Cook Book in 1960. With a healthy dose of humor, she set out to convince women that with the help of a few ready-made ingredients like frozen vegetables, canned soup, and onion soup mix, you could whip up a meal in no time and not miss out on the cocktail hour.

Now, 50 years later, and just in time for the new season of “Mad Men” (the popular TV series which takes place in the early 1960s) we are being treated to the 50th anniversary edition of this once popular cookbook which offers a (sometimes horrifying) glimpse into the way we once cooked and ate. Make no mistake, when it comes to the evolution of American cooking and gender roles, we’ve come a long way.

Back in 1960 it didn’t matter whether you liked to cook or not, if you were a woman, the cooking fell to you. The I Hate to Cook Book was written “for those of us who want to fold our big dishwater hands around a dry Martini instead of a wet flounder, come the end of a long day.” It was born out of “a luncheon with several good friends, all of whom hate to cook but have to. For variety’s sake, we decided to pool our ignorance, tell each other our shabby little secrets, and toss in the pot the recipes we swear by instead of at.”

For sheer entertainment value, the recipes in this book cannot be beat. Whether you were raised in the 1960s, cooked during the 1960s or just want to know what Don and Betty Draper of “Mad Men” are eating, The I Hate to Cook Book will either leave you chuckling in recognition or shaking your head in utter amazement. Here is a sampling of what’s in store:

Cancan Casserole, described as “the easiest tuna casserole that ever happened,” is made with (you guessed it) canned ingredients like evaporated milk, cream-style corn, and tuna along with eggs, green pepper, and grated onion. The instructions tell you to “pour it all into a buttered casserole dish and bake it, uncovered, at 325º for one hour.” Imagine, by the time you’ve finished opening all the cans and dumping everything into a casserole dish, your husband will have mixed and poured your martini! (Given that it takes a full hour to bake you’ll even have time for a second one—which you will need in order to fortify yourself for the meal you are about to eat). Now that’s a clever recipe.

Or how about this one for all of you whose mothers used to serve meatloaf (which was never made the same way twice): Swiss Loaf, described as a “somewhat more interesting sort of a meat loaf,” is made with hamburger, diced Swiss cheese, and the usual seasonings, milk, and bread crumbs. “Just mix these things [not ‘ingredients,’ but ‘things’] together in the approximate order they’re given, then press it all into one big greased loaf pan, or use two. Bake, uncovered, at 350º for about an hour and a half, then yodel for the family.” Pity the poor woman who used two loaf pans instead of one and cooked them for an hour and a half. Maybe that’s why Peg Bracken referred to it as a “sort of meat loaf.” A “sort of concrete brick” would have been more like it.

While she wrote the book ostensibly for women who hate to cook, Peg Bracken’s voice is that of every woman who feels the pressure of having to cook or entertain when she’d rather not. “A thing to beware of, when you hate to cook, is the taut, dogged approach when you’re faced with cooking for company,” she writes. “Listen: if, by some odd happenstance, you should put together a perfect little symphony of a dinner, with no slips or absent-minded moments, you might scare some of your female guests to the point where they’ll never invite you to their house!”

Her recipes may have been questionable, but her advice was rock solid. The I Hate to Cook Book went on to sell three million copies and Peg Bracken went on to become a spokesperson for Birds Eye frozen food. Because of Peg Bracken, women everywhere started to give themselves permission to get out of the kitchen and get on with their lives. For that, we all owe her a debt of gratitude.

Fortunately for all of us, however, Julia Child’s Mastering the Art of French Cooking and Craig Claiborne’s The New York Times Cookbook would be published a year later and we would thankfully move on to better recipes.