I Don't Know: In Praise of Admitting Ignorance (Except When You Shouldn’t) 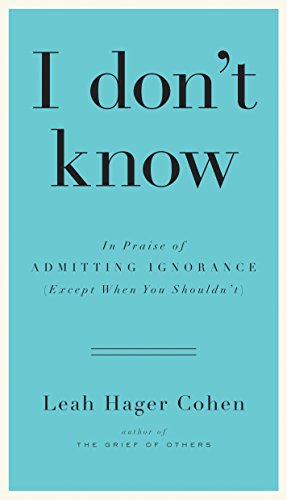 Contemporary society frowns upon uncertainty. Admitting ignorance or uttering those three words, “I don't know,” can be a frightening experience for any student or employee.

I Don't Know: In Praise of Admitting Ignorance (Except When You Shouldn’t) has author Leah Hager Cohen exploring this topic through a variety of disciplines including anthropology, sociolinguistics, neuroscience, philosophy, cognitive psychology, and fairy tales. This slim hardcover packs in plenty of information and does so in a way that entertains and enlightens. Like a Science Friday broadcast, one can read this short book during a couple of commutes.

Ms. Cohen begins her investigation with a personal anecdote. When she was in her first week as a journalism graduate student, she had difficulty finding the “nut graph.” Later she realized her error, since she was actually supposed to look for the nut graf (“graf being journalism slang for paragraph”[italics in original]).

The point of the story involves her being too afraid to ask, since it might expose her ignorance. Exposing one's ignorance in a university classroom can be a fatal thing. This leads to a discussion on the Harvard cheating scandal:

“If a student displays inadequately, if she baldly confesses, ‘I don't know,’ she may find access to these [career and financial] opportunities restricted. No wonder students are often fearful of acknowledging what they haven't yet mastered–or simply don't get.”

Another discussion involving truth-telling has Ms. Cohen investigating fairy tales and the story of Rumpelstiltskin. There's also a lively discussion on the story of The Emperor's New Clothes, since the story ridicules the pompous and ridiculous. Unwilling to be thought stupid, everyone from the peasants to the emperor's closest advisers lie about the beauty of the emperor's new clothes.

Later in the book, Ms. Cohen explores the issues of intuition, false confessions, and medical errors. After an obstetrician let an intern perform a surgery, “the new intern and the chief went to visit the patient together as she lay in recovery, and the chief delivered a lesson that only reinforced the professional premium on concealing uncertainty. Rather than telling the truth, he delivered a self-serving lie.”

While Ms. Cohen elaborates on the dishonest thuggery associated with the Holocaust, it is surprising that the American medical profession would instill this type of professional dishonesty. The patient's desire for certainty in diagnosis and treatment does not involve being victimized by careerists and the self-serving.

On the topic of the Holocaust, Ms. Cohen explains how the Nazis perpetrated elaborate hoaxes to cope with the psychic dilemma of “knowing and not knowing the atrocities they were committing.” This exploration leads into a passage where she tells of an Israeli Defense Forces soldier experience the cognitive dissonance of Israeli propaganda and witnessing its results.

On the one hand, Israel justifies its existence as a result of the Holocaust in Europe. On the other hand, the soldier witnessed prickly pears and olive groves in an Israeli park as evidence of former Palestinian residents. “On a national level, you want to forget forget that there were fellow human beings who paid a price—and continue to do so—for you having a homeland.”

It is to Ms. Cohen's credit that she links the devastation of the Holocaust with the equally devastating removal of Palestinians from Israel. Only the intellectually dishonest would imply she has an anti-Semitic agenda. Ms. Cohen remains a journalist of integrity, not a nationalistic shill like so many American and Israeli political opportunists adept at the subtle arts of selective memory, naked careerism, and colonial conquest.

Ms. Cohen covers a lot of material in her slim book. She does so with a light touch and an ability to capture the sparkling nugget of the story. I Don't Know: In Praise of Admitting Ignorance (Except When You Shouldn’t) educates and entertains in equal measure, with historical episodes interspersed with personal experiences.