I Don't Know How the Story Ends 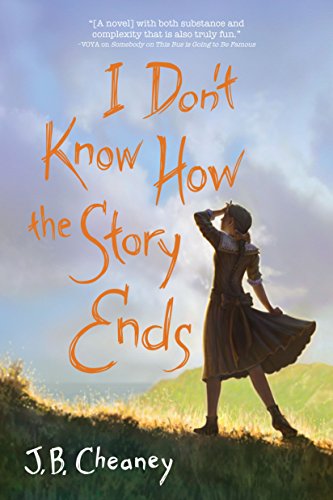 If ever a story cried out to be conveyed as a graphic novel it’s this one. I Don’t Know How the Story Ends tells of four children who, in 1918, traipse about Hollywood shooting a short film. Los Angeles was then a land of unpaved roads, orchards, and meadows; and movie making was in its infancy. Charlie Chaplin, Douglas Fairbanks, and Mary Pickford were the reigning stars.

All three of these actors make appearances in the novel, and Cheney does offer occasional references to hats, gloves, and gramophones to evoke the era, but the main characters seem like contemporary actors on a set. Cheney clearly did her research and does a good job of describing an early-century movie theatre, far different from today’s multiplex cinemas, but she could have done more to make this time period come alive.

Isobel and her six year old sister Sylvie are spending the summer in Los Angeles with their mother at the home of their Aunt Buzzy. The girls’ father, a doctor, has enlisted and is overseas in the Great War. Aunt Buzzy has married a “very wealthy man” who has a son, Ranger. Ranger, 13 years old, has an indomitable spirit and the unquenchable dream to become a movie director. He’s convinced that his career hangs in the balance with the making of this film. This is a boy with a goal and something at stake. He could have made a compelling narrator for this tale.

But it is Isobel who narrates. She doesn’t want to be in California, initially cares nothing about movie making, and often comes across as priggish, oddly formal, and older than her 12 years. She describes a room in her aunt’s house: “Indian silks shimmered in the windows, Persian carpets rioted on the polished floor. Bronze lanterns beaten with Fiji hammers glared fiercely from the rafters . . .” Fiji hammers? It would take a pretty sophisticated 12 year old to recognize such an item, let alone describe it thus. When she first arrives in L.A., she says of the heat: “It wasn’t just strong—it was muscular, like a burly masseuse at a Turkish bath, kneading our arms and faces and backs . . .” Hm.

Ranger, Isobel, and Sylvie are joined in their filmmaking endeavor by Sam, whom Isobel guesses is around 15. What with his smoking, gruff manner, and scrappy attitude, he comes across as quite authentic to the time period and a refreshing contrast to the other, rather privileged children. His father is in the film business and does not to want his son to follow in his footsteps. When Sam “borrows” a camera to shoot their film, Dad gives him a shiner.

Despite constant setbacks, the wily children manage to get the necessary scenes shot and their film made. While their discussions about establishing shots and film editing are interesting, they are also confusing, in part because the setbacks the children encounter require them to make constant revisions to their story. But more than that, long paragraphs of exposition describing scenes are hard to parse. It’s not for nothing we have the expression “a picture is worth a thousand words.” Accompanying pictures would have greatly enhanced the text.

Cheney could also have done more with the father away at war. On the train to Los Angeles, Isobel has a visceral reaction to the significant war wounds of a returning soldier. Beyond that, and a War Bonds rally (which the children view as a prime opportunity to shoot a scene for their movie) we hear little about the war, or much about Isobel’s father.

There’s an interesting twist when Isobel suspects her mother of having a dalliance with Charlie Chaplin, but that proves a dead end. Overall the novel feels a bit like an Andy Hardy caper, without Micky Rooney’s effervescence and Judy Garland’s magical voice.

The story takes off in the final few scenes when Isobel learns that war changes everything and that movies are not real life and sometimes not even a realistic representation of life. But movies can offer an escape when life overwhelms.

A good novel can do that as well. While Cheney includes plenty of historical information on filmmaking, interesting in this age of digital editing and computer graphics, sadly, I Don’t Know How the Story Ends doesn’t quite deliver on that promise.