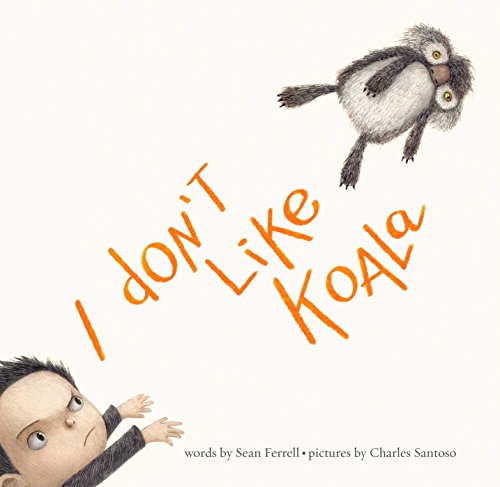 Every so often picture books come around that promise not just a new take on a familiar story, but something at least a little bit original—and the heart rejoices. And every once in a while they come around with illustrations so captivating that one is certain only the most egregious literary offenses could ruin their effect.

The cover alone of I Don’t Like Koala offers both of these tantalizing teases: a darkly intriguing boy-hates-toy story and gorgeous, meticulously rendered art. The hopeful reader is almost afraid to actually open the book, lest it fail to deliver on its promise.

Charles Santoso is an Australian concept artist whose fine art has been exhibited around the world. He has illustrated several picture books, but this effort will surely make his name in that realm.

The art here—and it can only be called art—is beautiful. Digitally colored and texturized pencil work gives the characters a simultaneously wooden and lifelike appearance that compels the reader to lean in for a closer look. And every illustration—every piece of spot art—feels like a frame-able gem.

Sean Ferrell (a novelist and short story writer) begins the book in a delightfully unexpected way. A boy, Adam, gladly accepts a gift, only to back away from the box when what emerges is the “most terrible terrible” Koala, a disagreeably inert lump of a thing with off-kilter eyes that follow him wherever he goes.

But it’s not just the Koala’s eyes that follow poor, creeped-out Adam. It’s all of Koala, who keeps appearing “In his bed. On his pillow. Closer than close,” no matter how many times he tries—or how far he goes—to get rid of him. And of course Adam’s parents are of no help, whatsoever. They see nothing wrong with Koala.

And just when all of this demented fun is apparently undermined by a typical saccharine climax (Adam bonds with his terrible terrible when he needs comfort on a stormy night from a more terrible terrible), we are saved by a coda in the form of a not-quite typical final parents-peeking-in-on-happily-sleeping-child scene. Not quite typical because, in this version, the Koala, wide awake next to snoozing Adam, has its dreaded eyes fixed on dad now, who now tells us, “I don’t like Koala.”

If you’re looking for something different, you won’t either. You’ll love it.