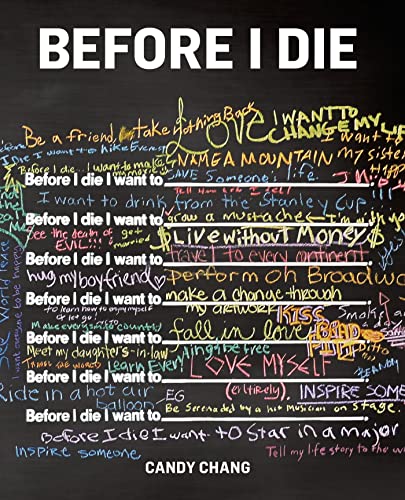 “Before I Die is an undeniably inspiring concept.”

Artist, designer, urban planner, and author Candy Chang focuses on how people impact places and how places impact people. Her new book Before I Die is a coffee table volume depicting Ms. Chang’s public installation that has drawn an unexpectedly vigorous response, embraced around the world.

Ms. Chang’s “Before I Die” journey began with a single installation, a blackboard wall erected on the side of a rundown house in New Orleans. On this wall she repeated the text: “Before I die______________.” Along with the blank space she left containers of chalk to beckon responses from passersby. In short, the response was enormous. Her wall concept went viral.

Conversations involving the mere mention of death are fraught with angst and often avoided altogether. Ms. Chang began her initial, relatively modest public dialogue as a means of addressing unreconciled feelings she experienced over the loss of someone dear in her life.

“Regularly contemplating death as Stoics and other philosophers encourage, is a powerful tool to restore perspective and remember the things that make your life meaningful. Thinking about death clarifies your life.”

The public forum coupled with the unexpectedly frank inquiry inspired people to think and then pick up a piece of chalk to write their answers. As the responses accumulated, sometimes two or three per line, the New Orleans wall emerged as an emotion filled tapestry embroidered with fear, hope, gratitude, pain, joy, and longing.

In response, Ms. Chang and friends encouraged this project’s growth by creating a helpful website that offered a make your own wall template. Thus far, 200 walls have been constructed. The book Before I Die depicts in images and text these many walls. The text is spare, including brief opening chapter pieces about wall organizers (individuals and organizations) as well as much text contributed by participants.

Before I Die is an undeniably inspiring concept. Ms. Chang is to be lauded for initiating this public conversation, the scope and impact of which is truly impressive.

As a coffee table book, Before I Die is a useful record of the many walls, but not as compelling as the actual global project. It is not as visually rich as other books in this category.

The images are informational but not aesthetically pleasing. Pages abound with what unfolds as repetitious visuals of Before I Die walls. And while the international scope of the project is a noteworthy comparison of human inclinations by culture and geography, the profusion of walls on page after page lacks the impact of viewing an actual wall.

Additionally, the text appearing as a collage of boxes, three or four to a page, each box featuring one Before I Die wish in bold white text, comes across as less poignant, almost trite, when clumped together in this manner. This is unfortunate as one easily senses that the actual project is anything but banal.

Details of the Before I Die project are found on its website. And so, as a practical matter, the book’s primary value is that it provides a supplemental and useful toolkit for those who may be inspired to reproduce the installation.

The vignettes describing the various walls offer useful background for one planning a wall. And the final chapter, “How to Make a Wall,” is, as stated, an actual guide for creating a Before I Die installation.

Putting aside the book, what is truly noteworthy is how Ms. Chang’s effort to boldly and publicly confront death galvanized a movement that reaches into the core of what makes us all human. With both rare and unique eloquence, it unites people in shared expression of hopes and dreams, encouraging all to take a hard stop and truly consider what makes our time on earth meaningful.

The project represents a harmonious joining of art and social activism. The overall experience of the book, however, is largely flat. One hopes that it will increase awareness of the walls and, as noted, serve as a tool in creating more of these.