I Am a Girl from Africa 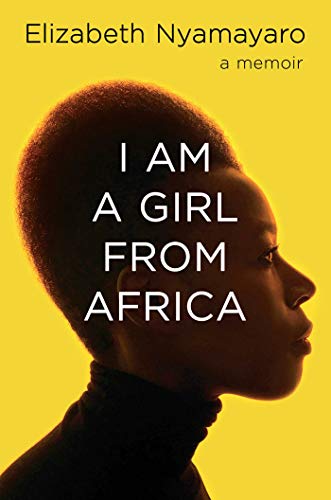 Illuminating and uplifting, I Am a Girl from Africa is a must-read.

Elizabeth Nyamayaro begins her story as a young girl, when she was dying of thirst and starvation in a drought. A United Nations (UN) aid worker finds her face down in a field, unable to move. Revived with porridge, water, and the idea that Africans must take care of one another, Nyamayaro becomes galvanized to help the people and nations of Africa by becoming involved with the UN. Lofty dreams for a starving child.

Through opportunity, determination, and the commitment of her family, Elizabeth is able to reach her goals and give back to the communities she loves.

While I Am a Girl from Africa deals with the heavy subjects of HIV/AIDS, food insecurity, and women’s roles in development, the book’s tone is hopeful, even playful. Nyamayaro masterfully brings in African cultural concepts to uplift a story that could become dark. She sprinkles Shona language into the text and uses the Bantu tendency to double a word for emphasis. Each chapter begins with a proverb from a different African country. This gives the book a feeling of authenticity.

This book has larger themes that make it deserving of a wider readership than one might expect at first glance.

One could imagine that Nyamayaro would develop post-traumatic stress from the early life experiences she has. Rather, she shows remarkable resiliency. Her hardships make her ever more determined to reach her goals. Why does she develop an ambition to serve when others might give up hope? This book is a remarkable case study on resiliency.

Nyamayaro puts two concepts together to show how she gets through hardships: inner-strength and opportunity. As she’s lying face down in the dirt starving, she wills herself to move. When she’s faced with rejections for work, she keeps asking. Not giving up is one of the hallmarks of resiliency, of working through hardship instead of succumbing.

Community workers of all sorts will be fortified by Nyamayaro’s compassion and commitment to service. In Zimbabwe’s HIV/AIDs wards with her aunt, Nayamayro learns active compassion. She holds a mother as her baby dies of AIDS, weeping with her in their shared agony. This experience is a blueprint for connection and community building that should be noted and acted upon by others.

There is a message in this book for women and girls. Once Nyamayaro is introduced to an aunt who is a physician, she shares this news with her school friend who aspires to be a nurse. She knows that the friend can become a doctor, but the girl laughs it off. She cannot dream of such things. Nyamayaro shouts to young girls to dream!

Later in life, Nyamayaro begins one of the UN’s largest gender equality movements, HeForShe, to do everything in her power to ensure that other little girls have opportunities to dream and become whatever it is that they want. Girls need not be limited by social norms or traditional roles. Her twist is that men and boys need to play an active role in this movement, to change the way the whole society thinks about gender roles.

Perhaps most important, in this slim memoir there is a plan for creating real and lasting change that can be applied to any number of intractable social ills. Nyamayaro shares about the lack of access to care that so many Africans with HIV/AIDS face, as well as the social stigma and misinformation that surround the disease. This is addressed by bringing together a wide range of stakeholders to generate insight and solutions to a problem.

If there’s a message in this book for those who are addressing the world’s social problems, it’s that working together works.

It is truly phenomenal that Elizabeth Nyamayaro has lived the life that she has. Without support, she would have become just another child who starved to death in a drought. Yet she took the lessons of her grandmother and their Zimbabwean village and applied them both to her own life and difficult social issues. Her dream was to serve, and she reached that goal.

Nyamayaro gives a beautiful example of the powerful messages of heretofore unheard voices. This book demands that we listen.

If you are interested in international development, HIV/AIDS, the United Nations, or women’s roles in development, this book is an obvious choice, and one that will showcase how determination and perseverance are critical to making lasting change.

If you’re a woman, a person of color, an immigrant, someone who has experienced hardship, has a medical issue, or who simply wants to read a story that will both inspire and make you smile, pick up a copy of I Am a Girl from Africa. You likely will not put it down until you’ve read it cover to cover.