I Am a Feminist: Claiming the F-Word in Turbulent Times (Orca Issues) 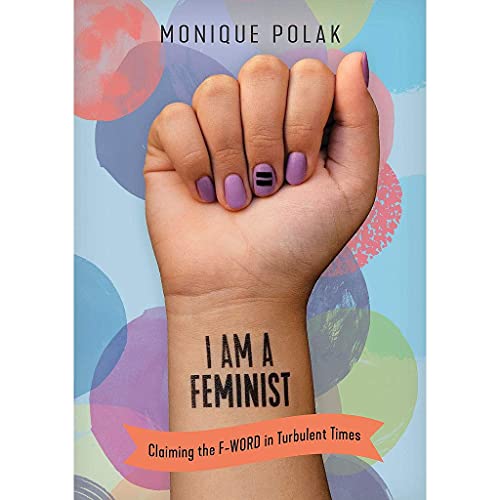 "Homa found another way to record her thoughts. 'I used the tail of my toothbrush to write on the wall. The act of writing helped me memorize my thoughts.'”

"Raise your voice. Claim your space." Monique Polak, a well-known Montreal author, journalist, and teacher, has written a book for young people who aren't sure if they are feminists.

Her book is full of interviews with teenagers and adults, with anecdotes about her own personal life. Polak admits that, at 17, she got involved with an abusive boyfriend that lasted five years. She was afraid to admit anything to her parents and teachers. Instead, she blamed herself for her suffering. "When my boyfriend got angry, he always punched me in my right eye. I got accustomed to applying blue and purple eye shadow to the other eye in the hope that people wouldn't notice." She calls it "intimate partner violence" and urges those who have had the same experience to confront the truth and to terminate the relationship.

Because Polak has the knack of putting others at ease, her interviewees were all willing to speak with her. Her encounter with Homa Hoodfar, a Concordia University Professor, who was imprisoned in Iran for "dabbling in feminism," made Polak both cry and salute Hoodfar's resilience and bravery. Teheran Prison authorities, knowing how much writing meant to Hoodfar, forbade her from using pen and paper. "But Homa found another way to record her thoughts. 'I used the tail of my toothbrush to write on the wall. The act of writing helped me memorize my ideas.'”

Polak profiles Malala Yousafzai, who addressed the United Nations on the importance of education for all women when she won the Nobel Peace Prize.  Malala had earlier written a blog about life under the Taliban in Pakistan. At 15, she was shot at close range and wounded by the Taliban. Malala now asks: "If one man can destroy everything, why can't one girl change it?"

The chapter on the plight of Canada's Indigenous people tugs at the heartstrings. From 1831 to 1996, 150,000 Indigenous children were taken away from their homes and forced into residential schools where they were physically abused and forbidden to speak their own language. Family visiting was forbidden. However, in 2009, Canada established a Truth and Reconciliation Commission to acknowledge the horrible past. Nakuset, executive-director of Montreal's Native Women's Shelter, advises youngsters to be kind to homeless women, say hello, and offer them food.

Social media, especially the #MeToo movement, have enabled women all over the world to identify with feminism. Yet social media have not always been kind to women who have been raped. A Nova Scotia teenager committed suicide when boys in her class raped her and posted the attack on Facebook. Polak tries to sensitize young boys to the feelings of girls who have been abused.

Polak bemoans the sad fact that many young girls don't like their bodies. They see themselves as too fat. Polak herself was self- conscious as a child because she had curly hair when straight hair was in vogue. By way of contrast, boys think their bodies are fine. Polak's advice to all is: "focus on what our bodies can do—how your body digests food, how your heart pumps blood into your lungs . . . how your brain learns new things."

Sexual harassment in the workplace needs special skills to handle it. Many women who have been sexually harassed still fear that they will not be believed. Polak emphasizes that a way a woman dresses should not be used as an excuse for rape.

It is heartwarming today that many prominent men, including Canada's Prime Minister, Justin Trudeau, have become feminists. Nowadays, more men are staying at home to care for the children while their partners work. And more men are teaching elementary school, once considered a dominantly female profession.

Sociologists have created many new expressions to meet the feminist challenge. These include: "amatonormativity," which refers to "society's obsession with romantic, sexual love;" "heteronormativity," a play on words, which sees heterosexuality as a given; and "intersectionality"—how people's experiences of oppression are shaped by their race, class, gender, ethnicity and sexuality. This intersects with human rights.

Colored illustrations by Meags Fitzgerald add to the physical appeal of this book. Polak invites the readers to become activists in changing popular attitudes toward the feminist movement. She provides a list of organizations and websites to which women can turn to for help. Her candid ability to delve into the minds of young adults, engaging style, and conversational tone should spark further discussion without fear of reprisals. This book is also addressed to men and is not anti-male.

Most of the examples are Canadian. But they should strike a chord with American readers too. A must for all young people and teachers.