I Am Behind You 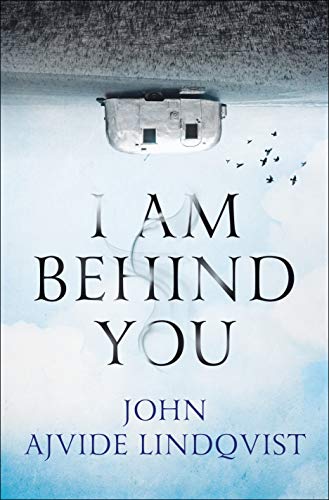 Called “Sweden’s Stephen King” by the Washington Post, Lindqvist offers up this latest work, the first of a projected trilogy. I Am Behind You starts off with four families on holiday waking to discover their caravans no longer sit in the campground where they parked.

The sky is an unbroken blue, with no sign of the actual sun. The land is nothing but green grass as far as the eye can see. As the characters slowly wake, they struggle to understand what their senses tell them. Were they moved in the night? Or did the world around them change?

“It is impossible to know what lies beyond the horizon, under the ground, above the sky, but at the moment it is an empty space. Nothing. Apart from the people. And each person is a world within himself.”

Which may be the point of the entire novel, that we are, for better or worse, alone in the world. With no one else fully aware of what happens inside our hearts and minds. That no one else can see the demons we wrestle with on a daily basis.

The characters are a diverse lot. Two couples with their young children, one older couple vacationing without their grown children, and two men who have turned to each other for comfort after their wives have left. The diversity of familial dynamics creates an interesting character study.

Lindqvist’s characters are the strongest aspect of the novel. He invests each character with a backstory, which he presents through a series of flashbacks and memories. As events unfold in the present, everyone questions if past behavior has led to the current bizarre situation.

As often happens when a group of strangers are thrown together on what is essentially a deserted island, people begin to behave badly. Rather than working toward a solution together, family units dissolve and stranger becomes pitted against stranger as fear and anxiety take hold.

Then the hallucinations arrive.

Or are they? The internal fears and doubts of the characters manifest in corporeal form. From violent fathers, long dead in the real world, to the gnawing hunger of existential angst, the demons arrive to feed on their souls.

“Emil stares at the elephant, struck dumb with terror, because he knows what it is: the most dangerous thing in the whole wide world.”

And the characters show their true colors. From a budding psychopath in the form of a little girl, to a boorish middle-aged man who abuses his wife and his dog, Lindqvist peoples his latest novel with individuals we find little to root for.

Their feelings about each other also come to light. “She hates the caravan and she hates Peter for persuading her to come along. Some of the best memories from his ghastly childhood, camping holidays with his mother, blah blah blah. Isabelle hates his rotten childhood too, and his constant references to it.”

Told from an omniscient point of view, with dips into each character’s thoughts, Lindqvist jumps from head to head. This distancing effect keeps us removed from the characters and makes the reader a voyeur rather than an active participant in events.

This includes the minds of the cat and the dog, perhaps the only characters we feel empathy for. “Benny looks over at the caravan where Cat is still lying in the window. He takes a couple steps towards Cat, but stops, remembering the grip on the scruff of his neck, the flight through the air, the painful landing.”

Even the animals discover sights and smells that confuse them, as they too are impacted by the shifting reality of their new existence.

If readers hope to find an explanation for the bizarre images that appear throughout the story, they will be disappointed. From Jimmy Stewart to elephants, the creatures that arrive might be conjured by the holiday makers themselves. Or perhaps the entire experience is merely one character’s insanity?

Other than a shower of acid rain, the landscape never changes. The apparitions show no evidence of disappearing for good. The characters are slowly eaten by their own disturbing fears.

What it all means will have to wait for the next book in the series. Though perhaps even then, the horizon will simply keep receding into the distance, somewhere beyond the endless sea of grass.