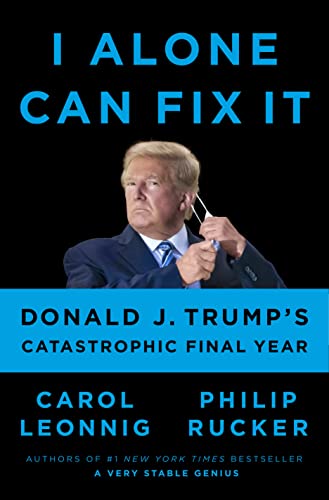 “The authors infer that Trump cared more about himself than the country. Their meticulous history of his last year in office certainly supports that view. . . . an essential read for anyone seriously concerned with the fate of democracy in the United States.”

How deeply can self-seeking authoritarianism penetrate American politics and society? What structures and personalities still function to keep alive what The Economist calls a “flawed democracy”? This book, the second on the Trump White House by two Pulitzer Prize-winning reporters for the Washington Post, provides a trove of facts to answer such questions,

The broad contours of Trump’s behavior in 2020 have been known from multiple sources. For backup, nearly every page in this book cites two or three newspaper and magazine articles. To provide depth and insight, Leonnig and Rucker give details gained from interviews with more than 140 former officials and others close to the Trump administration, including a more than two-hour meeting with Trump himself. Details of that interview occupy ten pages in the book’s epilogue in which Trump claims the Capitol police hugged and kissed the January 6 rioters and managed to insult his long-term sycophants Mike Pence, Bill Barr, Mitch McConnell, and Brett Kavanaugh.

The most riveting details come from former Defense Secretary Mark Esper and (still) Chief of the General Staff, Mark Milley. Both men made public statements that they regretted participating in the president’s walk across Lafayette Square in June 2020. Each said he did not know the event would become a photo-op for political purposes. For the next seven months they maneuvered to prevent the president from using the military to boost his election campaign (e.g., by attacking Iran) and, after losing the election, from staging a coup d’état. Milley’s confidences recorded by Leonnig and Rucker go far beyond anything he said in public. Some observers may feel, however, that—doing so—he does intrude the military into politics.

Some chapters deal with less well-known topics such as the turmoil within the staff of Vice President Mike Pence when he headed the team assigned to deal with Covid-19. Pence, hoping to succeed Trump in 2024, was more concerned with the political challenges of the pandemic than with obtaining and disseminating the best medical science.

Apart from grand politics, this book reveals how the incompetence of the Trump administration undermined even its more constructive policies. Hoping to win popular support even after the election, in late November 2020 the Trump administration sought to implement an executive order requiring pharmaceutical companies to charge the US government the lowest price they offer to any other country for prescription drugs. Hurrying to achieve a PR victory, the White House skipped over some rule-making steps usually required to make such a major change.  The executive order was set to take effect on January 1, 2021, but  a federal judge in Maryland ruled it had been was rushed unlawfully, giving the public no chance to weigh in.

The authors conclude that “Trump almost certainly would have achieved more had he governed effectively and nurtured a professional and productive work culture. Instead, he allowed his White House to become a nest of vipers, with senior officials often advancing their personal agendas and vendettas instead of a collective mission.” A senior White House official recalled, “People were deeply cruel o each other.”

The authors infer that Trump cared more about himself than the country. Their meticulous history of his last year in office certainly supports that view. Their book may be somewhat hefty for the casual reader, but it is an essential read for anyone seriously concerned with the fate of democracy in the United States. The book belongs in every library seeking to record the major forces and personalities shaping the 21st century.