I Almost Forgot About You: A Novel 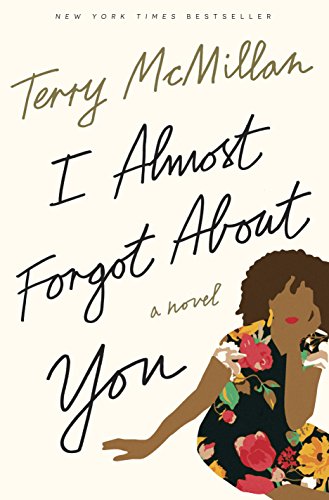 Is there point at which success makes change impossible? Terry McMillan’s latest release, I Almost Forgot About You, attempts to answer that question, with mixed results.

With a thriving optometric practice, a beautiful home in San Francisco, two lovely, independent daughters, and lifelong friends, Dr. Georgia Young’s life seems like a fairy tale. It’s only in matters of the heart that Georgia has faced disappointment.

The revelation that a former lover has passed away leaves Georgia stunned. At 54 and twice divorced, she reflects on all the men she’s loved before and wonders if she impacted any of those men’s lives as much as they did her own. With the help of her best friends from college, Wanda and Violet, Georgia compiles a list and hits Facebook. The resulting conversations and contacts are by turns funny, ironic, and revealing.

McMillan’s bread and butter has been stories of successful, self-confident women, and I Almost Forgot About You is no exception. She has an easy, conversational writing style that makes her stories and characters linger in the mind, much like old friends that the reader had somehow forgotten for a moment. In I Almost Forgot About You, McMillan continues in the vein of her massive hits like Waiting to Exhale and How Stella Got Her Groove Back, creating female characters with self-respect, strength, and a sense of humor.

Georgia Young is a refreshing alternative to modern publishing’s penchant for creating dispirited or even tragic “older” women. Raised in an upper middle class household, Georgia’s life has been one of steady, if safe, achievement. Through conversations and inner monologue it is revealed that she graduated high school two years early, breezed through a series of challenging university courses, and has consistently done well for herself. Her romantic life has been the trickiest bit, but even then she has not been left devastated (or at least not for long).

At the point of her life depicted in the novel, Georgia discovers a sense of gratitude for blessings in her personal life while struggling with a feeling that her professional life is flat. McMillan has explored themes like these in her earlier novels, but this time it’s with an older woman’s personal knowledge and experiences behind her. The voice she gives Georgia and her friends is authentic; their conversations are funny and genuine, full of small wisdoms that will have her contemporary readers nodding in understanding. One small niggle was her use of BFF to describe her friendships. It feels off, a term for teenagers rather than a mature woman.

Georgia’s exploration of her past romantic life is humorous and filled with earthy observations about her past lovers’ attitudes and sexual prowess. Wanda’s game of sexual Jeopardy, where she goes down Georgia’s list of past lovers and challenges her to “describe him in one word—but no more than three or four—and just tell [me] why he struck out,” is very funny and revealing (and will likely have some readers cringing in self-recognition).

Most bits with the lovers are humorous, but McMillan never makes Georgia a sexually charged stock character (though she does flirt with that stereotype in Georgia’s friend, Violet). Georgia’s reflections on the lost loves that truly affected her are lyrical, almost poetic, especially her thoughts on Michael, her first husband: “This is what he gave me . . . This is what we did . . . This is what he taught me . . . This is how he loved me . . . This is how he [stopped] . . .” each header part of a list of loss almost too difficult to read. When she ends the scene with, “Oh, I forgot. He said he was sorry,” Georgia’s heartbreak is palpable, and one could weep. Her thoughts on a particularly beloved ex, Abraham, are similarly affecting.

Though the focus in this novel is definitely on Georgia’s romantic life, her feelings of disappointment in her professional life will likely resonate with readers of a contemporary age. Georgia struggles with the idea that she doesn’t have the “right” to complain, that by doing so she is taking her success for granted. She chose a safe profession, well within the wheelhouse of her abilities; with her children grown and her financial future secure, she is flirting with the desire to embrace her long-suppressed artistic side. Side stories about that pursuit and the attempted sale of her home are less successful than the novel as a whole; McMillan’s treatment of those items feels perfunctory.

As always, McMillan fills out her story with a colorful array of characters. Georgia’s mother is the clear winner—she steals every page on which she appears. Other characters, no matter how small, are similarly lifelike and engaging.

Pacing is the main problem in this novel. I Almost Forgot About You often feels like a series of loosely linked anecdotes rather than a cohesive novel. Big events happen “off-screen,” only related to the reader through Georgia’s conversations with her friends. In denying the reader of Georgia’s immediate reactions, McMillan creates an unfortunate emotional distance between reader and character.

Time is another victim of the episodic manner in which McMillan chooses to tell Georgia’s story. Though Georgia’s house is up for sale throughout most of the novel, and a 45-day sale window even delineated, months go by between mentions of that storyline. At one point, Georgia attends her 40th high school reunion, then has a 55th birthday party just a couple of chapters later. She graduated high school at 14? Even with the information that she graduated “two years early” that seems unlikely.

Most problematic is the sudden appearance near the end of the book and ultimate importance of a character barely mentioned in the early chapters. With so little time devoted to establishing the character’s importance in Georgia’s life, the impact of his appearance is blunted; in fact, it would not be out of the realm of possibility that many readers will call foul on the development. Though perhaps it is related to the title of the book, the reveal falls flat. It looks like a stunt, particularly in light of the way that McMillan’s meandering tale suddenly teems with increasingly unbelievable events and action in the last hundred pages.

Though I Almost Forgot About You falters at the end, Terry McMillan’s latest story is warm and funny, touching in unpredictable chapters, and filled with McMillan’s signature snappy dialogue and salty inner monologue. Read the book for the first three quarters, and forgive the last, because Georgia is such a likeable protagonist.