I’ve Had It Up to Here with Teenagers 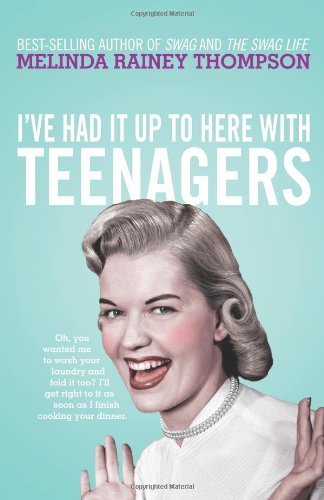 “Ms. Thompson focuses her keen eye, sharp pen, and exasperated sense of humor on the familiar, everyday madness of raising teenagers. . . . Ms. Thompson clearly penned these essays to amuse, kvetch, and commiserate with her compatriots in the mother-trenches, but if the wit of her children is any gauge, there may be some true magic to this Mean Mama thing.”

In this collection of amusing personal essays, Melinda Rainey Thompson finds plenty of material for humor in the home-front battles she fights with her three teenage children. Frazzled and beleaguered, she lovingly plays the tyrant in the hopes of maturing these kids—“self-absorbed, unpredictable and prone to tantrums and petty behavior”—into educated, responsible adults.

Ms. Thompson is an unapologetic, self-proclaimed Mean Mama. “I firmly believe that a healthy dose of fear is a good thing. . . . Guilt and fear have been used by countless generations of mothers to successfully parent their children.” In self- defense, she puts forth her own kids, who have turned out rather nicely. She concedes that their success may partly be due to good genetic material and a stable, happy home. But mostly it’s because they have a mother with “a dab of mean and nasty, like the Grinch.”

That dab is no more than a grain of salt: Ms. Thompson is no Tiger Mom of recent fame, hovering over her children during violin lessons or enforcing draconian punishments for small failures. The Grinch emerges in multiple ways in these essays, but only once does it invoke a wince: When she dressed her daughter for church on Easter Sunday into a “hand-sewn, French-smocked dress with exquisite lace that took three months for nuns in a Greek convent to make”—and then refused to allow the child to wear the red sparkly Dorothy shoes the three-year-old was obsessed with.

The Dorothy shoes incident is a distinctly “southern” one, and illustrates the thick-as-grits regional slant in these essays. This author of SWAG: Southern Woman Aging Gracefully and The SWAG Life insists on the constant use of “Ma’am.” When her teens state their plans with their friends as intent, she forces them to rephrase their statement in the form of a question, a semantic sign of respect.

She’s an old-fashioned kind of mother, the kind who expects thank-you texts to be followed up with properly penned snail-mail follow ups. Even the last chapter on dating seems taken out of the bedroom rulebook of 1950s TV programming: Its tenets include keeping the light on and everyone’s feet on the floor.

Perhaps form is what really matters, when tats and piercings, weed and sex, alcohol and failing academics aren’t obviously in the mix. Her children do seem to have turned out well . . . or maybe she just pulled her punches because those kids are looking over her shoulder, as evidenced by a rebuttal at the end of the book written by her oldest son.

As a result, Ms. Thompson focuses her keen eye, sharp pen, and exasperated sense of humor on the more familiar, everyday madness of raising teenagers: The struggle with their messy rooms, their overweening sense of monetary privilege, the senselessness of clean laundry left folded on the bed, and the terrors of teaching them how to drive. These are the troubles of the well loved, of the middle class, of a mom who doth protest too much—though quite wittily.

Ms. Thompson clearly penned these essays to amuse, kvetch, and commiserate with her compatriots in the mother-trenches, but if the wit of her children is any gauge, there may be some true magic to this Mean Mama thing.

In an argument about a curfew, Ms. Thompson tells one of her sons “If I didn’t love you so much . . . I sure wouldn’t be staying up until one o’clock in the morning!” Her son flashes a smile (“which cost me five thousand dollars”) and responds, “Could you love me a little less on Friday night?”