I’m Trying to Reach You 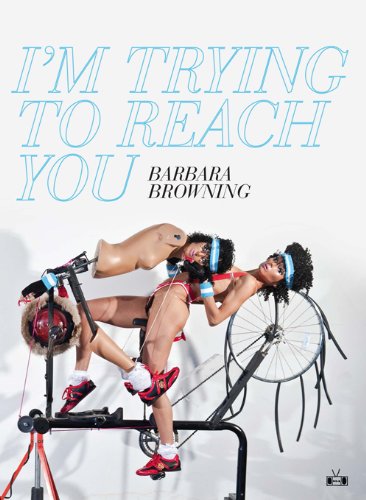 “. . . recommended to anyone . . . who wants to experience a multimedia novel blurring genres and means of communication as well as the boundary between the author and her fictional narrative.”

Barbara Browning’s new novel I’m Trying to Reach You explores psychological themes of identity, obsession, paranoia, the boundaries between life and fiction, between writing and performance, and ultimately the elements that make life meaningful and fulfilling. Her readers will recognize some of these themes from her earlier work.

In her previous novel, The Correspondence Artist, Ms. Browning’s first-person narrator and protagonist is a writer who creates a variety of fictional characters who stand in for and shield both the identity and the gender of her long-distance paramour with whom she corresponds by email.

In I’m Trying to Reach You the first person narrator/protagonist Gray Adams is also in a long-distance relationship but his Swedish same-sex partner Sven is not hidden or mysterious. Terse text messages have replaced the previous novel’s emails as the medium of correspondence.

Like Ms. Browning, Gray Adams is a native of Wisconsin and a middle-aged former professional dancer turned academic. He is a post-doctoral fellow in the Department of Performance Studies at New York University’s Tisch School of the Arts, the very department and university where Ms. Browning is a professor and has served as department chair.

The novel opens in Zagreb, Croatia, in July 2009 where Adams is to present a paper to a conference of an international Performance Studies professional association when a text message from Sven informs him that Michael Jackson has died. That evening he sits at a computer in the lobby of his hotel and watches Michael Jackson videos on YouTube including videos by Michael Jackson impersonators.

Of the latter, Adams, who is African American, remarks, “White people can be so unselfconscious. It’s offensive, charming, and pathetic all at the same time.”

Among these videos is one set to Eric Satie’s fifth “Gnossienne” in which a woman (our author Ms. Browning) “in a black leotard, her hair pulled back, was dancing a subdued dance in an interior space—her living room?”

While watching that video Adams notices that over his shoulder a man who resembles the late actor Jimmy Stewart, holding a miniature tennis racquet, is also watching the video at a distance, invading Adams’ personal space. Miffed, Adams closes his browser and turns around to see the Jimmy Stewart lookalike leaving the hotel and holding the racquet as if it were a weapon.

Ms. Browning’s YouTube dance videos (which readers can find under her user name AhNethermostFun) and fictional comments under each one (a month prior to the book’s publication date no comments are found on the actual videos) become one of Adams’ obsessions.

These videos constitute an integral element of the novel and deserve a review of their own. Suffice to say that the range of her talent is impressive; she is a fine dancer, and also wrote lyrics to one of Satie’s “Gnossiennes.” It would be great if the videos could be embedded in an electronic version of the book (this review is of the paperback edition), but most e-readers still lack that capability.

Over the next year AhNethermostFun posts a total of 12 such videos at irregular intervals in which the dance is accompanied by a variety of instruments including quiet toy piano, ukulele, and loud psychedelic electric guitar. In the novel two YouTube users post comments on the videos: one is critical, at times menacing, and a conservative John Wayne admirer; the other is supportive and liberal.

Adams infers that the former commenter is the ukulele player in one of the videos, an older gentleman resembling from the rear the Jimmy Stewart look-alike who keeps appearing in places Adams frequents such as the NYU gym and faculty dining room.

The deaths of creative genii one after another in a matter of months become another of Adams’ obsessions. After Michael Jackson the next to die is German ballet choreographer Pina Bausch, followed by American modern dance choreographer Merce Cunningham, and then guitarist and electric guitar inventor Les Paul.

Adams harbors suspicions that he acknowledges as “paranoid delusions” that these deaths have been the result of foul play, perhaps at the hand of the Jimmy Stewart lookalike, despite Cunningham’s and Paul’s advanced years at the time of their deaths.

Adams doesn’t share these obsessive anxieties, which readers may suspect are symptoms of too much free time with Sven or his handful of friends. Adams is supposed to be revising his doctoral dissertation into a book, but only manages to move a few commas around; has to deliver a talk once each semester the writing of which he procrastinates; has a notion to write a novel (more or less the book we are reading); and applies for tenure-track teaching jobs at universities for the academic year following his fellowship.

He attends the live performances that are the subject of his academic field, photographs things that draw his attention which he shares with Sven (and with which Ms. Browning illustrates the novel along with still images from her YouTube videos), and is caring and supportive to friends in need as well as to an elderly neighbor who speaks in a funny exaggerated New York accent.

Ms. Browning captures the daily details of Adams’ life, and he is pleasant, intelligent, and engaging company for the book’s 200 pages.

I’m Trying to Reach You is recommended to anyone in academia, anyone who has experienced the uncertainty of a transitional period while changing careers, and anyone who wants to experience a multimedia novel blurring genres and means of communication—as well as the boundary between the author and her fictional narrative.

The techno-ambivalent and literary purists will want to take a pass.