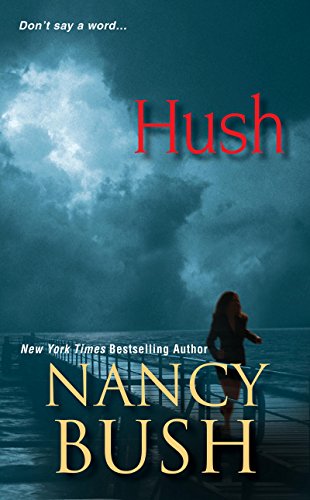 “. . . as a study in the interactions of a large group of long-time friends, it offers insight and intrigue.”

Nine years ago, a teenaged boy—the cute blonde surfer all the girls had a crush on—plunged off a cliff to his death. Although it was ruled an accident, the death has haunted the group of high-school friends who were with him at a bonfire on the beach that night.

As Hush opens, a party, a reunion of sorts, draws many of them back together, and they discover that old secrets and resentments still swirl among them. Hush tells both stories: the vaguely remembered night that began a chain of murders and the present day when the killer adds to the body count.

Coby Rendell’s father was responsible for organizing the original gathering, and it is his invitation to a birthday party for his new wife that brings the group together again. Coby was part of the infamous game of Pass the Candle at the bonfire that night twelve years ago, where each girl was required to reveal something no one else knew about her. Although Coby’s revelation was a lie, she finds herself wondering which of the other girls’ secrets were true and which weren’t, a question which becomes more and more important as the death toll climbs.

Danner Lockwood, the man Coby has had a crush on for years, has grown up to become a police detective. She reconnects with him at the birthday party where another member of the group dies. They team up to try to find the murderer. They also rekindle the old flame that flares more brightly now that they are adults. The relationship between Coby and Danner provides a restful counterpoint to the profusion of story threads. They make an attractive, straightforward couple with some real chemistry between them.

Hush challenges the reader to keep track of an enormous cast of characters with a complex array of secret relationships. One set of sisters—who are crucial to the plot—is known as the “Ettes”—Annette, Nicholette, Yvette, etc.—a clever touch but one that makes it even more difficult to remember which secret belongs to which character. While Coby is meant to be the anchoring point of, her memory of the fateful night is clouded by the alcohol she had consumed at the bonfire, so even her narrative is suspect.

In addition, there are numerous secrets, some true, some fabricated. Some are significant, such as who the father of Yvette’s son is. Others, including who was really the dead surfer boy’s girlfriend all those years ago, seem like the stuff of high-school gossip. Too often by the time a secret has been confirmed or disproved, the story has moved on and the revelation has become almost irrelevant.

Despite multiple deaths, the book is surprisingly static. The characters spend most of their time talking or dealing with food in some way, whether at home, at a party, or en route to a party. The suspense lies more in waiting for something of significance to occur, rather than in holding one’s breath as events unfold at breathtaking speed. Occasional shifts into a different character’s point of view, including that of the killer, occur somewhat randomly and without a clear relationship to the main thread of the mystery.

Perhaps the strongest point of the book is Ms. Bush’s ability to portray the shifting currents of emotion among a large of group of characters, both as teenagers and as adults. Hush illustrates the truth that people tend to regress to the roles and resentments of their younger years when they are thrown back into the same context. The story is at its most compelling when the now grown-up friends recall their old feelings about each other and examine how they’ve changed—or not—over the years.

As a thriller, Hush is not as gripping as one might wish; however, as a study in the interactions of a large group of long-time friends, it offers insight and intrigue.