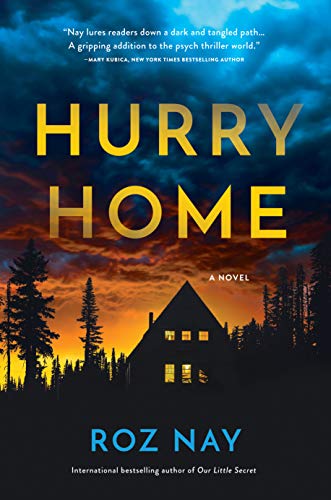 Novels about sibling rivalry, usually between sisters, seem to be a “thing” now, and this particular entry does little to distinguish itself from its peers. That’s its biggest problem.

Alex is a social worker for Child Protection services in Colorado, several hundred miles west of where she grew up. She sees herself as the main protector of children with at-risk parents, especially since she views Minerva Cummins, her co-worker, as a gullible enabler who doesn’t do her job conscientiously enough. She has complained to Morris Arbuthnot, their supervisor, but Morris hates confrontation.

Alex lives with Chase Kennedy, who does promotion for ski resorts and is the handsome face on many of their ads, but has always been blessed with money and good looks so his life has been easy. In fact, he comes across as so bland and vapid that it’s hard to understand what Alex sees in him. Maybe it’s that she can steamroll him.

Ruth, Alex’s older sister, tracks the couple down and knocks on their door. She and Alex have not seen each other in a decade, she has been in and out of trouble with the law, and now she’s pregnant. She tells Alex she has kicked drugs and needs a place to hide from her “dangerous” companion, Eli Beck, who has a record of violence. Alex is reluctant, but Chase invites Ruth into their home.

That’s before they know that Ruth has stolen several bags of cocaine and $12,000 from Beck to finance her new life.

Ruth and Alex narrate alternate chapters and neither is reliable, so the reader needs to sort out who is the more truthful. They offer conflicting versions of several events, and the revelations and plot turns in the story are exactly where editors want them, many logical and conventional, which is a weakness. The book becomes more a textbook in plotting than a novel, and eventually its impact sags under the weight of its predictable twists.

Ruth and Alex have never talked about the death of their younger brother “Pim,” who fell into a grain truck and suffocated while the three children played “Hurry Home,” their own personal variation of hide and seek in which one has to rescue a special clothespin and get it back to the home safe spot. Ruth has carried that clothespin around ever since the little boy’s death. She has borne the burden of her parents’ blame for most of her life.

Alex has never mentioned her brother to Chase. She has also never previously mentioned Ruth’s abortion at 15. She resents Chase’s sympathy for Ruth and spends more time at work defending little Buster Floyd from the parents she sees as dangerous drug users. When she and Morris find cocaine in the child’s room, her fears seem confirmed.

She talks with Sully, her police officer confidant, and becomes closer to him as Ruth draws Chase into her own sphere.

Sully conducts an illegal search for Eli Beck, Ruth’s pursuer, and learns that he’s tracked Ruth to the area. He wants his drugs and cash, but when Ruth goes to her hiding place, they are no longer there. Beck confronts Alex about the problem, and she stabs him in self-defense. She never reports the incident to the police, but turns to Sully and has a brief fling with him as Chase seems to become even more invisible than he was before.

Most of the characters in this novel are little more than set dressing. Minerva is simply indignant and easygoing. Morris fears confrontation and constantly adjusts his tie. Sully has an old dog named Gravy. Chase might as well be a Golden Retriever. Even Alex and Ruth are defined more by their lies and changing stories than they are by their pathology. We can analyze both once we know the truth about their early history, but it takes most of the novel to sort out who really caused Pim’s death, who had an abortion, who had the problems with the law, and who is the worse liar as an adult.

The novel covers several months, but how Ruth worms her way deeper into Chase’s affections and displaces Alex never gets much explanation or display. Everything sorts out to something like justice at the end, but most of it is predictable, and some twists are set up more effectively than others.

There’s nothing really “wrong” with the book, but it may not stand clearly in a reader’s memory for more than a month or two.