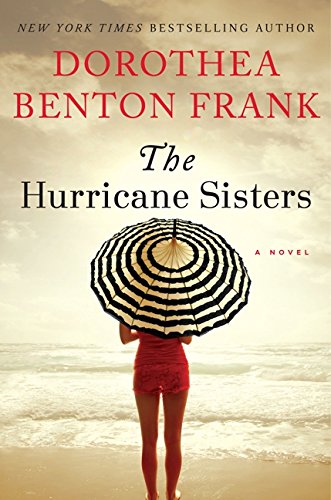 “Dorothea Benton Frank tells it like it is. She brings out the complexity in every character. Though they face disillusionment and heartache, they also display an optimistic and humorous side, making them more human.”

Once again we are in the hot and steamy Low Country of South Carolina and are now presented with three generations of strong and determined women. Eighty-year-old Maisie Pringle is the matriarch who rules the roost, always having the last say, whether it's right or wrong.

Middle-aged daughter Liz Walker, a fierce opponent against domestic violence, works tirelessly on this agenda looking to fill the empty days while her husband Clayton travels to New York every week for his job.

Twenty-three-year-old Ashley is desperately trying to make her way in the art world as a painter, much to her parents' chagrin. She lives with her best friend in the family's beach house on Sullivans Island.

This dysfunctional family spans the generations, each woman along with Clayton telling their own story in the first person.

Maisie has taken up with Skipper, the man Liz and Clayton hired to chauffeur her around, considering she is too old and too "senile" to drive herself. Although Skipper is 15 years younger than she, she flaunts their affair and is having the time of her life, which only embarrasses Liz.

Liz is constantly offended by Maisie's continual reminders of her dead sister Juliet, and as often as she tries to get into her mother's good graces, she determines she will never be loved as much as Juliet. Add to that her suspicion that Clayton is being unfaithful, and trying to accept that her son Ivy is gay, she buries herself in her work to assuage her unhappiness.

Ashley wants nothing more than to be recognized for her talent as an artist, something her parents do not believe is a worthy occupation. And although Ashley and her friend Mary Beth are subsiding on meager incomes, they start an enterprise to make money, which leads them to dire circumstances.

When Ashley meets and begins dating Senator Porter Galloway, everyone is concerned. Porter is well known for being brash and offensive, using women then tossing them aside, but Ashley is in blindly in love to the point where she allows him to dictate her outfits and way she lives her life.

Clayton leaves New York to return to Charleston, repentant and begging Liz’s forgiveness for his misdeeds, though she refuses to allow him in the house. He turns to Maisie then goes to the island to Ashley, hoping she will be an ally and help him get Liz to see him. Porter arrives to take Ashley to dinner, and upon their return, Clayton is gone.

A hurricane is headed to the area, so Mary Beth leaves the cottage to go into town to stay with Liz. Waiting for Ashley to arrive, she suddenly fears for her. The unspeakable happens, resulting in them rallying round Ashley, bringing a new closeness and acceptance they all need.

The Low Country with some of its fascinating history is interspersed amid family trials and tribulations, offering color and giving the tale more authenticity of its residents and their way of life.

Dorothea Benton Frank tells it like it is. She brings out the complexity in every character. Though they face disillusionment and heartache, they also display an optimistic and humorous side, making them more human. Plagued by instability, unwilling to show their deepest emotions for fear of rejection, they are yet bound to one another. Through the turmoil, they accept differences to connect and build new and closer relationships.