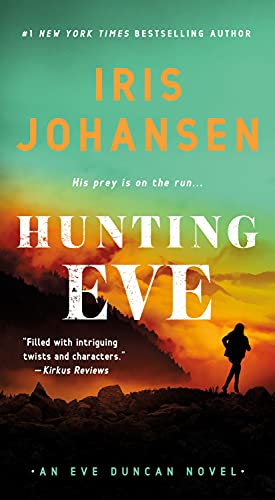 “Hunting Eve contains those elements of familiar characters and suspenseful situations fans of the series have come to expect.”

Eve Duncan has escaped her abductor. Jim Doane, father of serial killer Kevin Doane, who has kidnapped Eve, forcing her to make a forensic sculpture using his deceased son’s partially cremated skull. Eve had complied, then tossed the skull down a ravine and while Doane was distracted, escaped.

“While Eve had been Doane’s prisoner after he kidnapped her, she had begun to wonder whether it was father or son who had been the true monster.”

Now she’s alone on a Colorado mountain in winter, facing not only a killer but also the threat of hyperthermia.

“She could still hear nothing but the flap of an occasional bird’s wings and the wilderness night sounds. . . . This was wild country.”

At Eve’s’ home in Georgia, her lover Joe Quinn is gathering allies to rescue her. One is Kendra Michaels, once-blind, whose other over-developed senses have helped her solve more than one case.

“She had a terrible feeling she wouldn’t be able to help Eve. . . . It was hard for Kendra to understand how the wary, intelligent Eve she had come to know had become a victim.”

There’s also Jane MacGuire, Eve’s adopted daughter, come to help in spite of being dangerously ill, and Margaret Douglas, who claims to have the ability to talk to animals.

“I’ve found it easier to be honest with people if I can. Then they can take me or leave me.”

Also present is CIA Agent Venable, and though he’s not in Georgia, Lee Zander, believed to be Eve’s father, the man hired by General Tarther to kill Kevin Doan. Zander will be there on the mountain, also, but not in a paternal capacity. He’s only interested in Eve as far as the strength of her survival skills, or so he says.

“What was he doing? He deliberately slowed as he realized that his instinct had been to rush that kill just to get to Eve. He’d thought those instincts had died long ago.”

In this one, Eve will be mostly on her own, and getting off the mountain and away from Doane will depend on her wits and how strong her determination to live is.

To readers new to the Eve Duncan series, and perhaps having Hunting Eve as their first foray into her story, there may be a bit of confusion at first. This novel is a gathering of characters who will be familiar to fans. Most of them have already been introduced in other stories in the series, but there naturally has to be a short recap for new readers as each character appears. Throw in the appearance of Jane’s two suitors who are more interested in her choosing between them than the current situation and the story becomes momentarily sidetracked. Thus, a great deal of the first chapters is taken up with brief biographies, plus reminiscences of how Eve met each character and how she changed or influenced their lives as well as the relationships and tensions between them.

Alternating events on Doane’s mountain with what is happening in other locations and back at Eve’s Georgia cottage may also bewilder the new reader slightly because of the various jumps in continuity.

In spite of this, Hunting Eve is a taut thriller, with the cat-and-mouse suspense of an unarmed victim being stalked by a deranged and revenge-motivated killer. Add to that the deadly cold of a Colorado winter and it makes a setting taut with tension. Don’t let the fact that Eve is a woman or that she’s an artist fool you. The lady is tough and getting out of tight situations has been part of her life for quite some time.

A welcome entry in the series, Hunting Eve contains those elements of familiar characters and suspenseful situations fans of the series have come to expect.