Hunting with Eagles: In the Realm of the Mongolian Kazakhs 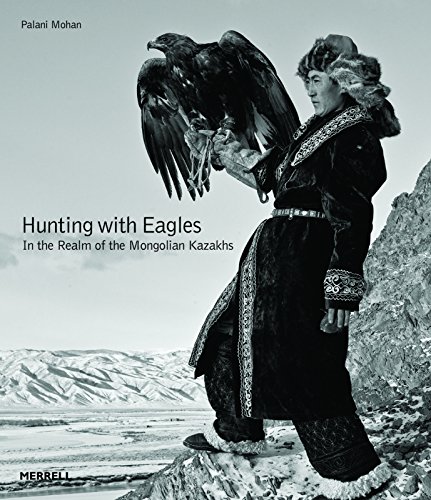 With every passing year, the media sends forth a new wave of apocalyptic predictions. One major theme of these dire warnings is cities becoming more and more crowded, cities agglomerating nearby communities until they transform into mega-cities. All this seems distant in Palani Mohan's new book, Hunting with Eagles: In the Realm of the Mongolian Kazakhs. The book traces a rare hunting method among the Kazakh ethnic minority in Mongolia. For hundreds of years the Altai Mountains have been the home of the Kazakh people and the golden eagles they use for sustenance hunting. It is only the geopolitical borders that have changed around them. Unlike the Mongolians, who are Tibetan Buddhist, the Kazakhs are Sunni Muslim.

During his trips as a globe-trotting photographer, Mr. Mohan befriended Orazkhan Shuinshi. Like the other 100,000 Kazakhs, he lives “in the mountainous Bayan-Ölgii province in the country's far western reaches.” The region's geography can prove challenging to even the hardiest nomadic families. The high altitude region has severe weather, plunging down to negative 20 degrees, along with a sparse population. In the photographs, a lack of trees is evident. The Kazakh keep goats, lamb, and yak for meat and milk. To supplement their diet, they rely on the golden eagle to hunt foxes. After they have consumed the fox meat, they then use the fur for clothing. In this harsh environment, nothing can be wasted.

After Mohan's introductory text, the book has only a handful of explanatory captions. This invites a more personal interpretation of the photography. Mohan presents the photographs in large-scale black and white. The varied subject matter ranges from the abstract to the ordinary. He has formal portraits of the nomad families as well as more candid shots of everyday nomadic life. More abstract photographs include a close-up of a horse's mane blowing in the wind and a shot from the underside of a golden eagle.

The family portraits are reminiscent of John Singer Sargent's portraits of American elites from The First Gilded Age. Any number of these photographs could become a framed picture to be hung above a fireplace.

The beauty of the photography presents a peculiar challenge to this enterprise. Mohan's work is a grandiose representation of a vanishing way of life. But are turning these images into beautiful art-objects threatening the very project he sets out to achieve? Yet at the same time, this becomes an ethnography of the lens—albeit lacking the lengthy textual component of an anthropology book. Still, the large-scale format of the book (11 inches by 10 inches) offers an ability to pick at and dissect the images with the necessary curiosity and compassion. Hunting with Eagles has multiple potential audiences, beyond those with a penchant for anthropology or the more obscure aspects of Central Asian geopolitics.

The large images succeed in detailing Kazakh clothing, hunting techniques, and the trickles of globalization. Even the Kazakh eagle hunters are not immune from the channels of international capital. Nor should they be. Despite their hunting technique rapidly vanishing due to the younger generation's desire to find work in Ulaanbaatar, Mongolia, it doesn't make them into museum pieces or zoo animals. Photographs like these could also have a dehumanizing aspect, turning the Kazakh nomads into foreign art-objects to be adored and condescended to.

Their hunting with eagles and nomadic lifestyle makes them no more authentic than a suburbanite. The Kazakh nomads also show signs of globalization's reach with contemporary footwear or firearms. It should not be forgotten that these nomads were part of the Silk Road, an ancient intercontinental trading route that could easily fit the rubric of globalization.

Mohan's background also exemplifies a globalistic outlook. Born in India, raised in Australia, he lives in Hong Kong. His work for National Geographic and other magazines also make him a nomad of sorts. The Kazakh travel from pasture to pasture, Mohan travels the globe, searching for stories and arresting images. Hunting with Eagles offers a rare glimpse into a vanishing way of life captured by a photojournalist nomad.