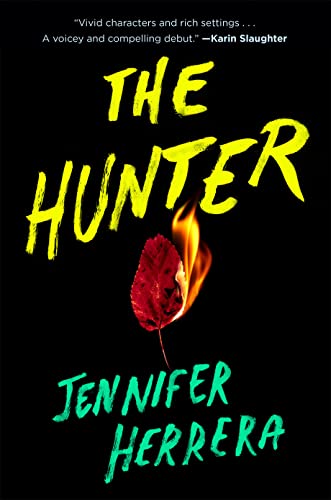 “With its language and momentum, the book propels a reader to the last page.”

For the initial 50 or so pages, The Hunter promises to be several different, intriguing books: a page-turning police procedural written in wonderfully multi-sensual language; an unusual sort of love story; and a probing portrait of the hopelessness, racism, and corruption of a dying small town.

Of course, that’s too much to expect of a debut novel. Author Jennifer Herrera (a literary agent in her day job) largely fulfills the first promise and partially succeeds with the second, but she skims through the third. Even the book’s successes are frequently strangled by too many dangling subplots.

In the main plotline, the narrator, Leigh O’Donnell, has been suspended from her job as a New York City police detective because she inexplicably turned her gun on her partner rather than on a fleeing suspect. The captain who suspended her happens to be her husband, Eric Walker.

Unmoored and depressed, Leigh succumbs to the pleas of her brother, Ronan, who is also a police officer, to return to Copper Falls, the small Ohio town that Leigh had mysteriously fled more than a decade earlier, in order to help him solve what may be a triple murder. However, among the many things Ronan doesn’t tell Leigh is that she’s actually not expected to investigate the three deaths. Instead, she’s supposed to fill her shift doing busywork like “wellness checks” on the gun-toting, angry residents of the town’s poorest neighborhood.

Ignoring Ronan’s warning to follow the rules, Leigh gets drawn deeper and deeper into the tangled trail of the dead bodies. This leads her to mystical Native American traditions, including a shrine to the mythical figure of the Hunter.

Leigh has a super-strong sense of smell, a useful trait that sharpens the book’s descriptions. When she recalls her first non-business conversation with Eric, “I thought to the musk and wool scents of his skin, how just a trace of it could heat the coils inside me.” On the town lake, Leigh’s mother “taught me to enjoy the fish nibbling at my toes and the sinewy webs of algae that could make light spots dark. This was where she’d taught me to listen with my nose: to the dirt, to the trees, to the scents the wind carried like missives.

And Leigh’s passion for Eric is so powerfully conveyed that it’s almost physical on the page. When he is cold to her on the phone, she feels as if “the skin was shaking off me.”

The characters are serviceable, if sometimes clichéd. Leigh hides her needs beneath an exterior of self-sufficiency, while Eric hides his beneath a thick shield of self-control, and their four-year-old daughter, Simone, is adorably astute. The minor characters, including Leigh’s trio of uncles, a fellow policewoman, and the medical examiner, are more colorful.

Unfortunately, many of the subplots not taken seem more interesting than the ones pursued. When Leigh tells Eric that she’s taking Simone, who is biracial, with her to Copper Falls for a short visit, he worries about the racism the girl might encounter. And that’s the last the book has to say about that topic. So why even bring it up?

A lot more is made of Simone’s attachment to her stuffed armadillo, signaling loud and clear that Something Bad will happen to the toy. Yet, after it does, she recovers quickly.

Moreover, two of the subplots hinge on authorial cheating: information that Leigh knew all along, but which Herrera hides from readers until nearly the end.

Still, one-and-a-half promises kept out of three isn’t a bad ratio. With its language and momentum, the book propels a reader to the last page.