Only the Hunted Run: A Sully Carter Novel 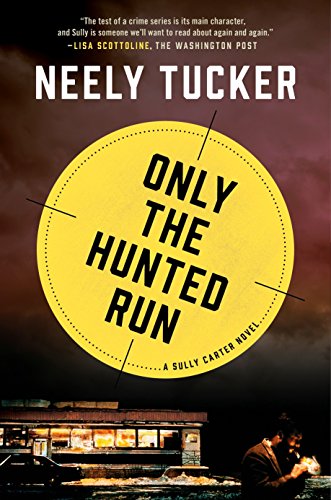 Commanding a spectacular hilltop view of Washington, DC, since 1855, St. Elizabeths Hospital has been both a sanctuary for the mentally ill and a treatment center for the criminally insane. In the early part of last century it was a training ground for Dr. Walter J. Freeman, who in later years pioneered a medical procedure involving slender probes inserted just above the eyeballs to sever a specific set of nerves in the brain.

While veteran newspaper reporter Sully Carter knows a bit about the place, he’s certainly not thinking of it the day gunfire erupts in the U.S. Capitol building— shots he can barely hear due to the screaming, “coming from everywhere . . . bouncing down the marble steps, over the stone floors, around the columns, echoing down the long corridors.”

As hundreds of Capitol Hill staffers run away from the gunshots, Sully races to them, his reporter-brain directing him like a heat-seeking missile toward breaking news. Moments later he encounters the gunman, who has killed and savagely mutilated a member of Congress.

And then he’s off, sucked into a whirlwind of intrigue surrounding the incidents that turned the shooter into a monster. It’s a trail that pulls Sully back to a trauma in his own past, which is well-known to the killer and used as bait to lure the reporter into the malignant heart of this story.

Sully, who describes himself during a tense discussion with an FBI agent as “a mongrelized Anglo from Eastern Louisiana,” easily identifies with interview subjects with diverse ethnicities at every rung of the economic ladder. He knows exactly how to echo the tones of their voices and weave the threads of his own vulnerability into binding connections with people he must listen to very carefully in order to get to the truth.

As a lead character in the series that includes the critically acclaimed The Ways of the Dead and Murder, DC, Sully is everything you want in a journalist and crime investigator. He’s a top reporter at a national newspaper, so his first priority is to get the facts and publish them before the paper’s competitors. He also relishes the mysteries of storytelling, so he’s equally compelled to get every word exactly right.

Although he’s well liked by his colleagues, he speaks without a filter and is almost comically unimpressed by authority, as shown by this scene where he’s is crafting final copy from the dispatches of a dozen other reporters. He’s under unfathomable pressure to meet the deadline, “whisper-cursing at each clunky bit of narrative that refused to be transmitted from mind to fingers to screen,” when the editor who’s been hovering over his shoulder starts to interrupt him one time too many.

At which point Sully stares straight into his computer screen and loudly announces: “I’m taking a swing blade to the next dickless wonder who comes within five fucking feet!”

Which is all it takes for his beloved editor, R. J. to sit back down “without making eye contact, acting like he was straightening the crease in his khakis.”

Within this passage is the subtext of this novel: the deadline-driven news cycle for print media that wasn’t yet on life support in the late 1990s when the story takes place. That subtext further heightens the urgency of everything that happens in the last 50 pages as Sully squares off with the FBI and the hospital’s top brass in his effort to understand the murderer’s true nature.

It is in these last pages that the hospital literally becomes a character in this astoundingly well-written thriller. In scenes that echo the creepiest moments of Dennis Lehane’s Shutter Island, the place pulses with the desperation of forlorn people locked in airless chambers within shouting distance of rooms where brains were excised and studied in the effort to understand what leads men and women to do horrible things.

Examples of such horrible things are vividly described in the story’s climax as Sully encounters one macabre sight after another in the effort to stay alive.

Even then, however, he’s still trying to understand the killer’s psyche and unable to abandon the innate compassion revealed in an earlier chapter where Sully has told FBI agents:

“That’s the problem with victims and perps . . . the line’s so thin. Stop the clock yesterday morning, he’s a sad story. By nightfall, he’s a monster. I don’t buy he made the transition in an afternoon. Grief is a patient bastard. It’ll take its time, twist you into something you never were.”

That’s Sully, calling it like he sees it, even as he stares into the face of a murderous hunter who has no intention of ever running again.