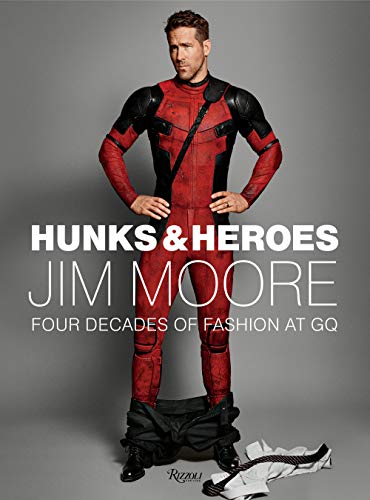 Hunks and Heroes: Jim Moore: The GQ Years is a visual extravaganza of Jim Moore’s resume and his 40 years at Gentlemen’s Quarterly, as it was originally named. Once in the driver’s seat, GQ became a celebrity filled monthly men’s fashion magazine featuring the latest and greatest menswear worn by the “it” men of the moment. Yes, Jim Moore may have led the charge to use celebrities as cover boys, but the formula left behind was nothing short of a juggernaut of menswear magazines.

The monograph is certainly more than just another photo essay on menswear, but it is mostly a catalogue of movie stars, athletes, politicians, and notables—all dressed for the pages of a magazine, with context provided for each image and the authors remarks.

What is striking is that Mr. Moore clearly has a penchant for location shoots; that alone sets his oeuvre apart from so many other print fashion media. Art Cooper had prescience, sensing that it was time for a change at GQ and used Mr. Moore’s visions/concepts/talents as a lightning rod to shake things up.

The images are shot by some of the greatest photographers of the 20th and 21st century and are a testament to each of their visions as well. Each photographer has his or her own iconography, and to Mr. Moore’s credit each was allowed to utilize their own particular visual language.

Kudos to a man who never lost his drive, inspiration, and love of fashion to wither during the ever-changing times.

If there is anything to truly take offense to it would be within the introduction by Jim Nelson, who insinuates in so many words that GQ was on life support in terms of what it stood for. GQ was unquestionably the fashion bible for a generation, not to mention how many long-lived careers it launched. Mr. Nelson’s one small off-handed statement created a somewhat negative mindset for this reader before getting into the meat of the book.

Tip of the hat to Jim Moore and his accomplishments—but one might have thought of a far more suitable title that was not as misleading as the one chosen.