The Hummingbird: A Novel 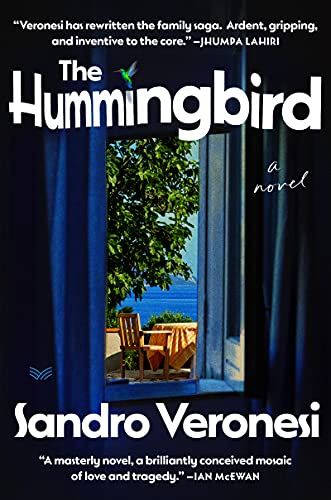 “a tale of love—platonic, familial, romantic—and of forgiveness and growth, along with acceptance of what life doles out.”

Sandro Veronesi is an acclaimed, award-winning Italian writer and literary phenomenon, so it is unlikely he wrote his latest book chronologically, tossed the chapters, letters, and conversations in which he tells his story in the air, and then reassembled them willy nilly. He is too considered a writer, as his literary acknowledgements reveal, to do such a thing. Clearly the structure of his book was well considered. It is certainly unique.

The book is narrated mainly by Marco Carrera, the main character who was so small as a child that his nickname was The Hummingbird. He, and Veronesi, tell the reader about his life, his relationships, his family, his loves and losses, his self-doubt, and sometimes his self-defeating behavior. Along with views of characters’ interactions with each other, Veronesi explores a variety of themes including most universal elements of life and human nature. No character flaw is left unearthed, no disloyalty overlooked, no breach too small to dissect.

Yet it is a tale of love—platonic, familial, romantic—and of forgiveness and growth, along with acceptance of what life doles out. Siblings, lovers, spouses, parents, friends—all play a part in the drama that fuels Marco’s obsessions, reflections, and experiences. At the end of the day, and the story, Marcus grows into a man who loves life, no matter what it challenges him to do to survive.

As translator Elena Pala says in her end note, “reading The Hummingbird is like getting ten books for the price of one. Marco Carrera starts life as a hapless, almost comical, husband . . . but as the story unfolds . . . we get the true measure of a man who . . . just kept going against all odds.” Veronesi, she notes, “often appears to test the limits of how much detail the mind can hold . . . while waiting for the main piece of information to be delivered.”

That makes keeping track of characters and their relationship to each other a bit challenging, but always worthwhile, in large part because of Veronesi’s voice, literary skill, humor, and insight. There is his wife Marina, Irene, his sister, his daughter Adele, Luisa, his erstwhile lover—and most precious of all, his granddaughter Miraijin, who, emotionally speaking, saves his life. And that’s just the women who mean the most to him.  Then there is his brother, his childhood friends, and his wife’s psychiatrist who becomes a friend, too.

To get a sense of Veronesi’s writing, here he is on Marco’s relationship with his longtime friend. “They were best friends when everyone knew [Marco} as The Hummingbird. They started gambling together . . . messing about in casinos all over Europe. . . . Then life got in the way and now they pity each other.” In typical fashion, there’s a lot packed into those words.

And this is Luisa describing Marco’s character in one of her letters: “Marco, this is you. No one can persevere as strenuously as you do, and no one can elude change quite like you do . . . you hold steady and push on to the bitter end while also (fatally) refusing to submit to other people’s rules or decisions . . . . You really are a hummingbird.”

This novel is a family saga like no other. For that reason alone, it is worth reading and wondering what Sandro Veronesi’s next literary work has in store for readers.