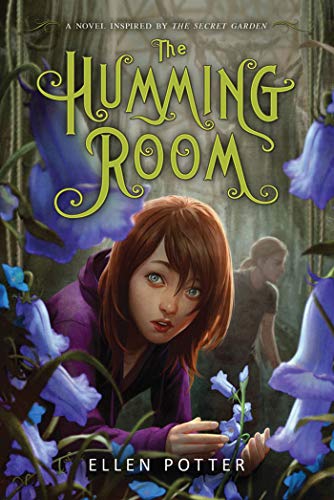 “Resplendent with the vivid hues of its characters’ hopes and sorrows, The Humming Room gives young readers a compelling tale that does justice to its evergreen inspiration.”

Twelve-year-old Roo Fanshaw craves small places, dark spaces, the unlikely spots that escape detection by adults. That predilection saves her life when her parents die in a drug deal gone awry. It has also stunted her growth.

Her crouched days beneath the trailer end when the orphan is shuttled first to a foster family and then to a rich, eccentric uncle she has never met. With a plot that parallels Frances Hodgson Burnett’s classic The Secret Garden, Ms. Potter plants her story on a bleak island called Cough Rock, in the St. Lawrence River in upstate New York. The author conjures an evocative gothic setting that, in its isolation, its associations with death, and its mysteries, becomes a mesmerizing place to watch a troubled protagonist to grow.

The stark landscape mirrors the girl’s state of mind, as both are marred by neglect and grief. Uncle Emmett’s rambling estate was once a tuberculosis sanitarium and the last place some children ever knew.

Soon after she arrives, Roo’s aloof uncle leaves her in the care of his employee Ms. Valentine and warns her the East Wing is off limits. Roo’s new home contains many closed-up rooms, just as she herself has walled off her own tortuous secrets from others. Again and again she hears inexplicable cries in the night. Do they come from the ghosts of those who died there?

Readers will relish the author’s skillful and evocative unraveling of Cough Rock’s mysteries. In the process, they will meet a young heroine who will linger long in their thoughts. Like Mary Lennox in The Secret Garden, Roo gradually sends out tendrils of new growth. Led by her sensitivity to nature—she likes to put her ear to the ground to listen to the sounds of life there—and her curiosity, she will track a tuneless humming she keeps hearing and discover not only a cousin, Phillip, but also a domed garden in a hidden part of the house.

Magic flickers in and out of The Humming Room, especially in its associations with water. Roo encounters a wild boy the natives believe is a kind of fairy. Jack, like Dickon in the classic novel, is wedded to the forces of nature, in this case, to the unpredictable river he haunts. He is the first to assist Roo in restoring the shriveled garden. In time, she decides to share her secret with Phillip, who senses his deceased mother’s presence in the atrium where her native Brazilian plants once flourished. The rejuvenation of that meaningful space ushers in a sense of healing for Roo, Phillip, and, eventually, his mournful father.

Resplendent with the vivid hues of its characters’ hopes and sorrows, The Humming Room gives young readers a compelling tale that does justice to its evergreen inspiration.