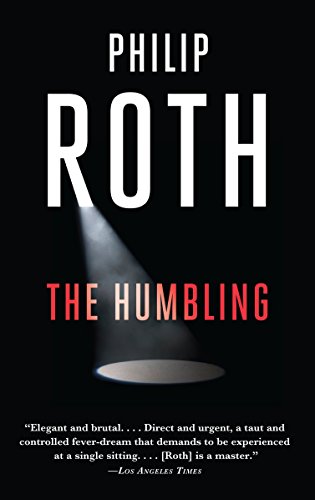 So writes the National Book Award and National Book Critics Circle Award winner, the PEN/ Bellow, PEN/Nabokov, and three-time PEN/Faulkner Award winner, the Pulitzer Prize winner, the recipient of the National Medal of Arts and the American Academy of Arts and Letters’ Gold Medal in Fiction. Philip Roth’s thirtieth book, The Humbling, is thoroughly trite—both its subject and its style—and an insult to the organizations and individuals who have praised and supported his writing in the past.

Roth’s standing in the literary community has allowed him to publish a novel that otherwise would never have gotten by an agent’s intern, much less an editor or a reviewer. His literary fame allows him to virtually print money because readers will buy The Humbling no matter how many reviewers warn them not to. There is no hidden value behind this work of unbacked currency.

Explicitly sexual language is not in itself a demerit in literary fiction, but the heart of this novel is simply badly done and thoroughly uninteresting “pornography” in which, as Nabokov put it, the action is “limited to the copulation of clichés.” Perhaps some readers like to hide behind the literary pretense of a Roth novel to get at the bad pornography they really want. But if this is so, these days a fifteen minute search of Internet adult chat sites will get them more of what they want instantly and at a better price.

The novel concerns a great stage actor’s sudden loss of talent. The first chapter begins with a cliché for a title, “Into Thin Air,” launches into a dead metaphor with the first sentence, “He’d lost his magic . . .” and maintains that prosaic pace for several pages before it finally ventures into a theme of some complexity: the actor’s discovery that even his performance in the role of a depressed person is unconvincing.

The first 19 pages cover this interesting, if thinly expressed, idea. The hero, whose name is Simon Axler, checks into a mental hospital where he garners the fascinating if insane perspectives of inmates whose respect for successful suicides is both alarming and uncomfortably amusing. After page 19, nothing much else of any interest occurs. Instead, one hundred pages of paraphrased dialog and second-hand action drag on, occasionally delivering some “shocking” content, which is so predictable as to be not worth mentioning.

Suffice it to say that Axler has a sordid affair that doesn’t work out. In the last twenty pages of the novel, the slightly more crafted but still solidly prosaic writing that had appeared on the opening pages resumes. The thespian theme finally returns.

Roth achieves a moment of pathos when describing how the aging actor suddenly has the urge to try to recapture his talent, and he dreams of having a baby with his much younger lover, just as she is clearly planning to dump him. When the break-up comes, he does finally regain his talent and successfully acts the part of a suicide, thus resolving, satisfactorily, the question posed by the narrative. Readers will not mind that the end is here given away. This will spare those who might have considered reading on to “see what happens” for they will only be disappointed by the lack of skill applied to this potentially rich subject.

The Humbling takes up shelf space and review space that should have gone to more deserving books. Roth did the absolute minimum amount of work for this novel. Clearly, he believes the formula that as long as the beginning and ending are readable, reviewers will forgive whatever goes on in the middle. Had he cut those 100 or so pages, he would have had a second-rate longish short story, but not one that would, without his name, extract a prize from any literary journal. An author recognized for his literary talent has a certain degree of responsibility to his readers. The writing and the story line of The Humbling are humbling to no one.

Tori Alexander is a novelist who lives in New York and writes on the philosophy of science as Victoria N. Alexander.