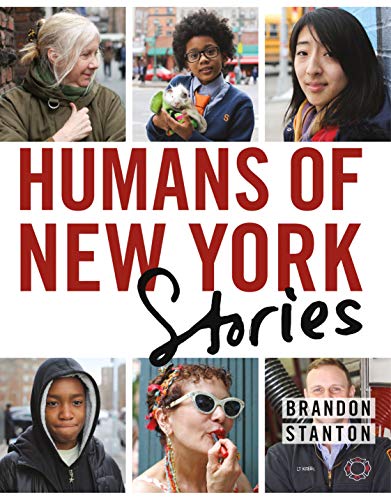 Author and self-professed amateur photographer, Brandon Stanton, has successfully branded humanity in a wildly engaging photoblog that has garnered 15.7 million followers since 2010. Stanton’s first book, Humans of New York, was an acclaimed and exhilarating carnival of portraiture. Stanton’s second book, Humans of New York: Stories, tones down the carnival with more subdued photography that is intended to enhance the moving real life story vignettes which are the nucleus of the volume.

The stories are brief but compelling pieces that bear testament to Mr. Stanton’s gift as a chronicler. His is a natural ability to hone in on a subject and elicit a poignant, authentic response. Stanton’s stories are not the product of lengthy interviews. They flourish from spontaneous encounters. This facility to connect with strangers and quickly establish trust could well be the secret sauce that underlies the impact of the Humans of New York project.

The visuals in Humans of New York: Stories are sometimes raw, always candid and provocative. Each photo echoes the sentiment conveyed in the accompanying story. These images don’t jump off the page. They are intentionally thoughtful, subtle and restrained. Stanton’s clear intention in Humans of New York: Stories is to lead with the story and have the image imbue a quiet strength that builds and shifts from the words to a graphic portrayal of what is written.

Brandon Stanton sees the faces in a crowd. He is fortunate to be able to swim through the sea of humanity and observe individuals. His vision, persistence, and sense of purpose in developing this project is laudable. Humans of New York: Stories’ poignant portrayals are important reminders that we are each part of a common humanity.

One must salute Mr. Stanton for his undying desire to look beyond the crowd and highlight the idiosyncratic. Humans of New York: Stories is an evocative experience that you will want to share, as its message is simply too powerful to keep to oneself.