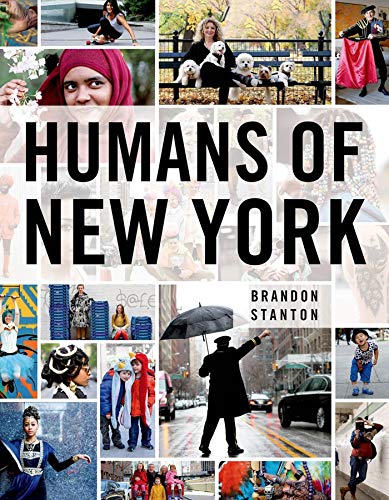 “Brandon Stanton’s Humans of New York is a uniquely exhilarating carnival of portraiture.”

Those residing in or familiar with NYC will turn its pages with a knowing smile as the quirky and singular images portray the extraordinary human melting pot that is New York. Non-New Yorkers will also enjoy this inspired collection of captivating and often moving encounters. Mr. Stanton’s photographs are more than mere portraiture, with each image capturing a delectable slice of the Big Apple. He refers to this collection as a “photographic census of New York City.”

The author obtained his first camera while working as a bond trader at the Chicago Board of Trade and began to develop this hobby as time permitted on weekends.

“Photography felt like a treasure hunt, and even though I sucked at it, I’d occasionally stumble upon a diamond. And that was enough to keep me wanting more.”

As a bond trader, Mr. Stanton took risky positions that ultimately cost him his job. It is our good fortune that he then channeled this displaced energy into photography. In this vocation, he again acts on impulse, but here it is with boundless success.

Humans of New York (HONY) began as a blog in 2010. It took off when a friend convinced him to use social media to develop a large audience, first a Facebook page, then Tumblr. But it was only when HONY evolved to pair photos with text—snippets, stories and quotations—that the fan base ballooned.

“Passionate” and “obsessive” are adjectives Mr. Stanton uses to describe himself. To date he has produced half of the 10,000 photographs that he initially set out to do.

The inherent power of an image to tell a story better than “a thousand” words is often noted. Here the words add mightily to the viewers’ response. Humans of New York reveals and revels in the many facets of New York’s soul. Indeed, it is the pairing of each photograph with brief prose—sometimes whimsical, other times more profound allegory, at times plainly descriptive—that illuminates in small bursts what is uniquely human in New York.

Some text simply relates to geography, “Seen in the subway” or “Seen in the East Village.” These provide context when anything more might detract. Other snippets guide our interpretation by shining a light on a deeper meaning. The viewer recalibrates accordingly and perceives a slice of New York life through Mr. Stanton’s distinct and nimble lens.

An unschooled but acute artistic vision, a determination to capture the people of New York in enlightening moments, and a willingness to embrace possibilities are the force behind Mr. Stanton’s work.

“Normally it’s when I was trying to take a certain picture and something completely unexpected happened that the picture turned out to be 10 times better than I thought it was going to be.”

The physical form of Humans of New York is that of a coffee table volume. But HONY is more than a collection of sumptuous photographs. This work is a gem to be shared and not obfuscated in a crowded bookshelf. Whatever the milieu—coffee table, bathroom, kitchen counter—all who pick up this book will be taken by Brandon Stanton’s captivating photographs of NYC’s urban humanity.