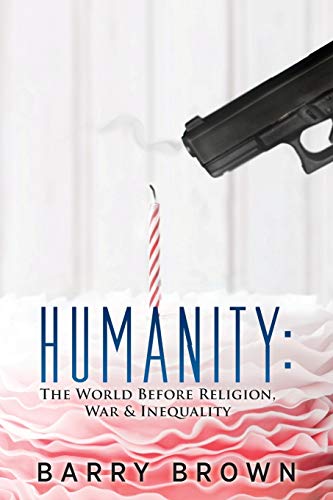 “Barry Brown’s revelatory work shows us a clear path of how to return to our natural, peaceful state of being.”

In this groundbreaking work, author Barry Brown has managed to definitively prove humankind’s natural tendencies to be peaceful, cooperative, and egalitarian. Barry takes the reader on a tour de force through humanity’s prehistory as well as providing detailed evidence for his assertions about mysteries such as ancient artifacts such as Venus statues, the original meaning of the swastika, his theory about the location of the Garden of Eden, and the real purpose of the Gobekli Tepe site, an enigmatic archaeological site in southeast Turkey.

Brown’s background as a journalist is his greatest asset as he manages to make connections that are seemingly overlooked and/or downplayed by the world’s leading archaeologists, paleontologists, historians, and even evolutionary biologists.

One of Brown’s main supporting arguments can be found in a Scientific American essay, which elucidates the nearly completely non-violent behaviors of chimpanzees and bonobos, our closest living ancestors, as well as the early fossil record of hominids, where no group warfare among masses of people is found before the advent of agriculture, cities, and hierarchies.

This indicates that our biological nature is peace-loving, and that our tendency toward group violence has become normalized due to propaganda, socialization, and cultural factors. Although small cases of individual killing did occur in hunter-gatherer societies, these are outliers, not the norm. The first 99 percent of human history was peaceful, without organized warfare.

Brown starts off documenting the evolutionary history of our primate ancestors, exploring the possibility that having a better sense of balance with a more complex inner ear, and the consciousness of having a center of gravity, is what differentiated Homo sapiens from other hominids.

With the tenacity of an investigative journalist, Brown offers unique insights into the mysteries of the ancient world, including: Venus statues were the world’s first book, an object for reflection and to stimulate insight regarding anatomy, culture, psychology, and femininity.

Also, Gobekli Tepe was the world’s first university, as it shows no permanent signs of settlement or religious use, where people from all over the region could come to learn farming techniques, animal husbandry, and share culture. The swastika was a symbol of peace and friendship, a signpost for travelers of welcome and to encourage newcomers that friendly human settlements were nearby.

Barry’s Brown is the first of its kind to look at humanity’s history before and after the advent of warfare. His central argument is that warfare started approximately 4000 BCE in India, which is documented in the epic Mahabharata, of which a small part is documented in the Bhagavad Gita.

Brown also notices a possible correlation in the Old Testament, where it is his interpretation that the Jewish people descended from Eastern India, near the Ganges River, which was the original “Garden of Eden.”

Social divisions were the precursor to war, as the forming proto-caste system in ancient India bred alienation, vertical hierarchies, patriarchy, wealth inequality, and families and clans demanding blind loyalty and obedience from their followers.

Brown’s contention that the war between the rival clans, the Kurus and the Pandavas, was the first war in history, which fractured social relations in India and spread suspicion, fear, and hatred throughout the premodern world. Divisions and hierarchical relations in ancient India were exacerbated to such a point that no person or group dared to challenge to reconcile the two clans.

Elaborate musical and gaming events, clan rivalry, and mass religious rituals most likely were the precursors to the actual war, devolving into war games designed to let off steam and social tensions, which further devolved into actual warfare.

After this first great war, much of advanced Indian society shifted east to the Indus Valley civilization, where a democratic, egalitarian society flourished from about 3000–2000 BCE. However, the dark forces of empire, organized violence, and social hierarchies spread to Mesopotamia and Ancient Egypt, where they eventually gave rise to monotheistic, dogmatic religions, fear, insecurity, and permanent wars.

Brown explains how the wounds of ancient violence, strife, and fear, this turn toward warfare and discord, remain with us to this day. When security is traded for liberty, where “freedom from” hunger, tyranny, and poverty is replaced by a selfish creed of “freedom to” do anything one likes with their time, private property, and money, humanity as a whole suffers.

The roots of global conflict go back to this change in our shared history, a shift from helpful, friendly, cooperative communities to fearful, divided, traumatized nations that now threaten the entire world with the crises of global warming, habitat destruction, and nuclear war, just to name a few.

Barry Brown’s revelatory work shows us a clear path of how to return to our natural, peaceful state of being.