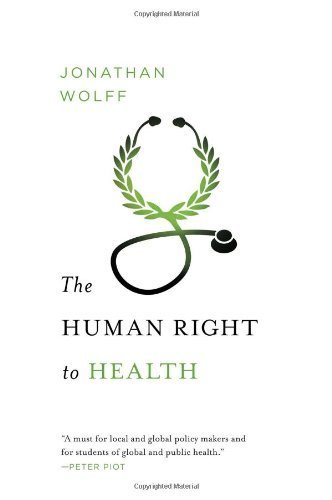 “Make reading The Human Right to Health a priority—if for nothing else than to consider some of the questions around the influence of private foundations and their public accountability regarding the use of global health care resources.”

Health as a human right is not a new element to the tableau of the health care conversation, but Jonathan Wolff’s treatise is ballsy in its unsparing criticisms of both governmental and nongovernmental organizations that have committed substantial resources to improving global health.

Though there continues to be tooth gnashing over the right to health care in the United States, the United Nations passed a resolution in 1948 which acknowledged this right.

Another post World War II child is the World Health Organization, which published its first article in 1947; however, there was no binding component to the right to health resolution until 1976, when it became international law. Mr. Wolff reveals not only that the right to health is not prohibitively expensive but also that some of the roadblocks to improving health worldwide are not insurmountable.

To say that Mr. Wolff is brave is an understatement. He spares no one from criticism, including the Gates Foundation, the United States Government, the World Bank, and the International Monetary Fund.

Another of Mr. Wolff’s observations is that the human rights culture favors those who have access to lawyers—namely the wealthy and well connected—creating a cultural cache of its own.

Mr. Wolff also asserts that when the World Bank and the International Monetary Fund began tying loans to formulas requiring “structural adjustment,” developing countries had no choice but to abandon many health initiatives in order to secure loans. The World Bank often required countries to reduce their public spending on health in order to drive economic growth and to foster competition in delivery of health services. These edicts were made despite the lack of evidence that competition in health care makes those services less expensive or more efficient.

Additionally, the developed world was encouraged to make money in the provision of health care to underdeveloped countries. Though making money is not necessarily bad, it does create certain ethical dilemmas from time to time.

Incorrigible South Africa and Botswana, two of the wealthiest African nations, were both late to the party on HIV education and prevention and did not step up for treatment of this 30-year-old epidemic until 2004. Mr. Wolff’s coverage of the HIV health epidemic illustrates how politics and infrastructure have as much disease impact as any treatment protocol.

In other words, having the goal of one million people under treatment isn't the same as having ten million in the same population being educated and surveyed about disease prevention. The latter process is the least expensive long term modality, but lacking the cache of the “one million served” mentality.

Changing attitudes and policing private behavior is a much more difficult matter. Though the necessity of circumcision has been questioned by health care providers, Mr. Wolff cites a random controlled study showing a statistically significant difference in the reduction of female-to-male transmission of HIV/Aids for circumcised men, thus making it an inexpensive preventive measure.

Mr. Wolff takes on an examination of the international copyrights and patents rules in the Trade Related Aspects of Intellectual Property Rights or TRIPS, which seeks to codify drug prices globally, but does not make medications less expensive. In part to offset this factor, the large pharmaceutical suppliers—which are multinational corporations—do provide low cost drugs for various global health initiatives. One of the only nations not bound by TRIPS is Russia, which has turned out to be a real rogue nation since the dismantling of the Soviet Union.

Many factors impact the success of any health intervention besides cost, including patient compliance, cultural norms, and basic infrastructure. One of the basic issues that Mr. Wolff addresses is the recruitment of doctors globally by developed countries such as the United States and the United Kingdom. As for the “well endowed” foundations, the allure to work with the best people and the best equipment is often greater than the provision of health care and this also encourages a brain drain.

Make reading The Human Right to Health a priority—if for nothing else than to consider some of the questions around the influence of private foundations and their public accountability regarding the use of global health care resources.

As cited at the conclusion of Mr. Wolff’s treatise, for more information on alternative world health reporting, publications from the People’s Health Movement are available.