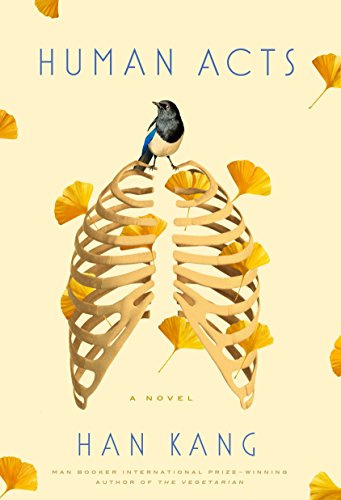 “Deeply engaged in the connection with the physical body and the human soul . . .”

Following in the wake of the tremendous success of The Vegetarian, Han Kang’s latest novel, Human Acts, is a searing novel that explores a brutal part of South Korea’s history.

The novel unfolds amid the 1981 Gwangjo Uprising, violently suppressed by the government of the time. Human Acts, which portrays the stories of those individuals that either survived or perished during the uprising is an unflinching account that many, including some of the novel’s characters, would prefer to forget.

The novel begins with the story of Dong-ho, a 15-year-old schoolboy desperately searching for his friend’s body. Dong-ho quickly becomes entangled with the civil militia and begins looking after the grotesquely mutilated bodies brought into the city’s municipal gym.

From there the novel moves beyond Dong-ho’s story and begins recounting those of the people around him. An editor in the future recounts how she had to hide from soldiers during the time of the uprising, a former prisoner recalls how was tortured during the time of his imprisonment, a factory worker is forced to remember her rape at the hands of soldiers, a mother mourns the son she lost to the uprising, and Han Kang herself reveals the heart rending story that prompted her to write this novel in the first place. Brutal, vivid, and terrifying, Human Acts is as much a questioning of humanity as it is of history.

At its core, Human Acts is a novel of rebellion. Each character, whether they participated in the uprising or not, rebels against what has happened in his or her own way. Where one character rebels by refusing to confront her past, another desires to find and confront his killers.

One character cannot bear the burden of his memories any longer and takes his own life yet his friend, who has been through the same experiences, actively fights against the urge to escape his memories by taking his own life, every single day.

Through the team of rebellion, Han Kang tackles an array of themes and emotions that her characters grapple with; loss, confusion, anger, the will to live, memory, forgetting, forgiveness, endurance, loneliness, entrapment. . . . Each character reacts differently to the pain and suffering they have been made to experience. Yet none is more valid than the next.

Human Acts never once attempts to dilute the unfolding events in poetic prose. Instead each gory event, from massacres to tortures, is described in stark realism, turning the distant past into the vivid present in the eyes of the reader.

Thus, the novel struggles to come to grips with inhuman acts inexplicably perpetrated by human beings and even manages to thrust this struggle onto the reader’s shoulders. As each story is recounted in the second-person narrative, the reader is put into the uncomfortable position of the characters themselves, experiencing every pain and strife that experience. In this way, the reader is forced to try and understand the incomprehensible and confront the inevitable past, even when the novel’s characters are unwilling or unable to do so.

Despite all this, Human Acts never once portrays its characters as victims. In fact, it emphasizes that despite the torments they have suffered through, they must never be thought of as victims, that their memories cannot be desecrated in such a manner. Deeply engaged in the connection with the physical body and the human soul, the novel transforms its characters into something else and seeks to remind them they had “a face and a voice, to collect their own dignity, which seemed a memory of a previous life.”