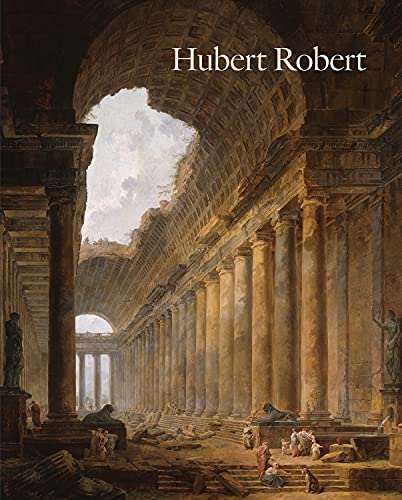 Hubert Robert may be the most famous artist you’ve never heard of.  A-list fans like Louis XVI, Catherine the Great, and Voltaire clamored for his poetic views of architectural ruins. From the late 1770s until the French Revolution, Robert was Keeper of the King’s Pictures and lived under the Louvre’s Grande Galerie.  Imprisoned during the Reign of Terror, the 60 year old narrowly escaped the guillotine and returned to the Louvre, helping turn the royal palace into a national art museum.

Published in connection with the first monographic exhibition of his work at the Louvre and National Gallery of Art, the richly illustrated Hubert Robert reintroduces the artist as much more than a painter of ruins. Five insightful essays highlight Robert’s remarkable scope which includes painting, drawing, interior decoration, and landscape design.

James Baillio explores Robert’s formative decade in Rome where, “swept up in the mania for antiquity,” the 21 year old first experimented with his imaginative landscapes. According to Baillio, Robert’s winning personality and networking skills helped him earn the patronage of wealthy French collectors and the friendship of artists like Panini, Fragonard, and Piranesi. Margaret Morgan Grasselli, head of NGA’s department of Old Master Drawings, sheds fresh light on the artist’s glorious works on paper—“the soul of Robert’s art”—from his beautiful red chalk views to watercolors.

Returning to Paris in 1765, Robert enjoyed an avid following both for his architectural paintings and his interior and landscape designs. As Yuriko Jackall, assistant curator in the NGA’s department of French paintings, describes, Robert designed decorative cycles featuring his ruins and landscapes or French and Russian chateaus and palaces. With projects for Marie Antoinette’s Petit Trianon at Versailles, Méréville, and Ermenonville, Robert helped popularize the French landscape garden, an offshoot of the popular English style garden.

Guillaume Faroult, paintings curator at the Louvre, examines how contemporaries regarded Robert’s spontaneous drawing and painting style with suspicion. Faroult quotes art critic Denis Diderot: “If this artist [Robert] continues to sketch, he will lose the knack of finishing, his head and his hand will become wayward . . .”

Portraitist Élisabeth Vigée Le Brun, who called the artist “the most amiable man one could encounter in society,” also wrote that “Robert possessed that extreme facility that can judged either fortunate or fatal: he painted a picture as quickly as he wrote a letter; but when he chose to master his talents, his works were often perfect.”

The prolific artist died in 1808, just shy of his 75th birthday, with a paintbrush in his hand.

Susan Jaques is the author of The Empress of Art: Catherine the Great and the Transformation of Russia. She is also a member of Historians of Eighteenth Century Art & Architecture and Biographers International as well as a gallery docent at the J. Paul Getty Museum.