How They Blew It: The CEOs and Entrepreneurs Behind Some of the World's Most Catastrophic Business Failures 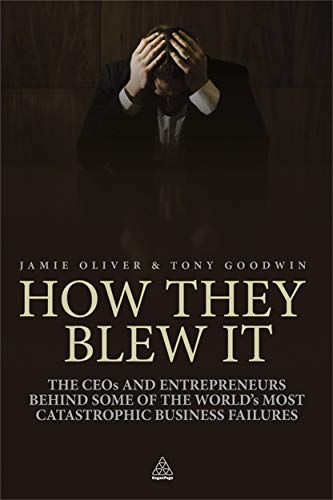 "To err is human,” we are informed by the authors of How They Blew It: The CEOs and Entrepreneurs Behind Some of the World’s Most Catastrophic Business Failures. Then they add, somewhat ambiguously, “But it doesn’t have to be that way.”

The rather odd duality, expressed in that grammatical error, illustrates the strength and the weakness of this collection of stories. The authors are very good at recounting the rise and fall, from a financial point of view, of a series of unhappy entrepreneurs and businesspeople.

If you haven’t followed the stories of Bernard Ebbers or Adolf Merkle, this book provides a detailed and comprehensive recounting of them. These are clearly very successful people, whose very classic “human” failings brought them down.

The authors get into more trouble when they take on figures like Dick Fuld, of Lehman Bros., or former Russian oligarch Boris Berezhovsky. Here, their desire to create tragic-flaw models suffers from the complexity of the context in which these businessmen operated—you cannot reduce the Lehman failure, which involved vast macroeconomic and historic forces, to being a function of Fuld’s self-absorption. Fuld is, for many, not a likeable character, but life is more complicated than that, guys.

However, the story of British entrepreneur, Reuben Singh, is told with verve and superb selection of detail. Singh built a retail empire in a few years, then blew it all on bad deals and wound up bankrupt. Singh claimed he did not want to be “too visible,” so he drove a canary-yellow Bentley. Singh declares that “he’ll never deceive anyone,” but then is found out as having lied to a bank to obtain a loan. The portrait of Singh is really instructive about someone who succeeds too fast, and then flounders.

What really hurts the book is its unpleasantly snide and pedantic tone. The style, a mixture of BusinessWeek and Boys’ Life, falls too often into self-parody. Of Singh, for example, we are told: “It is part of the personality of entrepreneurs to want to show the world what they are made of. Psychologists might argue that this self-justification, or self-glorification, is part of an inner insecurity and inferiority complex. Others would say it is simply part of having a very big ego.”

One could scarcely imagine more tedious and clichéd character analysis, but the two authors have a desperate need turn interesting particulars into boring generalities. They must have proposed the book on this basis: “We will draw the lessons from these business failures so that it has enduring value.”

The evident problem is that the many business failures, some so well described, have absolutely nothing in common. What possible relationship is there between an Icelandic retailer who takes on too much debt, and a Chinese powerbroker who crossed the wrong political wires? There is simply no common lesson to be learned from the extremely wide variety of intensely interesting characters who populate this book. One of them makes a fortune in recruitment, and then blows it all on a football team. Does this teach us anything at all about business?

Where the authors do concentrate on character and business together, they are the most successful. On Kevin Leech, a strange entrepreneur turned venture capitalist: “Leech embarked on one of the most random acquisition sprees the United Kingdom had ever seen. And random is the word. Like many entrepreneurs, Leech fell into the trap of believing that, because he was successful in one field, he could easily transfer those skills—and his acumen—to any other area of business. But while this approach may have worked for the likes of Virgin founder Richard Branson . . . there is only one Branson, and business theory and business practicality do no mix. The way Branson stretched his brand is the exception that proves the rule. Leech did not even have a brand.”

It is a great pity that the authors abandoned strong writing like that for commonplace moralizing, and readers are advised to simply skip the end of the book with its “lessons.” Here’s a mercifully brief sample: “The likes of Picasso, Van Gogh, and Leonard Cohen have all done some of their best work in the midst of despair.” Pulled it right out of Boys’ Life, guys? (By the way, there is no evidence that Picasso ever worked in despair; although he was poor at the start, that’s not the same thing).

But the collection of moral sayings is at the beginning and at the end, so stick with the far more useful and intelligent middle of the book. If, “the proper study of mankind is man,” as the 18th century poet Alexander Pope wrote, then it is the “human” part of this book that’s worth reading.