How the South Won the Civil War: Oligarchy, Democracy, and the Continuing Fight for the Soul of America 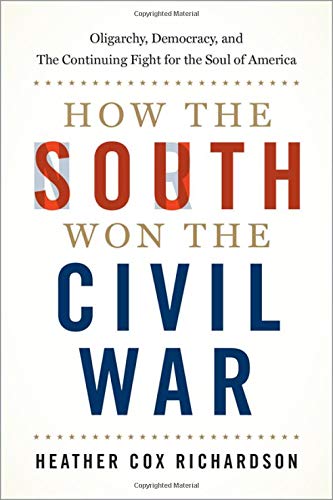 “Richardson’s scholarly work puts to an end the fantasy of American exceptionalism.”

America is a complicated place. With no established ideology to guide a national vision except the pretense of equality, our country is a delicate phenomenon. It can be fractured if we do not superintend. First, however, we must know who we are before we can bolster the better nature of our being.

Heather Cox Richardson, Professor of History at Boston College, furthers that process of self-discovery in her marvelous new book, How the South Won the Civil War: Oligarchy, Democracy, and the Continuing Fight for the Soul of America. Richardson’s search for the truth carries the reader from the first European settlers to modern day, not an easy task in a comparatively short narrative.  Her text combines articulacy with accuracy. Her analysis is compelling.

Along the way, Richardson focuses on Andrew Jackson, James Henry Hammond, Stephen Douglas, Abraham Lincoln, Frederick Jackson Turner, and numerous others to demonstrate her thesis that individualism and equality are opposites repelling. America is a paradox.

Richardson’s premise is that the Southern oligarchy that governed the slave states before the Civil War extended its control of American social and governmental norms after the War by spreading westward. She scrutinizes not only the treatment of persons of color, but also of women who are normally ignored in any retelling of the history of the United States. Her narrative moves quickly through the post-Civil War period until the 1890s when the oligarchs could rightfully claim they were victorious over workers, women, and persons of color. With only a few democratic intervals, the scheme has prevailed. White men rule.

The American ethos became one of personal selfishness, a fabricated excuse for government non-interference with magnate discretion. This American dream was a pretext for bigotry. Apparently, every white male inhabitant had the right to seek prominence by oppressing the underprivileged.

The symbol of the prevailing fraudulence was the American cowboy. As portrayed in popular culture, all cowboys were white, and their victims were Native Americans. They, and America, always won.

As Richardson arrives at the post-World War II era, she connects the past with the present. Our current president represents a continuation of all that has been dreadful about America: despicable racism, sexism, and homophobia. He is disgraceful. The Trump dogma is that America once was great when the nation’s life was run by elite white men. Regrettably, he is not yet finished with his plunder.

Richardson’s scholarly work puts to an end the fantasy of American exceptionalism. The country has flaws like every other country. America is a fine place to live if you are wealthy or wise, but not if you are poor and marginalized.