How to Read a Client from Across the Room: Win More Business with the Proven Character Code System 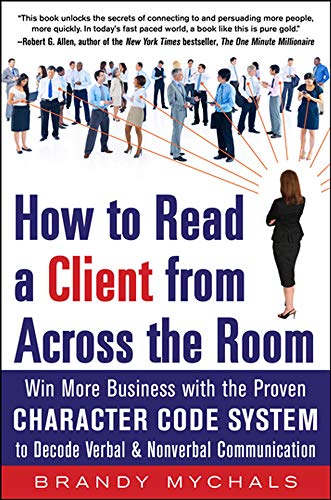 “Specifically for marketing and sales, How to Read a Client from Across the Room is a game changer. . . . promises to be a marketing classic.”

Just as Frederick Taylor introduced scientific management to the workplace, psychologists have applied scientific methods to study individuals’ personalities, systematically to classify their behavior attributes, and to synthesize the results into systems that are known as personality profiles. This work reflects the fusion of early 20th century exploratory psychology research plus initiatives by the military to group individuals by intelligence to facilitate assignments.

Personality typing has emerged as an important phenomenon in psychology, relationships, and the workplace. Among the leading systems are Myers Briggs, based on Carl Jung’s insights regarding individual types, intended to facilitate individual self-awareness and to identify the source of problems in relationships; the so-called Big Five (extraversion, agreeableness, conscientiousness, neuroticism, openness), derived from and widely used in academic psychology research; and DISC (acronym for dominance, influence, steadiness, conscientiousness), built on the research of William Moulton Marston.

These leading personality profiles are interesting yet challenging in application. After a person determines her/his type, what is the next step? What do you do with that knowledge? How is the profile to be used? Is it enough to know your own profile? What about others’ profiles? Other than asking directly, how do you find out someone else’s profile?

Questions outnumber the answers. The established personality profile systems are concerned with attributes that are invisible, neither seen nor observed. Consequently, they are neither easily accessible nor intuitively obvious.

Although it is suggested that these systems have applications for marketing and sales, until now this has been more of a concept then a reality. Not any more.

Specifically for marketing and sales, How to Read a Client from Across the Room: Win More Business with the Proven Character Code System to Decode Verbal and Nonverbal Communication is a game changer.

The Character Code personality typology that is described in the book differs from the most prominent established personality profile systems in three important respects.

First, the Character Code is visually based, so that it can be applied by personal visual observation, without tests.

Second, its scheme is based not on letters or numbers but words that represent well recognized and instantly comprehended character types drawn from different high school persona.

Third, while the Character Code has numerous applications, marketing and sales were its development motivation.

The six Character Codes, whose meaning is conveyed by their taglines, are:

1. Class President: Action speaks louder than words;
2. Cheerleader: I just want to have fun;
3. Actor: bigger, bolder, better;
4. Scholar: Where’s the evidence?;
5. Activist: Let’s all get along;
6. Artist: Fight to be free.

In application, one of these six is dominant, with another of the Character Codes exerting secondary influence.

Each of the Character Codes is profiled in terms of:

• Appearance: hairstyle, makeup, jewelry, clothing, accessories, nails, shoes;
• Presentation
• Speaking;
• Psyche: “The four driving needs that influence the majority of our decisions include certainty, variety, significance, and connection;”
• Character Traits
• The Inner Meanie: “that negative voice in our head we all have;”
• Conflict, Stress, and Emotions
• Health and Wellness
• Jobs and Careers: Marketing and Sales; and
• The Ideal Client.

The chapters conclude with advice other Character Codes might more effectively interact with—especially the important first meeting with that specific Character Code type.

The separate chapters devoted to each of the individual Character Codes are introduced by pictures that reflect the appearance of individuals who model that particular Character Code. The author advises: “It is essential to read about each Character Code and not just your own in order to effectively select your ideal client.”

The system presented here is credited for rocketing her to high stature in the entrepreneurial marketing world, for as Ms. Mychals writes, “I used Character Codes to make sure I created a product that served my clients’ driving need, and clients lined up at the door.”

This book makes the most valuable contribution by connecting the dots of answers to questions posted above re the practical application of personality profiles with the implications of the proposition that 55% of information is perceived and received visually.

While the dominant role of the visual is often mentioned in the context of marketing, communicating it is too often done in passing, without answering the critical question, “OK. What do you do with that information?”

The author’s premise is that visual appearance reveals character, for how a person chooses to present herself/himself to the world represents a window into the essence of that person.

She advises that first impressions not only matter, but are highly telling, for you can make or lose the sale at the very outset.

The objective is to attract your ideal clients by congruency in your appearance, your presentation, and conscious consideration of your work purpose (aka calling), the match between your offer and the ideal clients for that offer, and every aspect of your clients’ sensory observation and experience of you, as well as your offer, the sale, and your service delivery.

This teaching represents a highly customized, pragmatic application to the marketing process of Neutral Linguistic Programming.

Included with the book are 25 resources accessible via the internet. Some amplify on the core Character Code content, providing more detail and specialized information, such as “Driving needs for each Character Code and how to keep your client happy” and videos, slides, tips, resources, and visual images pertaining to each of the separate character codes.

One interpretation of Brandy Mychals’s Character Code system is a 21st century version of John Molloy’s very successful and highly influential Dress for Success, transformed from the first to second the third person, then merged with Dale Carnegie’s powerful How to Win Friends and Influence People expanded to the visual communications realm.

No marketing maven, ambitious entrepreneur, or behavioral professional can afford not to be aware of and apply the Character Code system. Brandy Mychals’s How to Read a Client from Across the Room promises to be a marketing classic.