How Not to Be Popular 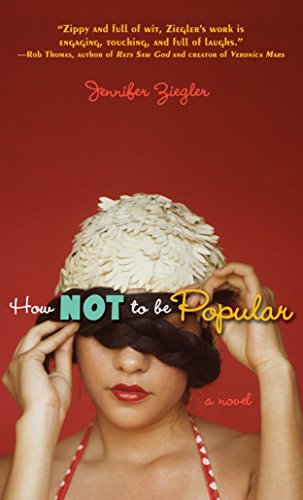 Popularity is easy. You just have to ask the experts: the military child, the remaining hippie children, or any child whose parents travel constantly for their profession. Popularity remains a mystery often only to those who stay put in one place all their life, but we travelers have studied and know the formula for success. It’s easy since it doesn’t really vary from place to place that much. As a military child myself, I am well versed in operations of fitting in and sizing up a new location, strategizing, and inching into the spot you covet. The one you think will make you happy. The one you think will make you who you’re meant to be. These battle plans are all familiar as well to the main character of Jennifer Ziegler’s How Not to Be Popular, which has been newly released in paperback.

Maggie Dempsey is a traveler. A child of free parents who feel the need to move on and never stay in one place for too long, never to own or belong to anything. Over and over again she has said goodbye. Goodbye to familiar places, friendships, and now that the time has come . . . goodbye to her boyfriend, Trevor. It’s the same every time: the promises to keep in touch, friends forever, but it never lasts. Each time she will slowly lose the life she once led and be forced into a new one where she must shift for herself and find her spot in the hierarchy of the high school world. However this time will be different. She can’t control the moving so she decides to control the feelings. If she makes no friends, no attachments . . . it won’t hurt to leave, right? And so she chooses to do everything she can to be unpopular, breaking every popularity rule we all know. However she forgets one thing, new is almost always popular at first, and confidence can make it only more so.

In a hilariously real novel about not just what makes you popular but also about what makes you you, Ziegler has created a truly special cast of characters that make How Not to Be Popular hard to put down. It’s a read that will be true to the modern teenager and yet still make those of us a little older remember that our high school experiences were not much different. Not much changes; trends may come and go, but popular stays pretty much the same. And no matter how much she tries, when you’re as unique as Maggie, well it just won’t let you slip by! Funny, honest and oh so relatable How Not to Be Popular is a must read book for teen girls or for that special someone who may barely remember what it’s like to be one.