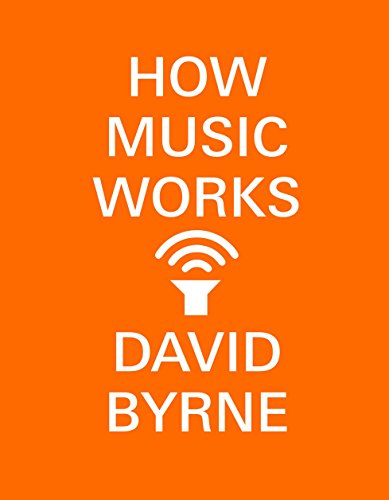 “Byrne touches on a broad array of forces that influence and shape the musical experience—from how it is created, performed, recorded, and distributed to more personally meaningful aspects . . .”

Should we consider a musician an artist, or is an artist a musician? That is the central question in David Byrne’s newly revised How Music Works. It is at once a combination of Music 101 and a revealing autobiography by the famous member of the Talking Heads. In this engaging tome, Byrne endeavors to explain how music broke free from elite circles to become the popular commodity it is today.

It is no small task he sets for himself. In 382 generously illustrated pages he touches on a broad array of forces that influence and shape the musical experience—from how it is created, performed, recorded, and distributed to more personally meaningful aspects of when, where, and with whom one listens to it. The book’s fundamental throughline is how music in all its facets affects the human experience.

One small quibble is that the thumbnail pictures at the page bottoms lack captions and thus seem unanchored. One wishes there were more information about the photos and the point they are meant to illustrate.

To be a musician is to live an itinerant life. Byrne certainly has traveled far, from Bali to Japan, to Brazil and beyond. He has worked in theater, with choreographer Twyla Tharp, and for years with Brian Eno while also managing to fit in country-western with a young John Goodman in the film True Story. He has openly incorporated a wide range of influences much like Yo-Yo Ma’s Silk Road project.

With a scholarly erudition he describes the musical changes he has witnessed. A broad brush sweeps us from opera house to African huts to music’s place in modern mythology. Byrne reminds us that the first sound recording was made by Edison in 1878, and that before then music was something people did rather than something they listened to passively.

The subsequent technology of sound recording makes him ask whether recordings are a “re-creation” of a performance or something different. He discusses how the limited running time of 78- and 45-rpm records changed composition styles, so that today a three-minute song seems natural. But in 1925 Stravinsky wrote his four-movement “Serenade for Piano” so that each movement could fit on one side of a record.

What changed music permanently was electricity and the introduction of microphones and amplification––the scourge of every performance goer who can remember the thrill of a naturally projected human voice. According to Byrne crooning “wouldn’t have worked without a microphone.” Crooner Bing Crosby in the 1930s and pianist Glenn Gould in the 1960s grew tired of having to give live performances. Each hurried along the development of tape recording and the “perfect” performances that resulted from splicing the best of multiple takes.

In The Business of Music Byrne describes the obstacles to survival that musicians face. How, for example, does a recording session reach the public? What are the paths by which music gets from composer to listener? This is a much more nuanced subject than readers may suspect. For budgetary reasons “the recording stories of yesteryear are unheard of now.” Gone are layers of producers, promoters, marketing people, and managers; now the model is one of self-distribution in which the artist is entirely in control but also entirely at risk.

Music gradually came to be “regarded as a product”: a thing that could be bought and sold. We reached a point of no return when you didn’t have to go to a performance, and you didn’t have to personally perform, either. “Other people did those jobs.” What changed is that “recording costs began to approach zero; manufacturing and distribution costs approached zero; artists no longer got big advances; and performing rather than selling records” came to be one’s main source of income.

Finally, Byrne asks “Why do we need music?” Where did this need come from? He argues, passionately, that it is part of what makes us human “even though its practical value is hard to pin down.” His musings range from Pythagoras’ music of the spheres to the gold-plated records on NASA’s Voyager and Cassini probes. “You might say that the universe plays the blues.”

He even opines on the neurological underpinnings of music, contrasting our dominant visual cultural with the alternative of a carefully considered acoustic one. He isn’t shy either about weighing in on music and emotion, meaning, and ritual. Even his discussion of different scales is entertaining—his explanation of why Western music uses 7 notes out of 12 possibilities whereas the gamelan of Southeast Asia uses a scale of only 5 is itself a mental voyage to places one didn’t know existed.

Byrne’s scope, analysis, and insights make for a fine volume of literary nonfiction. But will the children of the slam dancers who patronized CBGB read the conceptual parts, or will they wait to passively listen to snippets they can download from the iTunes store?