How to Measure Anything: Finding the Value of “Intangibles” in Business 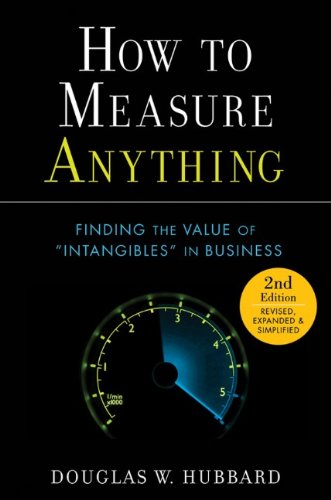 “Ultimately, How to Measure Anything is a treatise on decision making involving applied logic and behavioral economics. Indeed, perceptions of the immeasurable and mismeasurement are most often traceable to misframing what is to be measured and misperception of elements central to the measurement process. . . . How to Measure Anything: Finding the Intangibles in Business is recommended for anyone with decision making responsibility, and thus this book merits a very wide readership.”

Many respond to increasing complexity in society, commerce, and even daily life decisions by throwing up their hands in frustration and/or protesting that they have no idea how to quantify the consequences of many decisions or future events.

Some seasoned managers may assert that while they feel competent in evaluating some aspect of their business, they perceive that other parts of their business are too opaque, too remote, or too inaccessible ever to be comprehended, let alone to be measured. Lacking measurement, competent and confident decisions cannot be made.

How to Measure Anything is Douglas Hubbard’s reasoned, pragmatic refutation of those who assert, “It can’t be measured.” He proclaims that the misinformed perception of immeasurability is attributable to three reasons: misunderstanding the true meaning of measurement, failing to define crisply and clearly what is in fact being measured, and unfamiliarity with measurement methods basics.

Mr. Hubbard maintains that the widely held belief and costly myth “that certain things can’t be measured . . . is a significant drain on the economy, public welfare, environment and even national security. As a result, decisions are less informed than they could be. The chance of error increases. Resources are misallocated. Good ideas are rejected, and bad ideas are accepted. Money is wasted. In some cases, life and health are put in jeopardy. A belief that some things—even very important things—might be impossible to measure is sand in the gears of the entire economy.”

The author’s philosophy that anything can be measured and his contention that powerful measurements can be made with limited data are exemplified by the engaging story of how in the Third Century BCE, Eratosthenes employed two elements of information—the relative angle of the sun at midday in two places and the distance between those two places—to calculate the Earth’s circumference. Observing that the relative difference in the distance in the arc of shadows in Syene and Alexandria was equal to 1/50th of a circle, he hypothesized that the Earth’s circumference would be 50 times that distance, which calculation was within 3% of the actual measure.

Mr. Hubbard asserts that his book is intended to address “two things: one, intangibles that appear to be completely intractable can be measured; two, this measurement can be done in a way that is economically justified.” The author invites and encourages readers to visit his website, which contains more details not included in the book, plus discussions of measurement developments and applications subsequent to the book’s printing.

While many assert their problems are so complex that they cannot readily be solved, Douglas Hubbard proves that quantification of anything is possible. Central to this statement is recognition that measurement involves ranges of confidence. Indeed, the idea that the value of information is a function of how much uncertainty is removed because of that information is the foundation of information theory and what the author asserts is central to measurement in general.

Thus, if information has minimal or no effect on removing uncertainty, it has no value. Correspondingly, information that results in significant reduction of uncertainty has great value.
Douglas Hubbard presents four measurement propositions which are concurrently provocative and pragmatic. First, he says what is to be measured or the problem to be solved is more ubiquitous than most recognize. Second, the data needed to solve the problem are more accessible than is generally recognized. Third, much less data are actually needed than many think are needed. Fourth, what new data may be needed is more accessible than is broadly recognized.

Fascinatingly, the author asserts that for many decisions, no more than five data points are necessary, writing, “There is a 93.75% chance that the median of a population is between the smallest and largest values in any random sample of five from that population.”

In the same vein, concerning the role of very large numbers of variables considered for major decisions, Mr. Hubbard notes that the majority of variables are worthless: “Most of the variables in a business case had an information value of zero . . . something like one to four variables were both uncertain enough and had enough bearing on the outcome of the decision to merit deliberate measurement efforts.” These powerful insights suggest the consequence of diminishing decision quality at the very time of significantly increasing information, which implication contradicts the popular impression that access to much more information lends to much higher decision quality.

Although the author does not directly address the consequences of deficient decision making, a strong message from How to Measure Anything is that the recent spate of bad decisions in both public and the private sector is connected to deficient decision making and measurement shortfalls, specifically. Simply stated, many in senior positions inappropriately rely on decision factors that make no positive, constructive contribution to good decision making.

The presentation is facilitated by numerous charts and graphs to illustrate several of the concepts discussed. One particularly effective chart explores the consequences of different ranges of confidence, as reflected in relative reliance on prior knowledge and new data. The author explores four interdependencies of confidence, prior knowledge, and new data, which can lead to four dysfunctional decision states:

When gathering information, certain simple strategies can lead to more objective insights: precise and short questions - rather than compound, avoiding loaded terms with positive or negative connotations, as well as leading questions. Ultimately, How to Measure Anything is a treatise on decision making involving applied logic and behavioral economics. Indeed, perceptions of the immeasurable and mismeasurement are most often traceable to misframing what is to be measured and misperception of elements central to the measurement process.

Since measurement concerns the contribution of information to reduce uncertainty, risk is a central theme of Mr. Hubbard’s book. At one point he relates how a chief investment officer in an investment firm reveals that she was confident she could measures risk, but not the benefits of certain involvement. In response, Mr. Hubbard patiently explains, “If one can measure one facet of a phenomenon, then one can measure all facets.”

In this spirit, he tells the story of how an IT manager of an insurance company has an epiphany about the measurement process after asserting that it was not possible to measure risks associated with IT when confronted with the idea that his company’s actuaries were dedicated to understanding life expectancy.
The particular emphasis the author places on the Monte Carlo approaches—essentially involving a random process of simulation to consider the outcomes resulting from such random interaction at various variables—would be enhanced by more explicit exploration of how risk may be perceived in different circumstances and in the context of different concerns.

Mr. Hubbard employs numerous stories, case studies, dialogues between teachers and students, and other examples to make his case. His presentation has a cumulative, accretive effect, as application after application, story after story, example after example are layered on top of each other.

While How to Measure Anything involves neither higher math nor technical aspects of statistical calculations, the book does require some cognitive heavy lifting. Those inclined to do the heavy lifting are more likely to subscribe to the author’s thesis that anything can be measured, while those less inclined to do this intellectual heavy lifting, may at their core be at least somewhat susceptible to being intellectual lazy and, as a consequence, trapped in bad decisions.

How to Measure Anything: Finding the “Intangibles” in Business is recommended for anyone with decision making responsibility, and thus this book merits a very wide readership.

Those who are serious students of mystery, generally, and of masters of detection, specifically, will find that the analytic investigative powers of such legendary investigators such as Sherlock Holmes, Hercule Poirot, and Nero Wolfe are on display in this book. While many readers may not be inclined or even able to digest all of the content of this “math for business” presentation, the material in the early sections, before the author delves into the more detailed and technical aspects of the measurement process, more than justify investment in this book.