How Markets Fail: The Logic of Economic Calamities 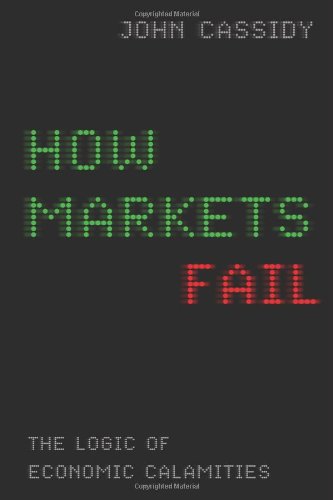 About 13 years ago, the German philosopher Jürgen Habermas wrote:

“The idea of a democratic society must suffer frequent reality-checks, if it is to inspire the practice of citizens, politicians as well as that of judges and bureaucrats. If the idea of democracy no longer has any link with reality, as many believe at present, there would no longer be any ‘citizens’ in any real sense, there would only be private individuals and social partners. In this case, social life would consist of individuals making their own choices, as opposed to free citizens taking part in a common national life. . . . Markets would determine the potential choices for everyone, based on the free market and its demands for adaptation.”

Author John Cassidy has done something that one rarely sees in American thought, which usually falls into the Scylla of meaningless jargon on one side, and into the Charybdis of chronicling what it sees as the leading actors on the other. He has examined the concepts that helped determine what the actors did, and he shows how those concepts fail. In this he is brilliantly successful. He also proposes a different conceptual view, which would take better account of the same actors and events—here we think he fails. But he provides a discussion that merits the attention of anyone who is seriously interested in economy and business.

Cassidy’s book, a mixture of classic investigative journalism and economic thought, starts out with a bang. He shows that the Fed and other U.S. officials were well warned about what could happen when real estate values became inflated and subprime mortgages became absurd. The warnings were rejected: current Director of the White House’s National Economic Council Lawrence Summers pointed out at the time that they were in contradiction with the “Greenspan doctrine.” (Is it good to know that he’s still in charge of the economy?)

Greenspan was indeed the champion of self-regulated markets, and his views prevailed. Greenspan was also chief banking and monetary regulator. What happened:

“The combination of a Fed that can print money, deposit insurance, and a Congress that can authorize bailouts provides an extensive safety net for big financial firms. In such an environment, pursuing a policy of easy money plus deregulation doesn’t amount to free market economics; it is a form of crony capitalism. The gains of financial innovation and speculation are privatized, with the bulk of them going to a small group of wealthy people who sit at the apex of the system. Much of the losses are socialized. Such a policy framework isn’t merely inequitable, it is also destabilizing. Once the Fed abdicates its responsibility of preventing excessive risk-taking, rational irrationality will eventually ensure that the system moves toward what Minsky referred to as Ponzi finance. By June 2003, this process was well advanced. In the two and a half years that remained before Greenspan’s retirement, it would become irreversible.”

That goes right to the heart of the subject, an essence that is endlessly larded with jargon and tendentious reasoning by other commentators. Cassidy’s prose lacks something in style—it would benefit enormously from a bit of Attic salt. But the logic is ironclad, and that makes the book very readable.

Cassidy explains where Greenspan’s ideas about self-regulation come from. He traces the tradition back to the Utopian economists and philosophers of the 18th century. He shows how these ideas were developed by economists and mathematicians like Hayek, Walras, von Neumann, and Arrow, and he shows how grave doubts arose about the validity of the free-market arguments. The role of Milton Friedman in perpetuating this tradition is fully discussed.

All of this led to the “efficient market” hypothesis, which Cassidy discusses in a chapter called “The Coin-Tossing View of Finance.” As the early 20th century economist Louis Bachelier pointed out, in a viewpoint later taken up by economists like MIT’s Paul Samuelson, investing in stocks is a random walk. Study the company you are investing in as much as you like; you have a 50% chance all the same of making money by investing in its stock.

This view had enormous consequences: It led to the development of mutual funds (why invest in a particular stock if the odds are only 50% that you’ll make money), and in the creation of the quant industry—since markets behave efficiently, mathematical models can take advantage to predict results.

What happened in practice is that millions of American bet on mutual funds for their pensions and retirement, and then a large part of that wealth was destroyed in the financial crisis. This wasn’t supposed to happen in an efficient, self-regulating market. Cassidy gives an entirely thorough, logical, and convincing explanation of how theory contaminated practice and tore the financial system apart.

The next part of the book discusses a different view of economics, “reality economics,” which Cassidy proposes as a better way to understand what happens in markets and in the world. Reality economics takes psychology into account, Cassidy maintains, and show how people really behave. Cassidy shows how the theory comes together with practice in the work of Hyman Minsky, who was an early critic of the risk-taking underway at the nation’s banks.

The final part of the book, a synthesis of all that comes before, shows what happened during the financial crisis in the clearest exposition we’ve had so far. Cassidy shows how the impact of theories about the markets and self-regulation combined to create a time-bomb:

“The Great Crunch wasn’t just an indictment of Wall Street: it was a failure of monetary policy and economic analysis. From the late 1990s onward, the Fed stubbornly refused to recognize the dangers that speculative bubbles present, adopting a hands-off stance that it still hasn’t publicly repudiated. The Fed’s refusal to prick the stock market and credit bubbles was partly a matter of political cowardice; it didn’t want to be attacked for bringing on an economic downturn. But the Greenspan approach also reflected an underlying belief that the American economy was a wondrous, self-correcting mechanism—the illusion of stability—and that it would quickly bounce back from any speculative bust. A formal renunciation of the Greenspan doctrine is long overdue.”

But that won’t happen because, “in the world of Utopian economics, the latest crisis of capitalism is always a blip.”

This reviewer applauds part three. Loves part one. It’s part two, about reality economics, that raises issues, although the mere fact that it could generate serious discussion makes it worth reading.

Cassidy wants economics to include psychology. That means that economists must also come up with a meaningful psychology, one that takes into account thought about how the mind works from Democritus, Plato, and Lao Tse to Freud to Lacan and Derrida. The psychology that Cassidy proposes, called “irrational rationality” doesn’t cut it. Here’s a sample (about two companies making a decision): “The way to think about this situation is that Firm A chooses a row and Firm B chooses a column. For example, if Firm A picks the first row and Firm B picks the first column, it means that both firms decide (a specific decision). The outcome is shown in the top left-hand corner. . . .”

It is incredible that a thinker of Cassidy’s distinction could propose something like this as a psychological model. But he is a victim of the so-called models that the so-called “social sciences” have been proposing for decades. The attempt to make psychology, history, and economics into “sciences” has been a colossal failure, and the contribution of these essential areas of thought to our lives has been almost entirely null.

Why has this happened? Because philosophy, the place where we think about how to think, has been left out of the equation. What’s needed is a Derrida-type deconstruction of all the logocentrism in economics, psychology, and history—and a new start.

Cassidy stops short of a real breakdown of what’s wrong. That does not make his work less valuable. But it does point to what needs to be done if we are to start making our ideas work again. The interesting thing is that American philosophy is just in the process of reconsidering its fundamentals, trying to get back to what was fundamental in examining thought in common with how European thinkers view it (nothing to do with Marxism or Communism, don’t worry).

But it would be wrong to allow these criticisms to detract from the value of Cassidy’s book. “Let it be said: The one who is only great, is also good enough,” wrote the great German poet and philosopher, Johann Wolfgang von Goethe.