How to Make a Spaceship: A Band of Renegades, an Epic Race, and the Birth of Private Spaceflight 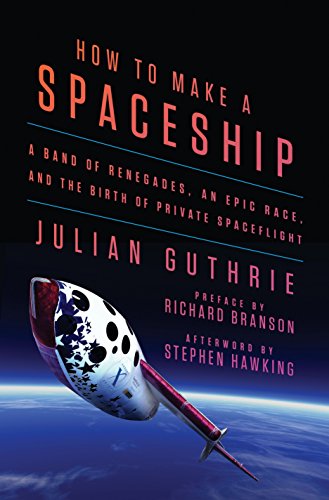 How to Make a Spaceship is a biography and a factual adventure story. There is more than one hero in this story—note the subtitle A Band of Renegades. Of the band, Peter Diamandis is the principal subject and driving force behind the XPRIZE, the 20 million dollar prize awarded for the first fully reusable commercial spacecraft. The band includes among others, Burt Rutan, the inventor of SpaceShipOne; Burt’s brother Dick; and SpaceShipOne’s two test pilots, Mike Melvill and Brian Binnie.

Author Julian Guthrie organizes How to Make a Spaceship into three parts. The first provides readers with backstory and ends with the establishment of the XPRIZE. The second spans increasingly frantic efforts to fund the prize, and the third covers SpaceShipOne’s test flights and spaceflights.

Guthrie writes with a “you are there” style, and her prologue is a “Perils of Pauline” cliffhanger—the first test flight of SpaceShipOne . . . Something has gone horribly wrong. . . . Test pilot Mike Melvill is in mortal peril. Will he survive?

In the opening chapters Guthrie provides backstories, giving each person of interest the their own chapter; and for a few, their lives won’t intersect until the announcement of the XPRIZE, which, like the prologue, will leave readers hanging, asking “What happens next?” for each and every chapter.

Like many tales of boyhood, Peter Diamandis as a child dreamed of spaceflight. The one singular difference was, as with many American heroes, Diamandis did not give up on his dreams. Here, Guthrie provides context, the space race to the moon, an event pivotal in the each member of the band’s imagination.

Inventor Burt Rutan’s backstory includes the design of the record-breaking Voyager aircraft. The Voyager was piloted by Burt’s brother Dick, copiloted by Jeana Yeager, and stayed aloft 200 hours circling the globe without refueling, more than twice the previous record. The Voyager weighed 2500 lbs. unfueled, and carried 6700 lbs. of fuel in its wings, which were so heavy the tips dragged on the runway during takeoff and tore off.  The wing tips contained the navigation lights, so the plane was unable to be tracked at night. For Dick and Jeana, “the sense of danger never went away.”

Burt started out as a civilian flight test engineer. In 1974 he opened his own aircraft factory for homebuilts, later starting the company Scaled Composites to design and build prototypes, including the Voyager. Scaled Composites also tested UAVs (Unmanned Aerial Vehicles), and one of Burt’s test pilots, Mike Melvill, rode in a jerry-rigged fiberglass saddle on top of a UAV to be able just in case it was needed, to override the controls. To see a blurry image of Melvill’s flight on top of a UAV, readers can google photo+mike+milvill+on+top+uav.

At this point How to Make a Spaceship seems to be a sequence of tall-tales along the line of “Can you top this?” For example, while an undergrad at MIT, Peter Diamandis founded a university on the MIT campus, the International Space University. Then he starts a rocket company, International MicroSpace. And at the same time he was managing both a university and a rocket business, he completed his medical degree at Harvard. Can you top that?

Julian Guthrie adds Erik Lindbergh into the mix. Erik is the grandson of Charles Lindbergh, the record holder for the first unrefueled transatlantic flight in a plane, The Spirit of St. Louis, which is now on display at the Smithsonian How does Erik fit into How to Make a Spaceship? The reader will just have to keep reading. . . .

The threads of individual biographies now intersect. Peter creates the XPRIZE prize after reading Charles Lindbergh’s biography, noting that Lindbergh’s flight across the Atlantic wasn’t self-funded but sponsored by wealthy backers intending to win prize money—in this case, the Orteig prize. Peter now contrives to meet with Erik to get Erik’s blessing and support for the XPRIZE.

The one problem with the XPRIZE prize was that the moment of its announcement, the XPRIZE had absolutely no money behind it.

The second part of How to Make a Spaceship covers the interval where Peter meets with ultra-high-net-worth individuals to beg them to become sponsors to fund the XPRIZE (and this reviewer would love to get his hands on Peter’s contacts list). Peter meets with John Carmack, founder of id Software and producer of the video games Quake and Doom, who said “no;” Jeff Bezos, who founded Amazon, who said “no;” Elon Musk, who said “maybe” but meant “no,” and Richard Branson, who said “no.”

Paul Allen, cofounder of Microsoft initially said “no,” later changed his mind—not for the XPRIZE but to fund his own venture—building a spaceship to win the XPRIZE. To do this, Allen agrees to fund the development of Burt Rutan’s SpaceShipOne on a handshake. In the contract that follows a year later, Allen was able to limit his risk with contractual wording that allows him to drop out of the venture at any time and take all the intellectual property with him—though this clause, thankfully, was not executed.

Acquiring funding for the XPRIZE turned out to be not as simple as a handshake as it was for SpaceShipOne, there was no billionaire in Peter’s contacts list that would do that deal. The funding for half the XPRIZE prize initially provided by a bank that hoped to capitalize on advertising and marketing—and there was a time limit on the sponsorship. That the funding was for only half kept Diamandis begging for more.

Eventually Peter found a solution. The bank’s sponsorship was replaced for the full $20M through an insurance policy that was called “hole-in-one” insurance. Hole-in-one insurance bets against success and is typically taken out for stunts such as for winning a Cadillac on the first hole-in-one in a golf tournament. Guthrie notes that the insurers later realized who they were up against betting against Burt Rutan and tried to renegotiate.

The third and final part of How to Make a Spaceship spans SpaceShipOne’s test flights and prize-winning flights. Prior to the official flight, Branson offers $2M to have his logo placed on SpaceShipOne’s tail, and on the day of the unveiling the tail was prominently displayed on TV, making it appear that the entire project was a Branson venture.

The key to winning the XPRIZE was that it was not won on the first flight, but on the second, in order to prove the spaceship could be turned around and reflown. Mike Melvill captained the first flight, and Brian Binnie the second for the prize. Binnie offers a reminiscence of the flight. Prior to boarding SpaceShipOne, Binnie’s mother-in-law gave him a hug. She was holding a coffee cup that spilled onto his back. Later in the cockpit, “Instead of experiencing some profound moments of illumination, Brian was overcome by something else—the smell of French vanilla coffee.”

The winning flight made a record and also shattered another, the long-standing X-15 altitude record. The NASA X-15 had been the first and only plane into space until SpaceShipOne, and held this record for 40 years; the X-15 is now in the Smithsonian.

SpaceShipOne is now in the Smithsonian, too. The XPRIZE’s current goal is to land a robot on the moon. Meanwhile, Branson is funding the construction and development of SpaceShipTwo.

If 2004 was supposed to be the end of government’s monopoly on space launch, what if anything, has happened between then and now? To answer that, readers will have to do the research on their own, as Guthrie is not so forthcoming except to tell readers to look forward to 2017.

How much did this reviewer enjoy reading How to Make a Spaceship? “Just shut up,” he replies. “Julian, you had me at Spaceship.“