How to Love a Country: Poems 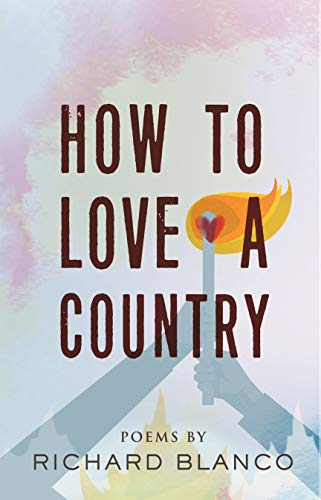 “Blanco’s power as a poet lies in the singular intimacy, structural craft, intoxicating imagery, and inner rhythms of his verse.”

When gay Cuban-American poet Richard Blanco recited his “One Today” at Barack Obama’s Inaugural Ceremony in 2013, he echoed Walt Whitman’s great themes of individual destiny within America’s promise of freedom, inclusion, and equality.

Blanco’s latest collection of poetry paints a very different picture of the American landscape than those verses of shared idealism and national unity. How to Love a Country meditates on a landscape of scabrous civil division, seemingly endless political fighting, and an increasingly racially divided country.

Blanco writes of his own journey of cultural alienation as growing up as “the other” on multiple personal fronts. In “American Wandersong,” one of the book’s central poems, he questions:

“. . . kindling my imagination still burning to understand . . . where I belong.”

“Destined to live with two first languages, two countries, two selves, and in the space between them all.”

These are themes Bianco previously explored in his memoir about growing up in a large Cuban immigrant population in Florida—The Prince of Los Cocuyas: A Miami Childhood—in which he was enchanted by the mythic view of the pre-Castro Cuba his relatives reminisced about and his own search to fulfill his own American dream in a country he had yet to understand. It reflected his private struggle to keep hidden his secret self as a gay boy growing up in an overtly homophobic environment.

“yearning to write myself into my other story, my other role, my other fictional character as a straight white boy of color in an American drama I didn’t quite understand, either.”

He stills yearns to understand his pasta and memories of his relationship with his parents in his poem “Now Without Me”:

“. . . now I want to believe there’s some god that only my pulse explains in sync—not only with this here

now—but with all I am from: my mother’s lavish black hair and sorrow, my father’s immense silence, my grandmother’s scolding that I crafted into a wisdom . . .”

He evokes images of his grandfather’s “iron-red memory of his Cuban mountains he never beheld again.” or what he depicts as the mysteries of his “Island Body,” “we’re our island’s sweetness as bitter/as the taste of having to leave it.”

Blanco’s power as a poet lies in the singular intimacy, structural craft, intoxicating imagery, and inner rhythms of his verse.

Now, Blanco, at age 50, is not only an out and proud Cuban-American poet, but he’s also questioning the realities of a hostile American cultural and political landscape that props up xenophobia, homophobia, racism, and corrosive civil discourse.

In his poem “Until We Could,” a lyrical meditation on generations of LGBTQ Americans not able to marry or escape societal condemnation, he writes of the life affirming realities of the lives of gay couples before LGBTQ civil rights movement.

And there are several elegiac poems that depict current events that Blanco seems to acknowledge are out of the powers of poetics to reconcile. At this point the verse becomes journalistic.

In “Como Tu / Like You / Like Me” {dedicated to the DACA Dreamers and all American immigrants}, Blanco is unflinching in his reality check about bigotry in America:

“Como Tu, I woke up in this dream of a country I didn’t choose, that didn’t choose me, trapped in the nightmare of its hateful glares.”

His stream of consciousness verse in “One Pulse—One Poem” contemplates the massacre of Pulse Nightclub that targeted the LatinX GLBTQ community in a supposed safe space during gay pride month in 2017. “Seventeen Funerals” memorializes the students who were killed and wounded at Parkland High School.

In “Complaint of El Rio Grande” the river’s waters speak :

Half of me us, the rest them.

But I wasn’t meant to drown children

Never meant to be your geography: a line, a border, a murderer.”

His optimistic echoes of Whitman have been tempered by an exiled spirit to give voice to what America could be and should be, but now is glaringly in a dissonant poetic key than his invocations in “One Today.”

How to Love a Country is Blanco’s j’accuse against a political culture that only seeks to divide and conquer everyone who doesn’t fall in line. Blanco is our blazing voice with the courageous blood of a poet, not afraid to confront the most troubling issues of our time.