How to Hit a Curveball: Confront and Overcome the Unexpected in Business 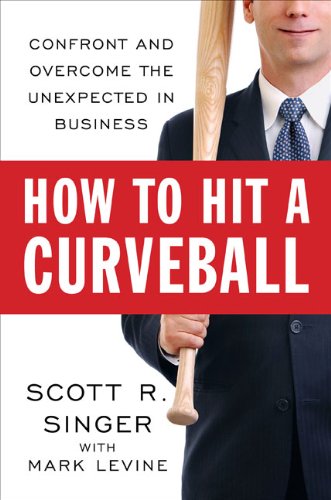 This isn’t a great book. That’s not to say it’s useless. It has value, like a recipe for mashed potatoes or buttermilk pancakes. But like those recipes, the information in this book is far closer to common sense advice from a seasoned career coach than to unique insights from the soul of a creative powerhouse—a decent meal rather than a gourmet feast.

Singer is a successful investment banker and strategy consultant who was laid off for the second time in his career while in the midst of this book project, and who used his own advice to connect with people he knew in previous positions to land a great-sounding job at a new firm. That was good.

But that first layoff, he writes, knocked him for a loop. He floundered. He flailed. He felt miserable. And he sought advice. What he learned, he tells us, is how to cope with relatively sudden and unexpected changes that life hurls at you, the way a baseball pitcher throws curveballs at opposition batters. Singer copes like a guy, by taking action. And he tells us how we can cope, too, like a guy, in terms of sports.

That’s one of the first problems with this book: the sports analogy. It’s weak because a curveball is not all that rare or unexpected, nor is it so very difficult to hit. In fact, if you can’t hit a curveball, you probably can’t earn a paycheck in baseball. If you’re a grown-up and you can’t handle one of life’s curveballs, then—depending on how you define a real-life curveball—it could easily take more than a book to help you.

Even worse, using a baseball analogy—complete with nine action-steps presented as the nine innings of a typical baseball game—means that most women probably won’t relate to this advice as well as Singer would like.

(Not to be picky, but hitting a curveball is not a nine-inning event, either. Trying to hit a curveball takes place during a single “at bat” controlled by the whole three strikes / four balls paradigm—and more to the point it’s actually a single response to a single pitch, which is only one among several pitches that conceivably aren’t all curveballs. But let’s not get lost in the curveball analogy.)

The bigger problem is that the information Singer offers is neither extraordinary nor rigorously thought out. In fact, in several places Singer contradicts himself, and in many more places he offers advice that in practice boils down to using our personal judgment.

Aside from a possible advance and a hope of making money, Singer apparently wrote this book as catharsis for a series of emotional setbacks he suffered in a fairly short time:

· The 9/11 terrorist attack (which his beloved brother barely escaped)· Suddenly getting fired, and· Experiencing a painful divorce.

Singer clearly didn’t like the feelings of helplessness and uncertainty these events brought up for him, and so he sought a way to cope with them. The result is what he calls “a process rather than a series of secrets.” His nine-step process, neatly divided into chapters that don’t entirely fit the curveball analogy, involves:

· Being the batter rather than the ball· Keeping your eye on the ball· Listening to your coach· Stepping outside the batter’s box· Waiting for your pitch· Becoming a home run hitter· Filling out your lineup, and· Outside the ballparkThat list seems like the yeoman work of professional writer Mark Levine, of such successful books as Die Broke, You Can’t Predict a Hero, and Second Acts. This time at bat, he seems to have struggled mightily to organize Singer’s unfocused information into some kind of coherent system, or at least into a larger analogy. The “curveball” idea won approval from the publisher, and hence we are offered this title and the book’s rather loose-fitting framework.

But even a spiffier title and a tighter framework would not change this sow’s ear of conventional wisdom into a silk purse of life-changing advice.

Among the large ideas in this book that need far more clarity and support is Singer’s notion that “going it alone is unnecessary.” To illustrate, he tells the story of Sony’s proprietary Betamax versus JVC’s industry-standard VHS technology—both developed in the mid 1970s and both capable of recording and playing back full-color video at home. Urged to join the pack and market the VHS system, Sony “stuck to its guns” and stayed with Betamax. It then faced a rising tide of VHS market dominance until it “de facto” capitulated in 1988, when Sony began marketing VHS machines, just like everyone else.

Fair enough. To drive the point home in the following paragraphs, Singer and Levine list many examples of successful teamwork, including Steve Jobs and Steve Wozniak of Apple.

Whoa. What a minute. Apple? Didn’t Jobs and Wozniak of Apple refuse to fall in step with the industry-standard IBM PC technology and instead stuck to their guns with their proprietary Macintosh line of personal computers? That seems to have worked out pretty well for them. So what was Singer’s point again about “not going it alone?"

There’s an even bigger one of these situations, where the argument isn’t uniquely supported by the facts, starting on page 114, where Singer tells us we’re “hardwired” to recognize patterns. With copious illustrations and geometric logic, he and Levine (are not the first to) tell us our brains automatically fill in the missing parts of pictures, organizing multiple simple shapes into unified complex patterns, and visualizing groupings among individual items. “We’ll likely,” writes Singer, “perceive a number of similar situations that aren’t necessarily connected as being part of a single situation. . . . These tendencies, while natural, can be problematic when facing a curveball.”

Fair enough. But if we’re so hardwired to see patterns, why didn’t Singer see the patterns that led up to his layoffs or his painful divorce? Why do we tolerate repeated coalmine safety violations or underwater oil drilling leaks without seeing a pattern of sloppy work or perhaps willful malfeasance? How come automobile drivers line up for half a mile at some lanes of a tollbooth and leave nearby lanes relatively underutilized?

No one disputes that we see patterns, sometimes in places they don’t really exist. But Singer doesn’t see or willfully omits the equal and opposite truth that we often fail to see undeniable patterns we would benefit from observing.

Here’s another sip of Singer’s weak tea: You know the whole brainstorming thing? Well, next time you’re trying to solve a problem, he says, don’t let the curveball get past you. Instead, try a technique he calls “reversal.” Instead of trying to solve the problem, think about how to make it worse. “The idea is to ask the opposite of the question you really want the answer to, and use this answer to help develop a solution to a curveball.”

His example? If you’re afraid of losing a client, don’t think about keeping him. Instead, think about guaranteeing he will leave. This reversal approach will spark your creativity, Singer asserts, and perhaps you’ll think of something like criticizing the client’s product or service. “Reversal,” writes Singer, then “leads you to the idea of offering them advice on how to improve their product or service.”

Not a bad way to keep a client, but perhaps the readers of this review can imagine a shorter, more direct route to the idea of suggesting product/service improvements without treading this convoluted path of “reversal.”

To put it plainly, this serviceable recipe for mashed potatoes isn’t much different from any other—even though its pages are illuminated with baseballs.

Reviewer Robert Moskowitz has written many books about financial planning, computers, and knowledge management. His articles have appeared in dozens of national magazines. He also won an Emmy for his writing and on-air work in KOCE-TV's series on personal finance: “Dollars and $ense.”