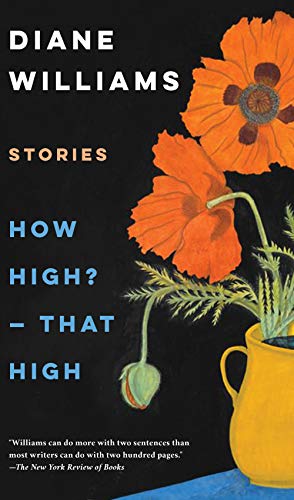 “For those familiar with Williams' work, her latest short story collection How High?—That High is more of the same: oft-perplexing, oft-illuminating.”

Diane Williams writes short stories that are dares. They dare to disorient, drawing near-subconscious connections between everyday happenings and emotional turmoil. Accordingly, her flash fiction also dares us to recalibrate our own reactions, forsake the easy roads of plot and character development, and meet her on her own idiosyncratic wavelength.

For those familiar with Williams' work, her latest short story collection How High?—That High is more of the same: oft-perplexing, oft-illuminating. At heart, the 34 stories address universal experiences—couples coming together and falling apart, the struggle to find one's place in the grand scheme—but in their almost abstract presentation, they communicate lives and emotions in flux, with thoughts and incidents making the barest of connections.

The collection's very first entry, "Upper Loop," sets the tone of emotional and physical displacement, as the teller of the tale finds herself stranded atop her roof, uncertain of what comes next. Many of Williams' tales present relationships under duress: A man strains to decipher the architecture of his lover's face in "Grief in Moderation," while an ex-lover attempts to "rattle and scatter himself" toward his former paramour in "How Much Did You Ever Think the World of Me?"

In other stories, tactile objects and surroundings gain mysterious, near-totemic significance. An office chair comes to symbolize a dead-end job and dead-end romance in "Have a Seat in the Big Black Chair." A rag rug in "Outcome" suggests a happy union that a confident cowboy and his mousy wife never quite attain. In "What Is Given with Pleasure and Received with Admiration?" a pot inspires a reverie about a woman with two unruly children, a vision that's left for us to interpret as either something worth striving for or avoiding.

In poetic, elliptical language, Williams often alternates between the inchoate and the tactile. Sometimes the contrast works a treat, as in "Inserted Into the Rest of Her," in which an undefined illness that threatens to tear a couple asunder is somehow assuaged by random trinkets and second-hand items that the couple stumble across. Other tales are all but inscrutable: a restless woman in "Thanks, Dot" spends a night at an inn ("Am I married? I don't know," she answers when queried), the point of view shifting from third to first person, the imagery straying from the moon in the night sky to a glass frog at a county fair, as the story struggles to physicalize what's going through her head.

This isn't to say that How High?—That High is an airless, high-falutin’ exercise in literary experimentation. Humor and simple loveliness often peek around the corners, and Williams has a way with a memorable turn of phrase. A portrait of a late father is described as "never suffering from the waist up," while "It's So Effortful" amusingly equates the contortions of sex to climbing a tree like a monkey. Most touching is the title story, in which the narrator's memory about an awkward dance at a grade school party merges with how he regards his relationship with his wife: similarly awkward, similarly magical.

One's patience for How High?—That High depends on how one responds to the ways Williams deviates from the expected. For every seeming non sequitur that nonetheless hits a chord, there's a cryptic bit of conversation or random observation that resists explication. "Where did I end up? Not anywhere near intellect," muses the narrator in "Sight See"; indeed, to draw resonance from Williams' stories, one must surrender to the ebbs and flows of her language rather than wrestle with its intelligibility.

"Nick Should Be Fun to Be With," probably the most representative story in the collection, might best sum up Williams' intent, as a couple's domestic placidity barely conceals the churn of uncertainty—and yet, life continues to move on in mysterious ways. "Just a moment ago, they lived, pleasingly ever after, by such a narrow margin," Williams concludes, in a line equal parts piquant and engimatic. How High?—That High flows back and forth between those two modes, creating a unique headspace that invites revelation even as it playfully breaks the rules.