How to Get Rid of a President: History's Guide to Removing Unpopular, Unable, or Unfit Chief Executives 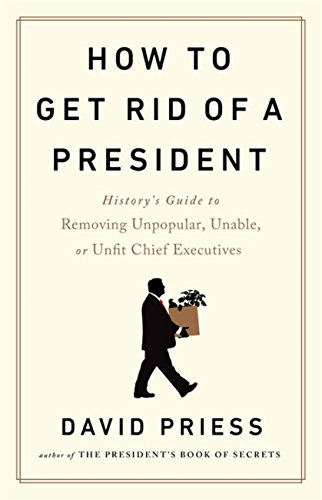 “If removing a president was easy, Congress would probably do it all the time, since that august body is populated by the representatives of a fickle, emotional, and befuddled populace.”

So how does the United States get rid of a president? David Preiss, a former intelligence officer for both the CIA and the State Department, elucidates different methods over several chapters in his book, How to Get Rid of a President: History’s Guide to Removing Unpopular, Unable, and Unfit Chief Executives. The book offers vignettes in American history that entertain and educate about these challenges to a functioning democracy. The current fractious political climate makes this book a valuable guide to how democratic processes can (or should) work, especially when the Oval Office has a corrupt racist dingbat in charge.

Preiss illuminates each method of removal with examples taken from American history. These methods for removal include: impeachment, death, physical ineffectiveness, and assassination, among others. Preiss’s employment in the Central Intelligence Agency shades the book’s theme, although this is due more to the notion of guilt by association. The CIA’s role in the removal from office of Iran’s Mossadegh and Chile’s Salvador Allende give voice to paranoid conspiracies about the Deep State and the abuse of executive power. Luckily, How to Get Rid of a President is a book of historical analysis, not a how-to manual.

While impeachment and assassination are well-known methods of removal, Preiss has a chapter entitled “Dismissed Preemptively.” The chapter charts the rise of Kentucky legislator Henry Clay and his foiled attempts to win the presidency. Sometimes the best method of getting rid of a president is to not make him (or her) president in the first place. Clay was a political wunderkind of antebellum America, but his machinations with electoral votes in the Adams-Jackson race cast Clay as a “Judas of the West.” He manipulated votes, giving John Quincy Adams the presidency and earning the ire of Andrew Jackson. As Adams took the presidency, “Clay took office in early 1825 as the ninth secretary of state.” Meanwhile, “Jackson fumed and prepared his revenge.” (A similar situation would occur when a future secretary of state would be the victim of a reality game show host’s revenge.)

The divisiveness and coarseness of today’s political discourse would seem shocking, especially with the Oval Office befouled by a former network TV personality addicted to Twitter and white nationalism. Yet history shows that the American public’s hunger to be ruled by celebrities is neither new nor unpredictable. Preiss explains the American penchant to elect corrupt, racist, incompetent bloviators was not limited to the milieu of Hollywood. Before TV, radio, and the movies, America elected generals, treating them the same way Americans revere A-listers. Chester Alan Arthur, the former Collector of the Port of New York, and Warren G. Harding, a corrupt whore-monger, illustrate how the Oval Office had all manner of scallywags and degenerates as its tenant.

William Henry Harrison is known for his death shortly after attaining office. What isn’t well known is the lack of legal writ governing presidential succession. After President Harrison died, Vice President John Tyler succeeded him. It wouldn’t be until the 20th century with the passing of the 25th Amendment in 1967 that presidential succession would be codified. Before then, the government simply followed an accepted tradition of the vice president becoming president. Only after the deaths of Franklin Delano Roosevelt and John F. Kennedy did the country realize it would need more than tradition to insure a peaceful transition of power.

Similar to death, the threat of assassination loomed large for the chief executive. Like presidential succession, counteracting the threat of assassination was rather informal at first. It wasn’t until the Civil War that the president had a security detail. “With the possible exception of Abraham Lincoln, no president faced such a diverse and elaborate set of threats to remove him by force than Franklin Roosevelt,” Preiss states.

FDR makes an appearance in several chapters, because during long tenure in office he faced assassination, illness, and eventually died in office. But this remained casual and relaxed until the onset of the Cold War and the Kennedy assassination. Only then did the president’s security detail become closer to a military operation. It is no mere fluke when Preiss mentions that office holders of the presidency face more health risks than the general population.

Besides the immediate threat of assassination, President James Madison faced the unique threat of military occupation during the War of 1812. What contingencies were in place if the president were captured by a foreign military power? Today the United States possesses an exhaustive line of succession if faced with a monumental catastrophe. There is also the figure of the Designated Successor should the unthinkable occur. Air Force One was a rollicking action movie, but what are the contingencies if the president is kidnapped by terrorists? And what about if a president has questionable loyalties to a hostile nation? Or fails to disclose his tax returns that may have incriminating evidence? What controls are in place for democracy to continue working when the worst possible scenario is upon it?

The impeachment trial of President Trump reflects both the powers and limitations of the political process put in place by the US Constitution. Preiss profiles different impeachments, from Andrew Johnson to Nixon and Clinton. But impeachments, like war, are never the same. What happens when different parties control different branches of Congress? Nixon’s impeachment had the glaring eye of television, yet Trump’s has the fun-house mirror of social media. What will it mean if he is removed from office? Perhaps the United States will join the rest of the civilized world (from Brazil to Bolivia) in removing its presidents in peaceful fashion. Or perhaps he isn’t removed? Then a historian shouldn’t be asked, but rather a Vegas odds-maker.

Removing a president isn’t easy, nor should it be. Like voting, it is an important role not to be taken lightly. If removing a president was easy, Congress would probably do it all the time, since that august body is populated by the representatives of a fickle, emotional, and befuddled populace. Preiss’s book offers a retrospective tour through the variety of methods used to remove a president from office. Because the United State values peaceful transitions over abrupt removal, many methods remain untested. Yet removal from office of a dangerous incompetent or corrupt demagogue doesn’t exhibit how the democratic process is broken. It shows how democracy still works. Regardless of where an individual stands in this hyper-critical moment in time, How to Get Rid of a President offers an easily accessible, highly entertaining education in American civics.