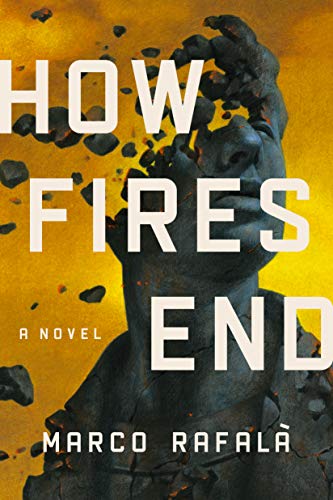 “Rafala seems to love language as much as his characters love their farms and their patron saint. That’s a powerful combination, and it fuels a compelling novel.”

In the impressive debut novel How Fires End, these sparks set off a chain reaction of violence, frustration, and grief that spans three generations, from a small town in World War II Sicily to an Italian American community in Connecticut in the 1980s.

“Sometimes my father was [the mythical monster] Typhon . . . trapped under a mountain of rock but still burning and angry at everyone, even me,” thinks David Marconi, the 13-year-old, American-born scion of a family that his Italian émigré neighbors consider malocchio—cursed by the Evil Eye. “But I understood that Typhon was something else, too—a secret, long-simmering hatred between Rocco Morello and my father. And my lie had banged on that secret . . . It had freed a monster not even the gods could tame.”

An actual explosion launches the chain reaction: As the small Sicilian town of Melilli cheers the arrival of Allied forces in August 1943, a munitions shell explodes in a quiet almond orchard, killing the young twins Emanuele and Leonello Vassallo. The town’s celebration collapses into mourning.

The people of Melilli have always felt a deep connection to their land and veneration for their patron, Saint Sebastian. But for the twins’ nine-year-old brother Salvatore—who will become David’s father three decades later—their death destroys his faith in Saint Sebastian. The town is no longer his home.

Shortly before this tragedy, an Italian soldier named Vincenzo Giordano briefly strays through the mountains where the residents of Melilli are hiding out from nearby fighting. Although he knows that the Fascist government whose uniform he wears is collapsing, and he’s tempted to stay with the Vassallos, he continues on with his German comrades.

After the war ends, Vincenzo, Salvatore, and Salvatore’s sister Nella emigrate to the “Little Melilli” enclave in Middletown, Connecticut. Salvatore and Nella change their last name and never tell David the truth about their past in Sicily

They cannot escape either their ghosts or their neighbors, however.

“All I ever wanted from life was a nice piece of land with good soil to till, and a son to till it with me,” Salvatore imagines telling David. “I should have been the pole and the support string when your little pea shoots reached out from the soil.”

Salvatore and Nella aren’t the only characters in this novel who try to control their own fates, rather than constantly be pawns of their history. Sometimes these efforts are too late; sometimes they backfire.

Author Marco Rafala, who is also a musician, carefully weaves the complex strands of this story in reverse chronological order, seeding hints of the various secrets.

For the most part, it’s an engrossing narrative. However, both the beginning and ending drag out too long, dissipating the tension.

And in light of the emphasis on Vincenzo’s past as a soldier of the Mussolini dictatorship, the novel would have gained depth if it had shown how he was seduced by Fascism.

As he spins his tale, Rafala also spins out one stunning description after another. When Salvatore rushes to protect David from getting beaten up, “he moved like a gnarled old tree uprooted from the soil by gale and gravity.” When he’s shocked, “his eyes bulged like two hard-boiled eggs bursting from their shells.”

Rafala seems to love language as much as his characters love their farms and their patron saint. That’s a powerful combination, and it fuels a compelling novel.

Fran Hawthorne is the award-winning author of eight books on business and public policy. Her debut novel, The Heirs, was published in May 2018 by Stephen F. Austin State University Press.