How to Cool the Planet: Geoengineering and the Audacious Quest to Fix Earth's Climate 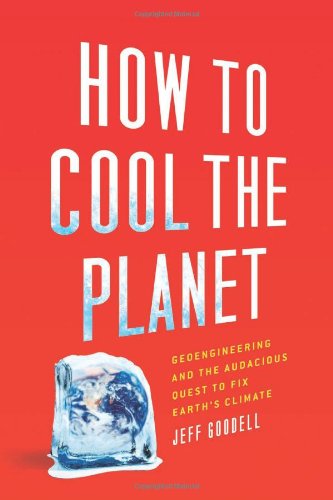 Geoengineering is defined as man’s audacious attempts to intervene in the complex processes that maintain the balance of life in terms of the inter-dependency between life forms and the environment.

Today, for instance, greenhouse gases have been shown to be responsible for the gradual warming up of the planet. This, in turn, causes more melting of the glaciers that flow into the oceans. Thus the rising sea-level is leading to much more complex results such as the erosion of land, destruction of flora and fauna, changes in the salinity of land which becomes infertile, etc.

Geoengineers hope to reduce the percentage of carbon dioxide in the atmosphere so that global warming reduces. They offer numerous sci-fi like ideas, such as throwing billions of tons of iron powder into the oceans to encourage more formation of plankton that gobbles up carbon dioxide and form corals. This sounds sensible enough. Or blocking the bright sunlight by throwing up tons of micro-particles through artificial volcanoes so that less heating of the planet takes place. Many more audacious suggestions are discussed in this book.

Perhaps Paul Crutzen, who won the Nobel Prize for atmospheric chemistry work that led to the discovery of the ozone hole in our atmosphere, marked the beginning of geoengineering on an idea-generating stage. More credit goes to other scientists, who capitalized on Crutzen’s failing to associate the now-banned CFCs (chloro-fluorocarbons) with the destruction of the ozone layer. The book provides a succinct and facile survey of the other scientists who worked on various other ideas that proved the link between environment and dependence of life-forms on it. James Lovelock, who had to face opposition for decades for his hypothesis that the earth is a superorganism, is given a lot of coverage to show that his ideas have built a solid platform for furthering the scope of work in geoengineering. Though we do not see any gigantic projects like artificial volcanoes nor dumping of iron powder into the ocean, nor a giant sunshade–there is much less resistance in scientific circles to such ideas.

Goodell provides a whole chapter on design and fabrication of a giant carbon dioxide scrubber by the innovative scientist David Keith. The machine sucks out the small quantities of CO2 gas from the atmosphere. As it is, only 335 particles per million is the amount of this powerful GHG (greenhouse gas), hence the design and assembly would understandably be complex and daunting. He describes Keith as a laidback scientist with a mission, and paints his portrait in words nearly alluding to science’s version of a pop prophet—which makes the whole denouement of the story on Keith rather engaging and entertaining, apart from being educational.

A more entertaining example is that of Charles M. Hatfield, whose rainmaking experiments succeeded long ago, but lack of control on the outcome caused several flooding disasters, and the innovator had to flee from his home to save his skin. A little more disturbing is the example of Edward Teller—the megalomaniac behind the underground nuclear explosion in the Nevada desert that produced a hole in the ground so large it is now a tourist attraction. Frighteningly, Teller constantly talked of razing down mountains and cutting across land-bridges to create channels for connecting seas or oceans. That would be real geoengineering on a grandiose scale.

While reading Goodell’s detailed account of some “earth-changing events” one wonders if the geoengineers are really prophetic visionaries who restored the ecological balance or reduced the pollution or GHGs, or if they are grown-up kids who had no clue about the disasters their experiments could have wrought. Teller’s example is a classic counter-example wherein one gets creepy sensations reading about those calculated nuclear explosions to cut through the earth’s crust. He seems to be skipping over the ill effects of radiation and secondary or tertiary reactions that can complicate the delicate balance of our fragile ecosphere. After a few such chapters on these cranks, one gets a an eerie feeling—they seem so focused on the little good that may happen that they cannot visualize the huge evil that may follow in the wake of some of their experiments. Also, some do-gooders seem unfazed by the fact that the successes in their gigantic scale experiments seem minuscule right now. For instance, Keith manages to suck out only 5 ppm out of a whopping 335 ppm of CO2.

The chapter on Hatfield stands out as a prime example of Goodell’s wonderfully balanced presentation. This chapter is a slightly humorous look at the history of geoengineering presented in his characteristically crisp style. Hatfield is deliberately painted as a larger than life figure, though his empty boasts feel hollow to the reader. There is a string of comic happenings, and these anecdotes sharply outline the possibility that geoengineers today who claim to cure the ills of the ecosphere with their never-yet-tried solutions may meet the same fate as some of their wacky experiments. Despite his megalomania and his occasional successes alternating with abject failures, Hatfield somehow endears himself to the reader as a real life hero.

In summing up, one can surely say this is a seminal work on a topic that was outside the accepted in scientific circles as recently as five years ago. The author has done a commendable job of sketching the harsh realities as well showing rosy glimpses of problem solving on a global scale. In presenting elaboration on such topics, it is usual for an author to take up sides and stress the affirmatives, while concealing the negatives. Goodell does not hide the low rate of success or high rate of failure when presenting various select cases. His writing style is simple, lucid, and candid. His treatment of a scary subject that only specialists would dare to write about (and end up making the treatise terribly soporific) is very reader-friendly. How to Cool the Planet is an excellent book, with lots of information that seems pertinent and useful in our uncertain times.

Reviewer Maxi Babi is a scientist and freelance author.