How to Change the World: Reflections on Marx and Marxism 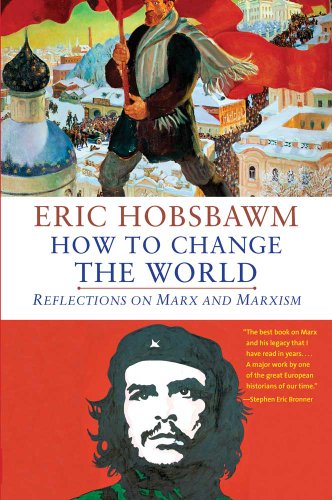 “Marx’s take on analytical concepts such as “use” and “exchange” values is still valid and potentially very useful for understanding how the lack of regulatory intervention has allowed our financial system to develop into an autonomous arena with only an anemic relation to the real-economic system of production—a dangerous development indeed.”

“In place of the old wants, satisfied by the production of the country, we find new wants, requiring for their satisfaction the products of distant lands and climes. In place of the old local and national seclusion and self-sufficiency, we have intercourse in every direction, universal inter-dependence of nations. And as in material, so also in intellectual production (. . .) Modern bourgeois society (. . .) is like the sorcerer who is no longer able to control the powers of the nether world whom he has called up by his spells (. . .) It is enough to mention the commercial crises that, by their periodical return, put the existence of the entire bourgeois society on its trial, each time more threateningly (. . .) The conditions of bourgeois society are too narrow to comprise the wealth created by them. And how does the bourgeoisie get over these crises? On the one hand, by enforced destruction of a mass of productive forces; on the other, by the conquest of new markets, and by the more thorough exploitation of the old ones. That is to say, by paving the way for more extensive and more destructive crises, and by diminishing the means whereby crises are prevented.” —From The Communist Manifesto

According to Eric Hobsbawm, Marx may not have had the solutions to the inherent problems of capitalism, but what he did provide was an accurate description of its socioeconomic and cultural impacts, and of its growing incapacity to contain its own crises. Excerpts like the one above from The Communist Manifesto appear to prove him right.

How to Change the World is marked out by its author as “a study of the development and posthumous impact of the thought of Karl Marx” and the latter’s relevance for contemporary economic and political theory. The book comprises a series of essays tracing the development of Marxist thought, from its early days, already during Marx’s and Engel’s lifetimes, to the end of the 20th century. It is as much a history of the ideas entailed in Marxism as it is a history of the cultural and political milieus (and scholars) that impacted on the reception of Marx’s thought and contributed to its diffusion and uptake. The journey begins with the French political movements of the 1830s and the work of early socialist theorists such as Charles Fourier and Saint-Simon, and ends with the Fall of the Iron Curtain and the dismantling of real-socialism.

Mr. Hobsbawm thinks that the political and, especially, the cultural impact of Marxism have been disproportional to its theoretical bearing. In Eastern Europe and the former Soviet Union Marx was used, or rather abused, to construct totalitarian states; in Western Europe, he inspired more than one generation of public intellectuals and artists, contributing significantly to the struggle against fascism and Nazism, albeit at the expense, in the 1940s and early 1950s, of a timely recognition of the perils of Stalinism. Within academia, Marxism has had a strong impact on sociology and political science, less so on economics and history.

This is regrettable, argues the author, considering that the strength of Marxist thought lies in its appreciation of both context and history. By contrast, Marx’s and Engel’s theory and understanding of politics, and by default the role of the state, was weak—a flaw which was addressed well only by Gramsci, a thinker whom Mr. Hobsbawm admires even more than Marx, describing him as a born intellectual, “a man almost physically excited by the sheer attraction of ideas” distinguished by “his refusal to leave the terrain of concrete historical, social and cultural realities for abstraction and reductionist theoretical models.” Using both Marx and Gramsci, it should be possible, or so Mr. Hobsbawm contends, to address the pressing problems of today as recently exemplified by the 2008 financial crisis. As he puts it in the introduction, even though “we cannot foresee the solutions of the problems facing the world in the twenty-first century . . . if they are to have a chance of success they must ask Marx’s questions even if they do not wish to accept his various disciples’ answers.”

Mr. Hobsbawm’s book is a fascinating excursion into the development of ideas and the roundabout ways they take when they begin to travel across continents, political contexts, academic disciplines and schools of thoughts. The book is less comprehensive in its substantive discussion of the contemporary relevance of Marxism as an economic and historical theory, and of the work of Gramsci on politics as a theory of argumentation. Consequently, Mr. Hobsbawm’s plea to “take account of Marx today” put forward at the beginning of the book remains as programmatic at its end as it was at its outset.

Perhaps, this is also because, in fact, Marxism is today no more relevant for economics and politics than either Freud for psychoanalysis or Darwin for evolutionary theory. Marx, together with Weber and Durkheim, is rightly considered a founding father of the social sciences and must be credited, now and in the future, for his succinct analysis of capitalism and its discontents—long before the scope of these discontents would materialize and appreciated as such.

But it is misleading to expect a deeper look into Marx to provide detailed solutions to the problems faced by our societies. Neither Marx nor Gramsci were reductionist in their analysis of specific historical contexts, but they both tended toward simplification when trying to think of solutions to the problems faced. For instance, the idea of class as a homogeneous category (in material and ideational terms) with a hegemonic potential (in political terms) is as romantic and dangerous as that of “the” nation.

This said, Marx’s take on analytical concepts such as “use” and “exchange” values is still valid and potentially very useful for understanding how the lack of regulatory intervention has allowed our financial system to develop into an autonomous arena with only an anemic relation to the real-economic system of production—a dangerous development indeed.