How to Change Minds: The Art of Influence Without Manipulation 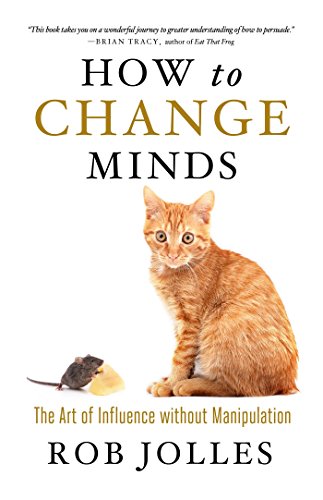 Change applies at so many levels and constructs: culture, society, family, work, business, governments, technology, etc. Even though change is accelerating—so many resist change. If you are engaged in the persuasion business of sales, getting people to change their minds is a precondition to making the sale.

Getting people to change their minds is the concern of sales trainer Rob Jolles, whose How to Change Minds: The Art of Influence Without Manipulation is a long form narrative of what seems to be his front of the room speaking presentation. The author frames the change process as analogous to the buying process in a sales transaction.

One way of thinking of How to Change Minds is as a higher level sales strategy. This book presents what the author has learned over a three-plus decade career starting at New York Life, then sales training at Xerox, and subsequently teaching people how change others minds.

That said, the author is explicitly dismissive of the manipulative hard sell approach, asserting, “Look closely at the snake oil that is being peddled, and what you will really find are a couple of legitimate tactics sandwiched within a number of approaches that look more like con games than commitments.”

The way to get people to change their minds is to “ask questions, listen, let those who are communicating paint their own picture . . . work meticulously to allow the people that we are communicating with to own the conversation we are having. It’s not about us; it’s about them. If we do this, when we get to the solution, we get to use the words, ‘you said’.”

Rob Jolles advances a basic change initiating process of involving an introduction. He suggests posing a summary commitment in the form of the question that must be answered affirmatively. Next, ask for a commitment. With that in hand, “the only thing left is to work out the logistics to implement the commitment that has been made.” Assurance is necessary and absolutely crucial, the author advises, so “that when they reconsider, let them hear your voice in their minds telling them they made the right decision.”

How to Change Minds reads like a sales training speech that unfortunately at times veers too far into the shallow and simplistic. Recognizing that personality informs the persuasion process—and after acknowledging the relevance of personality tests—Rob Jolles writes, “Full personality assessments are great management tools . . . but they won’t be a lot of help when you are training your eyes on someone you are meeting for the first time. What will work is studying how someone dresses, how an office or home environment is setup or even learning to read personalities from emails and voice mails.”

He recognizes, “These kinds of reads will give you a head start, and your early questions will allow you to fine tune your assessment.” He seems largely innocent, however, of the domain of psychology profiles and some of the fascinating recent developments therein. He simplistically suggests that all you really need to know is whether a person’s personality is dominant, analytical or social.

In this regard, he observes “I’m as interested as the next guy in learning more about myself, to be a better person, but, quite frankly, I didn’t want this to be about me. I wanted it to be about the person sitting across from me.” His innocence of the psychology realm is evidenced in his lack of awareness of a system and book that does precisely this: How to Read the Client from Across the Room by Brandy Michaels, reviewed in New York Journal of Books in October 2012.

But right after displaying a less than competent command of what the book’s promotional copy proclaims is “decades of research,” the author then delivers the profoundly valuable insight that rewards should be focused on process and effort—which if pursued consistently ultimately will lead to success—rather than outcomes—which so often can be attributable to uncontrollable, even random circumstances.

He writes, his “reaction to either winning or losing has never been that different.” He suggests, “Those who manipulate define victory solely by the chains they create. Those who influenced to find victory by the ethical effort they put forth in their attempts to bring about change.”

How to Change Minds, with much discursive commentary intermixed with some irrelevant and/or self-referential stories, is positioned at the content light end of the spectrum, far from such self-help standards as those by Dale Carnegie and Stephen Covey. That said, this book exemplifies the proposition that valuable insights can be found even in works that might be considered less than impressive.