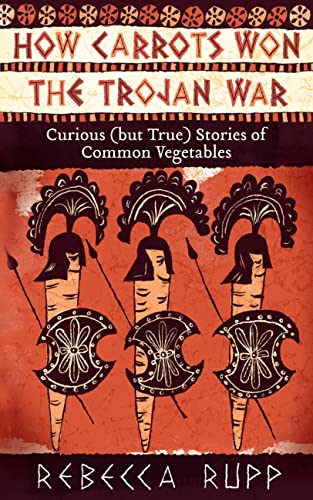 “Rebecca Rupp has done us the favor of serving up a savory history of something many of us don’t think much about—vegetables. . . . How Carrots Won the Trojan War assembles a palatable cornucopia of these stories, both satisfying and delicious.”

Everything has a history, although we may not often stop to think about it. Horticultural or culinary history can be particularly well hidden, as though it only lurks under leaves or high up on branches or has perhaps been buried under a heavy sauce. The history is there, however, and Rebecca Rupp has done us the favor of serving up a savory history of something many of us don’t think much about—vegetables.

Why bother? you may ask. It may seem unnecessary. But as with every history, How the Carrots Won the Trojan War: Curious (But True) Stories of Common Vegetables helps explain the way we are now. In a collection of amusing and edifying anecdotes regarding 20 different vegetables, Ms. Rupp regales us with the origins of these plants and the surprising roles that they have played in human civilization.

How Carrots Won the Trojan War is a compilation of factoids and stories, trivial and not so trivial, that attempt to undo the disassociation that most modern eaters have with the origins of the food they eat.

Ever wonder why peas are often served flavored with mint? (The practice started because early pea varieties were starchier than what we eat now and the mint helped to cover up the taste.)

Or why some vegetables, like celery or endive, came to be blanched? (Covering up the nearly-mature vegetables in the field keeps the plants from photosynthesizing, leaving them whiter, sweeter, and more tender.)

Or where the term “jack-o-lantern” came from? (It seems to have originated in the British Isles with a blacksmith named Jack who made a deal with the devil.) If you’ve ever eaten squash blossoms in a four-star restaurant, it might interest you to know that Montezuma also dined on the tasty flowers. Salad-eaters should note that Thomas Jefferson insisted that at his gardens in Monticello a thimbleful of lettuce seed should be sown each week from the first of February to the first of September—a classic example of succession growing that home gardeners today would be wise to emulate.

As Americans have become increasingly interested in food and gardening, histories such as the ones Ms. Rupp has rounded up in this book take on more significance. As home gardeners and gourmands look to heirloom varieties, the stories of these intrepid plants and their delicious and sometimes odd fruits become more meaningful and more relevant. Vegetables may not be as life changing for us as they were for the 10th century farmer who became the King of Burma because of a cucumber, or the millions of 19th century Irishmen who suffered the effects of the potato famine, but they do matter.

If it’s true that we are what we eat, then it must also be true that we are what we have eaten. Consequently, these little histories make it a bit clearer how we came to be the vegetable eaters that we are today. One bite at a time, our stories became linked with what was on our plate. Ms. Rupp’s How Carrots Won the Trojan War assembles a palatable cornucopia of these stories, both satisfying and delicious.

Claire Splan, a member of the Garden Writers Association, is the author of California Fruit & Vegetable Gardening, due out in February 2012 from Cool Springs Press, and blogs about gardening at An Alameda Garden: http://www.alamedagarden.blogspot.com/.