Hovering at a Low Altitude: The Collected Poetry of Dahlia Ravikovitch 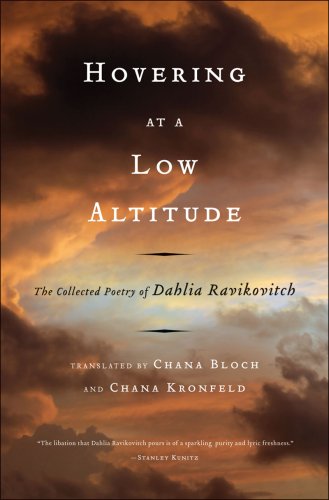 The 2009 publication of the hardcover edition of this book gathered and brought the entire poetic oeuvre of Israeli poet, feminist, and peace activist Dahlia Ravikovitch to English language readers in a single volume. These are sophisticated, intelligent, conscientious, and empathic poems that deserve the widest possible audience, and one hopes the publication of this paperback edition will further that objective. The translations are strong and moving English poems in their own right, and the translators provide both an engaging and informative 20-page introduction and extensive footnotes in the manner of their publisher Norton’s literature anthologies.

Dahlia Ravikovitch was born in Ramat Gan, a suburb of Tel Aviv, in 1936. In 1942 when she was six her father was run over and killed by a drunk army driver, a loss retold in “On the road at night there stands a man,” and to which Ms. Ravikovitch returns in other poems throughout her work. Soon thereafter her mother, Michal, moved with Dahlia and her younger brothers to Kibbutz Geva in the Jezreel Valley in lower Galilee without telling them about their father’s death, which Ms. Ravikovitch learned of two years later from other children on the kibbutz playground.

Unable to adapt to communal living, Ms. Ravikovitch left the kibbutz at age 13 for Haifa where she lived in a series of foster homes. One of her high school literature teachers became an early mentor and introduced her and her early poems to leading Israeli poets of the day. She published her first poems in periodicals at age 18 during her army service, after which she studied English literature and Hebrew linguistics at The Hebrew University in Jerusalem, did graduate work at Oxford, and at age 23 published her first book of poems, The Love of an Orange in 1959. One of the poems in that book, the widely anthologized sonnet “A Clockwork Doll” (literally “A Mechanized Doll”), is an example of a feminist poem written more than a decade before Israel had a feminist movement.

“I was a clockwork doll, but then
That night I turned round and round
And fell on my face, cracked on the ground,
And they tried to piece me together again.

“Then once more I was a proper doll
And all my manner was nice and polite.
But I became damaged goods that night,
A fractured twig poised for a fall.

“And then I went out to dance at the ball
But they cast me aside with the dogs and the cats
Though all my steps were measured and true.

“And my hair was golden, my eyes were blue
And I had a dress with flowers and all,
And a sprig of cherries tacked to my hat.”

The translators point out in a footnote that the “fractured twig” in line eight is an allusion to Chaim Nachman Bialik’s poem “A Twig Fell.” Ms. Ravikovitch’s first two books are formal and in these poems the translators try to find English rhymes that approximate the rhyme schemes in the Hebrew, sometimes at the expense of the literal meaning of the original Hebrew. In line one, for example, “but then” does not appear in the original but is added to rhyme with “again” in line four. For a more literal translation of this poem see T. Carmi’s prose translation in The Penguin Book of Hebrew Verse.

The writer Adam Kirsch has compared “A Clockwork Doll” unfavorably with Sylvia Plath’s poem “The Accident,” and while I have never cared for Ms. Plath’s verbal tantrums, there is an unmistakable resemblance between the two poems (I wonder if Ms. Ravikovitch and Ms. Plath were in England at the same time). Mr. Kirsch also observes that Ms. Ravikovitch’s work is more worldly and less self-focused than that of Confessional poets like Ms. Plath and Anne Sexton.

In her early poems Ms. Ravikovitch frequently employs hapax legomena, words that appear only once in the Hebrew Bible. By using archaic Hebrew vocabulary in Modern Hebrew poems she is following Ezra Pound’s instruction to engage with classical texts and “make it new.” The translators convey the archaic language into English by using the language of the King James translation of the Bible, but in doing so they reverse the process and render modern poems old. Archaic English second person plural pronouns such as Thou and Thy and verbs ending in “th” such as “doth” may make contemporary readers cringe.

In 1969 in The Third Book, Ms. Ravikovitch switched to an informal conversational style in free verse, such as “Portrait,” whose opening lines are,

“She sits in the house for days on end.
She reads the paper.
(Come on, don’t you?)
She doesn’t do what she’d like to do,
she’s got inhibitions.”

Ms. Ravkovitch lived in a modest apartment in Tel Aviv, and worked as a journalist, book reviewer, and high-school teacher. She was married and divorced twice; had a son, Ido, at age 42 in 1978; lost custody of him in 1989; and addressed many poems to him. She was afflicted with clinical depression and lived a reclusive lifestyle neither of which diminished her political activities on behalf of women’s rights, Palestinians living under occupation, and a peaceful resolution of the Israeli-Palestinian conflict. “You are obligated to find the time, and that’s that” she writes in “And sympathy is all we need, my friend” (the title, a line from a British rock song, is in English in the original) from her 1987 book, True Love. The poem concludes:

“Everyone’s thirsty for love
and whoever won’t pour a glass of water for the thirsty
is doomed to gag on his own spit
to the end of his days.”

Ms. Ravikovitch loved and lost several times, like what she describes in “Negligible Sand” from her 1976 book Deep Calleth:

“And again we embraced for an hour or so
and even went looking for a more scenic spot.
When it got late we shook out our clothes
and again I hinted that shouldn’t we consider,
and again I said it’s like crumbling sand,
and what he answered slips my mind.
And there in fact,
there by the sea,
everything slipped through my fingers like sand.”

And from “Hide and Seek:”

“I ask
with a quizzical look:
What else can happen to me
that hasn’t happened to me yet?
I dangle from a cloud
without wings, without a beak
but I don’t fall.
Once when I was in love
I could no longer feel
the cold or the heat.”

The title of this book, Hovering at Low Altitude, is a military term for helicopter patrols. To hover (le-rachef) is also the Israeli equivalent of the American colloquial verb “chill,” but carries a politically disengaged connotation. After Israel’s 1982 invasion of Lebanon some of Ms. Ravikovitch’s poetry became even more overtly political, starting with the section of her 1987’s True Love, entitled Issues in Contemporary Judaism whose poems include “You Can’t Kill a Baby Twice,” about the Sabra and Shatila massacre, and the bluntly titled “Get Out of Beirut.” These poems seem less dated than, say, American poems from the 1960s and early 1970s protesting the Vietnam War, probably because the Israeli-Palestinian conflict is ongoing.

Ms. Ravkovitch’s depression is felt throughout her poetry, which some readers may find emotionally challenging; in several poems that refer to deceased people she envies their deaths. When she died of heart failure in 2005 at first many Israelis mistakenly assumed she had taken her own life. In “True Love Isn’t What it Seems” (also from True Love) she asks, “Do we really love ourselves/even as Jonathan loved David?” She answers her own question,

“Ourselves we love with great devotion,
attuned to ourselves with rapt attention.
And even that amounts to a real improvement,
for just a few months ago
our body was seized by a powerful yearning
to hurl itself urgently from the roof.”

In another poem from True Love, “Light and Darkness,” she writes,

“And who is the speaker here?
A woman who doesn’t know joy
as a natural state.
Who finds no favor in the mirror’s eye,
who’s not at ease.
Wears glasses,
can’t handle details.”

Ms. Ravikovitch was also capable of dark levity as in her eulogy of fellow feminist poet Yona Wallach (who died of breast cancer at age 41 in 1985), who was her temperamental and poetic opposite. Where Dahlia was formal, reserved, and reclusive, Yona (Hebrew for dove) was experimental both in her poetry and her private life as a loquacious attention seeker who fronted a rock band and enjoyed a rather public sex, drugs, and rock ’n’ roll lifestyle. Ms. Ravikovitch displays sardonic gallows humor in her tribute to Ms. Wallach, “Finally I’m Talking”:

“but now, Yona, you’re in an entirely novel condition,
you are one dead girl.
You’re fading and coming closer, shape shifting,
finally you’re colorless, dove white.
An involuntary nobility oozes out of you.
All of a sudden you’ve got inhibitions.
A good girl from a proper home
knows to keep her mouth shut.
Doesn’t utter a peep.

“Yona, with your antics and peculiar disposition,
your grand masquerades
and the show with its lifelong run,
you had a death that was beautiful, human, physical,
and full of grace.”

One of the symptoms of chronic depression is an inability to tell oneself the little lies most of us need to believe to get through the day, but this brutal honesty can also provide mental clarity. Not only was Ms. Ravikovitch unable to avail herself of the false hope that underlies other people’s optimistic outlook, but she also saw through her country’s ideological myths, and as a secular skeptic she rejected religious mythology as well (though her poetry alludes to and borrows liberally from the Hebrew Bible and rabbinic literature, references the translators explain in the footnotes).

As the translators point out, the critic Hamutal Tsamir reads her poem “The Coming of the Messiah” (from The Love of an Orange) as a critique of the messianic impulse in mainstream Zionism. Four and a half decades later in “Metamorphosis” (from the posthumously published Many Waters) she seems to allegorically compare Israeli Jews to a cat that slaughters itself because it wants to become a dog (in previous centuries Diaspora Jews tended to prefer cats over dogs as house pets, because dogs were viewed as too aggressive). But then again the allegory could also apply to Palestinian suicide bombers:

“The cat had a fit. Lashed himself with his tail.
First he raked his left paw with his right,
then stuck out a claw and thrust it in his eye;
the other eye he ploughed in parallel lines.

“When he was drenched in blood, the cat felt best.
He shredded the flesh of his own right thigh,
yanked the left one out as a matter of course.
Soon his body turned into a muddy red mess.

“By no means was he an irrational cat.
He slaughtered himself and suffered no pain,
for he’d longed all his life to become a dog,
sheepdog or wolfdog, it was all the same.”

Chana Bloch enjoyed a several decades long personal friendship and literary relationship with Ms. Ravikovitch and translated several of her books, but rather than simply reprint those earlier translations Ms. Bloch and Ms. Kronfeld have produced a new translation of the entire oeuvre, probably to achieve a consistent voice. A bilingual edition with no more than one poem per page appears to have been beyond the publisher’s budget, but the translators’ invaluable footnotes partly make up for the absence of the original Hebrew.