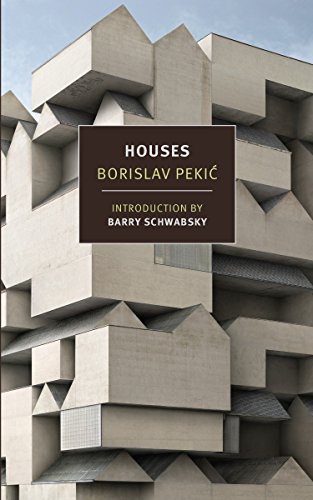 Arsénie Negovan doesn't get out much. For the past 20-odd years, he's maintained a series of properties in Belgrade, Yugoslavia. With a pair of artillery binoculars, he observes his numerous buildings as he begins to write his last will and his memoirs on scrap paper laying about his apartment. These memoirs make up the bulk of Houses, by Borislav Pekiç. Written in 1978, Mr. Pekiç's novel is a delicate farce that exemplifies the best of Yugoslavian literature. Translated from the Serbo-Croatian by Bernard Johnson, the novel chronicles the life of Negovan, itself a mirror for the conflicts of the 20th century.

In Serbo-Croatian the title is Hodočašće Arsenija Njegovana, literally The Pilgrimage of Arsénie Negovan. An odd description for this bombastic Francophile recluse. But the irony of the title reveals itself as the novel unfolds. Due to events beyond his control, Negovan must leave his apartment to inspect his houses. The genius of the narrative occurs as Pekiç interweaves memories and hallucinations together with events happening in the present.

The novel takes place in 1968 as Prague Spring sends a deep crack through the monolithic edifice of Soviet domination. Negovan doesn't bother himself with the specifics of political ideology and current events. After two serious altercations with angry mobs (one in Russia, one in Yugoslavia), he promptly abdicates participating in the outside world. When he finally leaves his apartment, he becomes a Soviet Rip Van Winkle, as Barry Schwabsky describes him in the introduction. The interplay between Negovan's intellectual arrogance and his total obliviousness to the modern world create numerous comedic events in the novel.

Throughout the novel, Negovan regales his both long-suffering wife and French nurse about his family's pedigree. Houses is only one of a seven-novel cycle detailing the lives of the Negovan clan. The cycle, called The Golden Fleece, is comparable to a Yugoslavian version of Zola's Rougon-Macquart series. This sample of Negovan family tragicomedy is a wonderful sample of Yugoslavian literature.

His other works include novels “set in a Heathrow Airport overrun by an epidemic of rabies, on the lost continent of Atlantis, and in a postapocalyptic Siberia in which the last human survives in a world of robots.” New York Review Books Classics should publish the rest of The Golden Fleece, along with Pekiç's other works. Houses offers a fascinating window into literature of the other Europe.