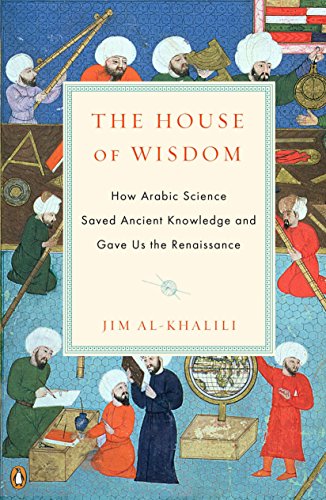 Al-Khalili provides the reader a not just a fascinating history lesson, but also a guide to language, pronunciation, and English spelling of Arabic words. The names of the peoples and places of the Islamic Empire are exotic to the Western ear. Here are a few names and places encountered in The House of Wisdom: the Akkadians, the dynasty of Ur, the Babylonians, Sargon the Semite King of the Arkkandis, King Hammurabi, and Assyrian King Ashurbanipal founder of the library of Nineva.

With the weakening of the Roman Empire at the start of the 5th century, Europe slipped into the dark ages. The center of Roman power moved to Constantinople, the Capital of the Byzantine Empire. The official language of the Byzantine Empire was Greek, the dominant religion, Christianity. The region east of Byzantium was under Sassanid (Persian) rule. By the mid 6th century the battle between Byzantium and the Sassanians over the area today known as Iraq and Iran had been on going for a 100 years. Both empires were exhausted just in time to be conquered by invading Muslim armies that were formed after Mohammed’s death in 632. (The House of Wisdom is complete with glossaries, maps, and timelines to help you keep track of not only who’s who but also who’s where and when.)

The dark ages in Europe lasted approximately 1000 years from ~400 to ~1400 CE. The timeline of European history shows no major advances in science between the ancient Greeks and the European renaissance. For 700 of those years the language of science was Arabic. The Islamic empire in 8th century ranged from India to Spain. By Arab science it is meant the political system of the Abassids, which includes Persians (Persians are not Arabs), and both Muslims and non-Muslims.

The Arab language united the Muslim Empire. Not all Arabs were nomadic tribes, and there were also Christians and Jews living peacefully under Muslim rulers of the time. The Christians were mostly of the Nestorian and Monophysite sects, and there were Jewish scholars living in Spain between the 8th and 11th century. Living in the Middle East before the 7th century were also other religions, the Mandeans and Zoroastrians. Note that it becomes difficult to draw the line on citizenship of empires and nations in ancient times. For example Ptolemy’s efforts in science were undertaken while living in Egypt under Greek governance and is considered Greek science.

Arabs before Islam were pagan, having many gods, and Islam, being monotheistic had much in common with Judaism and Christianity. History of the Muslim golden age, apart from science, is of emperors and caliphs, of palace intrigues, of slaves and concubines, of wars, and payment of tribute, and ransom of prisoners.

One event recounted by Mr. al-Khalili is right out of Scheherazade, an emperor favoring his pure blooded younger son over an older, wiser one, borne of a concubine. The son denied becomes a pretender to the throne and starts a rebellion. In another, during the siege of Baghdad, catapults were used to destroy the city walls. And another the losers of a conflict are graciously invited to dine with the winners, but then killed, right at the table, to remove any possibility of revenge.

Centers of trading and finance before Islam included Mecca and Medina under different names. At the start of the 9th century, Baghdad had a population estimated at 1 million, however no structures of that time survive to today, as all buildings of the time were made of mud brick, even palaces. Al-Khalili presents the history of early Islam, how it became an empire through military campaigns through Syria, Egypt, Iraq and Persia, conquering the Byzantines and Persian Empire. By 732 the Islamic Empire had conquered half of France but finally defeated by Charles Martel, father of Charlemagne.

Education of privileged of this period included the subjects of math, history, poetry, grammar, philosophy, and for Muslims, education also included kalam, practice in theological debate needed to hold one’s own in arguments with Christian and Jewish scholars. The fourth and last of the Rashidun Caliphs, Ali ibn (ibn = son of) abi Talib, was the first imam of Shi’ism. The fighting between the Sunni’s and the Shi’ites goes back to the 9th century between religious literalists and non-literalists over issues of free will and predetermination. Religious tolerance (then as now) was often more successful between religions than between sects within the same religion.

The first emphasis of learning for Muslims was on the interpretation of the Qur’an, and the first book to be written in the Arabic language was also the Qur’an. Arabic science of the golden age is inextricably linked to religion, for example astronomy and related math was important for time-keeping for determining when to pray. Similar to wELY science later in Europe, there is a strong fascination with star charts and astrology.

The dynasty prior to the Abassids, the Umayad provides no evidence of original science but the Abassids inherited from the Persians new wealth and power and so for prestige became patrons of science. That patronage spurred activity in Baghdad known as the translation movement, where for two centuries Greek, Indian, and Persian works were translated into Arabic. From this, open culture of scholarship took hold and became self-sustaining. Science apart from religion gave practical advantages in finance, agriculture, engineering, and medicine.

The etymologic path of translation of Greek texts went first from Greek to Syriac (a dialect of Aramaic), to Arabic, and when the Arab translators improved their skills, directly from Greek to Arabic. Many texts were translated more than once, including Euclid’s Elements. First translated were texts of practical subjects on math and astronomy by Euclid, Archimedes, Ptolemy, then medicine, and only then philosophy, including texts by Aristotle and Plato. As the Empire expanded eastward, Greek texts, which were first translated into Sanskrit are translated from Indian into Persian then into Arabic.

During al-Ma’mun’s reign (786–833 CE), discrepancies were found among translations of Persian, Greek, and Indian texts, and astronomers were appointed to check the accuracy of Ptolemy’s star charts. This begins 700 years of original Arabic astronomy providing a bridge from the Greeks to the later Copernican revolution in Europe. Al-Ma’mun funded research projects involving teams of scholars, built the first Islamic observatories and sent emissaries to retrieve scientific texts, taking books rather than gold as tribute from conquered foreign rulers. A great library called “House of Wisdom” was believed to have been constructed in this period, but like the library of Alexandria of centuries before, nothing of this library remains.

Along with astronomical observatories the Abassid Empire built in Samarkand, in Central Asia, a paper mill. Much technology was created in this period for the production of books including dyes, inks, glues, and book binding techniques, but not the printing press. Arabic script is complicated and wasn’t completely typeset until 1727. The first text printed in Arabic was the Qu’ran. Printed in 1537 in Venice, the text had misspellings, was considered sacrilegious because of this, and which probably lead to the delay of the introduction of the printing press to the 18th century.

Science in the Muslim Empire of the time also thrived for geography and map production. The Muslim Empire hosted archeological digs in Egypt, and sponsored translations of hieroglyphics.

There were also advances in chemistry. Jabir Ibn Hayyan (721–815 CE), known in the West as Geber the Alchemist, was a Yemeni Arab born in Persia, who was less interested in alchemy for purposes of transmutation than in attempting to create life in the laboratory; however, he did have success in expanding the science of practical metallurgy. He conducted his experiments using a documented experimental method and had his work translated into Latin in the 12th century. There are 3,000 written works that have been attributed to Jabir. He could not have written them all.

Today, many words in chemistry have Arabic roots, for example alcohol, alkali, and borax. Mr. Al-Khalili provides some etymology of chemistry’s roots for us, Greek chymeia becomes Arabic al-Kimiya then in Latin alchemia which, dropping the al, becomes chemia the root word for chemistry.

Translations stopped in the second half of the 10th century as they were no longer required. All the great works had been translated, retranslated, studied and commented on. Greek science was replaced by new Arabic texts. Many of the great scientists of the golden age were Persian writing in Arabic, and for purposes of theological debate many Jewish scholars wrote in Arabic, not Hebrew.

Al-Khalili provides many examples of original science in Muslim medicine that I am reluctantly omitting from this review (to keep the review under its word limits) but must note that Muslim medical texts were translated back into Latin and used by doctors in Europe well into 16th century.

This review would not be complete without mentioning al-Khwarizmi (~780–850 CE), who worked in the House of Wisdom as an astronomer and mathematician. He was the inventor of the eponymous algorithm and also introduced Hindu decimal numerals, and algebra to Arabic Empire. Though even within the Muslim world were mathematicians consistently using Arabic numerals, some chose to use the Babylonian sexagecimal (base 60) system.

Mr. al-Khalili provides fascinating digressions. One digression is on the invention of zero, including its etymology, Arabic Sifre becoming Latin Cifra, then in English cipher, but the word was not used for zero. Cipher was first used for any Hindu-Arabic numeral, and only later for any secret symbol. While the Indians may have invented zero, al-Uqlidisi was the first to use decimal fractions (Maybe. That depends on which historian you choose to believe).

Another digression on the history of algebra, Al-Khalili pointd out that Omar Khayyam (1048–1131 CE) was not just a Persian poet but also a mathematician who worked on cubic equations. Khayyam’d solutions were accurate to six decimal places, and because of this accuracy he was able to create a calendar that was correct to one day in 3,330 years.

The first philosopher of Islam was Ishaq al-Kindi (800–873 CE), known in the West as Alkindus, who applied Aristotelian logic and philosophy to the Muslim religion, as well as the first to make the distinction between science and superstition (while still accepting of astrology). Alkindus also added to music theory, and applied cryptanalysis to translation, using the frequency of letters of an unknown text to make better guesses of associations of letters to words.

Another inventor al-Farghani was referred to in Dante’s Divine Comedy by the name of Alfraganus. Al-Farghani created a device used to measure the water level of the Nile, called the Nilometer, which survives today in a museum in Cairo.

Why did the golden age end? Al-Khalili points to three major factors:

1. There was no separation of church and state to prevent an anti-science stance. The Caliph al-Mutawakkil, (847–861 CE) was first to turn against rationalism, and was followed by even more conservative caliphs who actively persecuted scholars.
2. The Mongol invasions of the 1200s, and the destruction of Baghdad in 1258 CE
3. The reluctance to embrace the printing press.

But by admitting doubts a historian must be careful as how those doubts are expressed as that expression may generate doubts in the reader’s mind of what a historian also claims to be true. One should not point out the seams of someone else’s tailoring without being inspected for tailoring oneself, and Mr. al-Khalili exhibits some quirkiness in his assertions. Some historians walk that tightrope better than others, and this comment is not meant to be overly critical, just one point of book-reviewing judgment meant for readers, authors, and editors to ponder.

By all means, if you are curious about Arab, Persian, and Muslim history during the European dark ages there could be no better introduction than this.