The House of Hawthorne 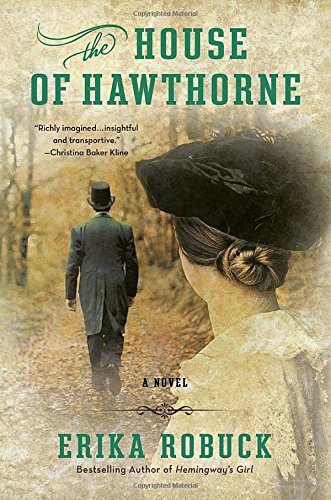 Can art and domesticity co-exist?

That is the essential question of Erika Robuck’s stunning novel, The House of Hawthorne. Narrated by Sophia Peabody Hawthorne, Nathaniel Hawthorne’s adoring and frustrated wife, the novel is a retrospective of the couple’s life together, a life that was by Sophia’s account “. . . at all times and all at once a magnificent and terrible pageantry.”

While the fictional Sophia never once desires to live apart from the husband who covets, respects, and depends on her, she also suffers the unsurprising suppression of her own artistry as her role shifts from bride, lover, and companion artist to hausfrau, mother, and helpmate of the Great Man.

When Nathaniel first meets Sophia, she is newly returned from a sojourn in Cuba with her sister Mary. Guests of the Morrell family on their plantation, Mary spent her days tutoring the children while Sophia was to have rested, avoiding stimulations of all kinds, to suppress her continual migraines; however, the combined and torrid forces of slave society, nature at its most luxuriant, and the first stirring of sexual desire instead catalyze Sophia’s creative powers, resulting in her Cuba Journals.

Placed in Nathaniel Hawthorne’s hands at his bidding before their romantic relationship takes hold, the Cuba Journals reveal to him the longing, the lyricism, and the potency of Sophia’s words and drawings. The journals allow Nathaniel to embrace Sophia’s artistry months before he does her body in the partnership that was theirs from the summer of 1842 until his death away from home in the spring of 1864.

Sophia tells the reader, “Burrowed in my journal is the story that wants me to remember that traveling to Cuba allowed me to emerge from my maidenhood to become the woman—the artist—who would wed Nathaniel Hawthorne.”

Did marriage destroy that woman? Not quite, though it did test her. For years the couple endured a poverty that brought Nathaniel to custom house work, forced the family to move several times, and for a period to submit themselves to Nathaniel’s mother and sisters in the Hawthorne family home.

The couple also lived apart for lengthy periods, while Nathaniel was Franklin Pierce’s consul in England and Sophia and the children decamped to more pleasantly-climed Portugal. Even when together in Rome, the couple suffered tremendous pressure from older daughter Una’s potentially fatal illness. From time to time, persons long recognized for their own artistry and social prominence—Margaret Fuller, Herman Melville, Ralph Waldo Emerson, for example—led Sophia to question her primary place in her husband’s affections.

As Robuck conceives Sophia and Nathaniel, weaving seamlessly the historical record with vividly imagined encounters between the two, neither harbors the sexual timidity so often assumed by those whose background includes Puritan ancestors. Their forthright, satisfying lovemaking permeates the pages of their life together as naturally and as routinely as Sophia’s persistent realizations that she is not making the kind of art she expected to.

On the one hand, when warned not to lose herself while attending to others by Fuller, Sophia bristles. On the other, when Sophia surrenders to her painting, the “. . . result is infirmity. . . .” From physical and psychological strain? From over-expenditure of limited energy? From internal pressures between private desires and public demands? Such juxtaposition is not resolved in the novel. Perhaps it cannot be resolved in life, either.

After having created a bust, Sophia’s head pounds, and she quotes Nathaniel as saying, “You must not strain yourself so. Creating that bust has brought such a dreadful return of your headaches. . . . You must not allow yourself to be agitated, even if it means that you do nothing but take milk and bread by the fireside for the rest of your days.”

Furious at him, she replies, “I do not want milk and bread. I want wine and joy. I want our creative communion to begin—you at your desk and me at my easel.  Our new Eden. I want it now!”

Readers will be as provoked as they are pleased by this book. Does Sophia Peabody Hawthorne seek a Utopia never to be found on earth? Is Nathaniel Hawthorne, who conceived and birthed the iconic Hester Prynne, constitutionally unable to imagine a non-conformist wife? Did Sophia’s mother rightly advise her daughter against both marriage and a fully-realized artistic career?

Early in the narrative, Sophia herself offers a point of view that numerous female artists have explored: “I begin to realize it is those around me who wish to suppress [my artistry], because they fear what will happen if I allow my full power to be realized. They have wanted my sterility to keep my passions at bay, and have even encouraged me in my infirmities because they wish to contain me.”

When Una, the oldest of the three Hawthorne children, suggests to her mother that, ”You should paint again,” the artistic and the domestic merge. “Do,” says Nathaniel. “I am eager to see such a creation at this juncture, now that you have so much more of life’s wisdom.”

Angry feminists will roar. Does the “now” to which Nathaniel alludes mean “now” that the children have grown, “now” that I am monetarily successful, “now” that you need not support me full time?

Others will contend that Sophia’s own, more moderate conclusion, holds sway: “Our love is a work of art. It is the great masterpiece of my life because it has been rendered over decades.”

Even Margaret Fuller succumbed to it. Sophia listens to friend Emelyn Storys’ recounting: “Margaret was a changed woman in Italy. I had known her in Boston, and thought her arrogant and off-putting.But here she . . . bloomed in the glow of love from her soldier Giovanni and their son, Angelo. She was a testament to the graces of perfect love in an imperfect world, and though she met a terrible end [death by drowning at sea], her life was not a tragedy. She was greatly adored and admired, and can any of us hope for more?”

If the historical Sophia Peabody Hawthorne gave up art for love, Robuck’s imagined protagonist by the same name does not. Unlike her husband who, as noted by numerous historical sources, feared revealing himself to his public, she tells all. “I must share his life, because the world needs his story, my story. And in our story, the romance of the Hawthornes, I will have the final word.”

And so she does.